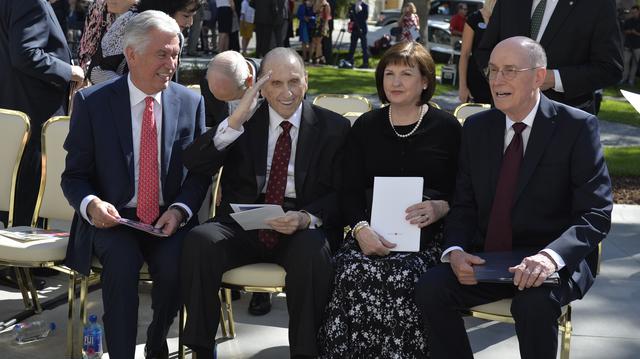 A historic mansion in downtown Salt Lake City has been renamed the Thomas S. Monson Center after the current president of The Church of Jesus Christ of Latter-day Saints. The Church donated the former Enos A. Wall Mansion that once housed LDS Business College to the University of Utah in 2014.

For the past two years, the mansion has undergone extensive interior and exterior renovation. The east building has been demolished and the original east entrance restored, and the gardens have been landscaped to create an added level of beauty to the area.

“How very fitting that this beautifully restored building bear the name of President Thomas S. Monson,” said President Henry B. Eyring, first counselor in the First Presidency, during an event Wednesday, August 24, 2016, to commemorate the reopening of the building.

President Monson attended the event along with President Dieter F. Uchtdorf, second counselor in the First Presidency; the Presiding Bishopric; members of the Quorum of the Twelve Apostles; and other Church, business and community leaders.

“Just as President Monson has reached out to people from every background and walk of life, this center will draw in individuals and organizations from the local and global community to engage their minds and hearts in creating ideas and programs that change lives, communities and nations for the better,” explained President Eyring.

The refurbished 50,000-square-foot building will be the home to the Kem C. Gardner Policy Institute. The institute, located on the second floor, will develop and share economic, demographic and public policy data with business and community leaders. The mansion, located at 411 East South Temple, will also host community events on the first and third floors.

“We hope this new center will encourage interaction between the University of Utah and the community it serves,” said David Pershing, president of the University of Utah. “Our goal is to leverage this iconic building and adjacent structures as an asset to Utah’s economic growth and development and help unite business executives, policymakers and academic authorities to not only support the local economy, but to conduct research that influences thought leaders throughout the nation and world.”

“The First Presidency has every confidence that the University of Utah will utilize this special place for its highest and best purpose on behalf of its students and faculty and the people of Utah, the nation and the world,” said President Eyring.

The building, completed in 1880, was originally owned by James Sharp, former University of Utah chancellor and mayor of Salt Lake City. In 1904, it was purchased by mining magnate Enos Wall, who hired renowned Utah State Capitol architect Richard K. A. Kletting to transform the mansion. Wall lived there until 1920. The building was used as the Salt Lake Jewish Community Center for several years until it was purchased by the Church in 1961. The Wall Mansion was home to LDS Business College from 1962 until 2006.