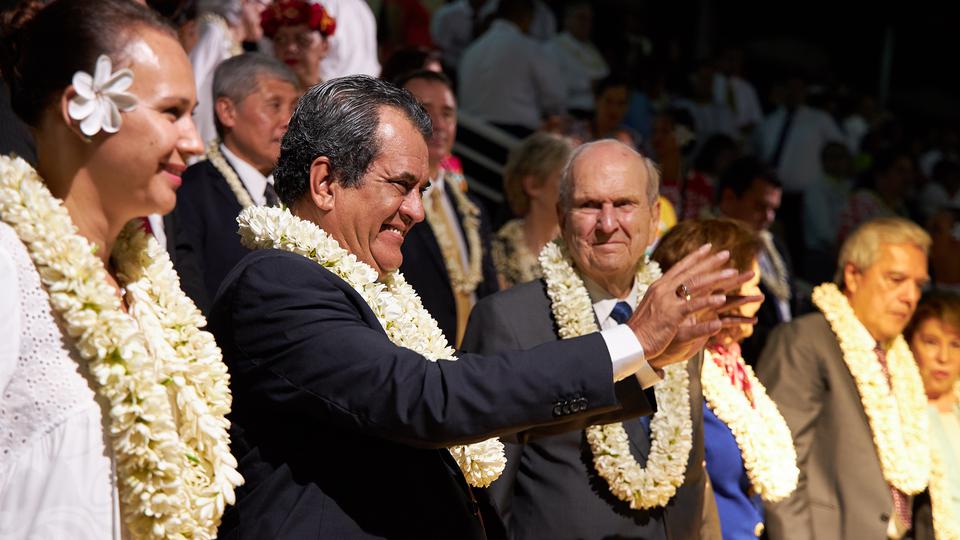 “There’s trouble ahead. … Prepare for attacks from the adversary. Please protect yourself from Satan’s traps, including harmful drugs and pornography,” warned President Russell M. Nelson of The Church of Jesus Christ of Latter-day Saints, as he concluded his nine-day Pacific ministry in Papeete, Tahiti, the capital of French Polynesia.

President Nelson met with French Polynesian president Édouard Fritch on Friday prior to the 175th anniversary cultural program celebrating the arrival of the first missionaries to French Polynesia.

President Nelson and his wife, Wendy, hosted President Fritch and the First Lady. They were accompanied by Elder Gerrit W. Gong of the Quorum of the Twelve Apostles and his wife, Susan.

“I would like to thank you all for your tremendous contribution to our country,” said President Fritch in opening remarks at the celebration. “It’s a pleasure to be side by side with you all. Happy birthday to The Church of Jesus Christ of Latter-day Saints.”

“Our people should know that the Church was established here in French Polynesia before the pioneers ever got to Utah,” said President Nelson.

More than 12,000 members and friends of the Church attended the cultural celebration and devotional held afterward in Pater Stadium, which was also broadcast to congregations across Tahiti.

Before leaving for the stadium, the global faith leaders met with other government leaders and dignitaries from the Pacific island, where French is the official language.

Tahiti is a major tourist destination. The island, known for its black sand beaches and rain forests, was created by volcanic activity. More than 26,000 Latter-day Saints live in Tahiti. In May 1843 — just 13 years after the Church was organized in the United States — four men were sent by the Prophet Joseph Smith to be missionaries in the islands of the Pacific.

The Oceania geographic region has 10 operating temples, including the Papeete Tahiti Temple, which was first dedicated in 1983 and rededicated in 2006 following remodeling.

President Nelson’s travels have taken him to six of the seven continents, excluding Antarctica, since being sustained.