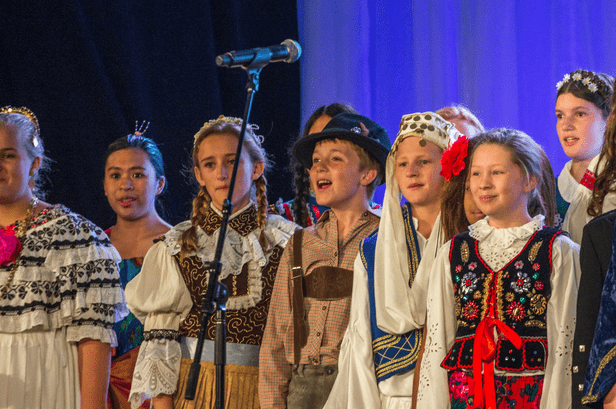 Meridian Magazine will be covering the events at the World Congress of Families all of this week in a series of articles.

The woman in the elevator by me at the World Congress of Families, which started yesterday in Salt Lake City, was from Portugal. When I asked her why she had come, she said, “It is so good to know that when you support family, you are not alone. Look at all these people.” she gestured as the door opened onto the lobby, where 3,000 attendees from all over the world had been milling through the day. “It gives me hope.”

The World Congress of Families is the premier global gathering of parents, youth, lawmakers, scholars, religious leaders, and advocates united to affirm, celebrate and encourage the natural family. It began Oct. 27, with a keynote address from Elder M. Russell Ballard, and continues through Oct. 30 at the Grand America. It has been held in Prague; Geneva; Mexico City; Amsterdam; Madrid; Sydney; and Warsaw, Poland, but never in the United States — until now.

In a world that seems ever more determined on the destruction of family and the values that support it, my new friend in the elevator nailed what the purpose of the gathering is– to energize, strategize and infuse hope to those who are fighting the most important human rights battle of our time–the cause of the family and children, who are the most vulnerable citizens of our world.

Stan Swim, the chairman of World Congress of Families IX and of the Sutherland Institute who is hosting this event said the Congress got its start because of a group of Russian academics who were concerned about the dwindling state of their society after the fall of Communism. They came upon Allan Carlson’s work about families and invited him to Moscow for an academic dialogue. When they asked, how do we get our communities back on our feet, they realized that you do that by renewing family and faith.

In this conversation with the Eastern bloc, the academy and the cloth began talking about families and religious freedom, and it’s been that way ever since at this Congress. The Congress started as an exchange of ideas about how to re-invigorate the family and civil society, and the dialogue continues.

Swim said, “The thing that’s unusual about the WCF is that it doesn’t have programs that go out into communities. The conference is where people who do that gather to trade ideas, build networks, exchange best practices and learn organizational treatment and development. People then go home and then boost the capability of their own organizations.

“Wherever the WCF has gone, it has left stronger family advocacy and support groups behind. There has always been a stronger family-oriented movement when the Congress is done.”

Though the attendees at the Congress are not of one political stamp, some things unite them all–the belief in the dignity of life, including that of the unborn, the idea that children are good for societies, that the natural family is the best place for children to be reared, that marriage should be encouraged and that the sexual revolution has left a tsunami of wreckage in its wake.

When the family dissolves, a fragile, dysfunctional society is a consequence.

Swim said, “It is the broad perspective of the Congress that the way to address these social pathologies is through the ideal of a man and a woman married to each other and devoted to their children. We understand that it is an ideal, and we believe that compassion and a helping hand should be extended to something that looks different than that, however, this is not a Pollyanna notion.

“To say this is the ideal may not be politically correct, but it is not compassionate to hide the truth from people. Here’s a parallel. We know that education is important for people. What if we hid that from them so nobody’s feelings would be hurt? That would not be compassionate, even though we know that everyone isn’t successful in college. You want to get as much education as you possibly can for your well-being in life.

“Marriage is the same thing. It is not a good idea to hide the ideal of marriage from people. There is power in aiming at the ideal, even if you fall short. You go further than if you aim somewhere else. You’ll never go higher than you aim, so you might as well aim for the best.”

Retreat from Marriage and Family

Swim said, “The retreat from family and religion tend to be mutually reinforcing. As people have more difficult experiences in their family and break the commitment of marriage, people tend to be less interested in faith and vice versa. People who have strong families seem to be more religious, and people who are religious tend to understand family differently.

“When you say you have a religious commitment you are holding yourself accountable to ideals bigger than yourself. If you step away from religion, you have less reason to see commitments in the same way.

“You can see the vicious cycle that results in a culture that continually devalues commitment. You get people who don’t trust anything. Multi-generational, non-marital patterns begin to emerge. Gangs thrive because people are looking for a sense of belonging. It should be provided by the oath between their parents, but if not, they go looking for it other places.

“You can see why gangs have an appeal – a band of brothers. People turn to that trying to address the same need for belonging. The flipside is the virtuous – you get societies that don’t need a lot of outside help to solve problems. You have a family that is committed to solving their problems internally. They have stability to start from instead of the instability.

“What marriage does at its best is give people that kind of emotional and social foundation underneath them.”

Swim said, “One can lament what’s going wrong or you can look at what happens when faith and family work well.

“Charles Murray in his book ‘Coming Apart’ describes how the class divide in America has shifted from being more racial to one that has to do with marriage. Elites have told the blue-collar workers that marriage doesn’t matter and the response has been a falling apart economically. They have lost what would be the first rung on the ladder–stable, married families– for helping people rise up because they were told it doesn’t matter.

“At the same time, Murray documents that the upper class of society, the better educated folks are getting better at marriage and valuing it. They understand the importance of getting it right. Their success at marriage is propelling their success elsewhere in life.

“If a woman is college-educated, the likeliness of her having a child out of wedlock, is not very high. These women want to have children in a stable, relationship with a partner who is going to stay with them.

“The elites really ought to be preaching what they practice,” Swim said. “They ought to turn around and help the economically disadvantaged understand why marriage is so powerful and the importance of getting the family right.”

Maggie Gallagher, one of the foremost experts on marriage in the nation says, “We don’t talk enough about the power of an average, good-enough marriage. It doesn’t have to be perfect to be powerful.” Everybody needs a little help on the way to that ideal.

Is there Hope in this Battle to Save the Family?

Those working to celebrate the family say that two trends are very hopeful. The first is the example of the pro-life movement which has been steadily chipping away at its goal for 40 years. What used to a movement populated mainly by worried grandmothers who put on rallies where only a handful of people showed up has seen a two-generation jump. Now it is their grandchildren who really seem to know what they are protecting. Young people are tremendous advocates for the value of life.

Swim said, “It is easy to look at the rising generation and say things are getting worse. Not in the pro-life movement.”

That’s also true at the conference in general. Young people at the Congress represent about 1/5 of the attendees and they care passionately about the family issues. That’s a good sign for the future.

The Long-lasting Value of the Conference

If you need a litmus test to see how effective the World Congress of Families is, you can judge by the battle the Human Rights Campaign has tried to wage over the years at the event. In some cities they have worked to see if the venues would refuse to host them. They have run a smear campaign. Ultimately this has been fruitless.

What is powerful however is to see the fruit of the Congress. Many people and organizations who lead out in countries of the world in protecting family got their start at an early World Congress of Families meeting in Geneva. In the realm of standing for family there was a before-Geneva and an after-Geneva.

Should We Be Concerned?

Stan Swim said, “It’s hard to look at the current situation with the family and not be concerned. But I don’t think we have just been called to be concerned. We have been called to approach this from a perspective of optimism. We are all called to lift where we stand and the people who come to the Congress will have a better idea of how to do that. We think attendees will be better advocates for their family and their community.

“As people of faith, we are not to look around in despair. This is not the Christian way. We have to be conscious of what’s happening in the world, but not troubled. If we don’t roll up our sleeves and get to work, I don’t think we’ve internalized the real purpose of our faith.

“We need to document and understand our situation and then turn around and see what we can do to help improve it.

“When we fight for issues, we will live up to our Christian beliefs and treat our opposition kindly, while at the same time living up to our religious principles. We will defend them with grace and civility, but we will defend them.”

Outstanding summary Maurine. As an attendee this has been truly a great event to be a part of. Can't wait for days 2, 3 and 4!