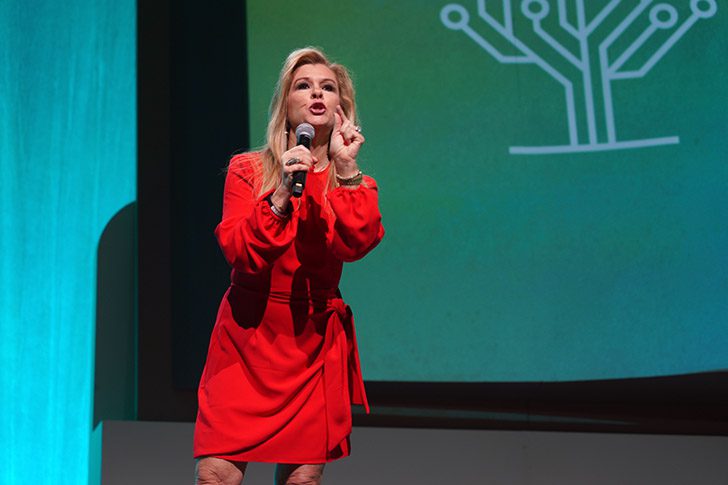 Leigh Anne Tuohy is as feisty, as determined, and as compassionate as she is portrayed by Sandra Bullock in the beloved movie The Blind Side. Yet, it wasn’t her Southern, Tennesee charm or her humor that made her bring tears to the audience at RootsTech 2020 this week. It was her message that everyone has worth and one person can make a huge difference in the life of someone else.

She knows, because she did it. She didn’t see when she adopted the 6’6” Michael Oher, who had been tossed from one foster home to another his entire life, that he was bound for unanimous All-American honors at the University of Mississippi, nor that he would be a first round 2009 NFL Draft. She certainly didn’t know that her story would become a movie. From her stance of 5’ 2”, she just saw a big boy who needed her help, and something just compelled her to step up.

The Tuohys were on their way to breakfast one Thanksgiving day when something happened. “This is nothing we expected that we ever thought would happen,” she said. “We have a sign plastered across the back of our driveway wall, ‘We believe in miracles.’ This would be one of them.

As they passed him, she turned to her husband and said, “Turn around. I think that is that guy who goes to school with Collins.” She said, “You have to know that I wasn’t looking for a third child.”

She jumped out of the car, stopped the young man and said, “I am Leigh Anne Tuohy. I think you go to school with my kids. I’m not leaving until you come with me. Where are you going?”

Michael answered that he was just going to school.

“No, you aren’t. The school is closed because it is a holiday. We’re taking you to breakfast with us.”

Yet, all through the weekend, Leigh Ann Tuohy couldn’t get Michael off her mind. “Why was he there? Who is that kid?”

That Monday morning she went to the principal’s office and marched in and said, “What can you tell me about Michael Oher?” He leaned over and said, “Miss Tuohy, you don’t need to get involved. He’s not going to make it.”

What did he mean? she wondered.  Surely, he wasn’t talking about the basketball team. Michael is 6’ 6” so he could surely make that.” No, the principal meant something deeper, that to help Michael was useless. “He’s never done this. He can’t do that.”

Leigh Anne said, “I’m just looking to take him shopping to get a long pair of pants and a long-sleeved shirt.”

She found what class he was in. When the bell rang he appeared in his shorts and short-sleeved shirt again. She said, “How would you like to go get a pair of pants and a couple of long-sleeved shirts?” He didn’t hesitate. He said, “I would really like that.”

She picked him up and took him shopping, and helping him became their life. “Our lives turned around just like that. Who knew this was going to be any relevance, that it would make a difference?”

All she knew was that very soon, he was her son and she went from having two children to three. It meant having two to three tutors come in every day from Sunday through Thursday to catch him up in school. He meant building Michael and loving him and watching out for him.

A Story for the Screen

Leigh Anne’s husband, Sean, has a friend named Michael Lewis who had written books and did a regular Sunday column for the New York Times supplement. When he learned about the Tuohy’s adopted son, he wrote an article about them which was so wildly successful he expanded it to two chapters of a book.

Two days after the book was published, it was sold to become a movie. She was told, “This will never become a movie, so don’t worry about it.”

The project sat on the shelf for 18 months and then Warner Bros acted on it. Their biggest search was to find someone who could play Michael’s part. It had to someone raw and vulnerable and much in need.

By the time, they were looking for that part, Michael himself was no longer so vulnerable. He had become a confident young man. Leigh Anne said, “You offer someone in need hope, love and an opportunity and it changes their lives.”

From the first movie returns, they predicted that The Blind Side would make around $14 or $15 million. Yet the movie has grossed over $450 million dollars.

“They figured what New York would do,” she said, “but they never figured that the people in Salt Lake City or Moline or all across the country would do.” Ordinary people look at this movie and relate to it. They say, “I want to make a difference. How can I do that?”

Last year, The Blind Side was the most-watched movie on Netflix. Leigh Anne said, “It’s a movie that says that’s who we want to be. That’s who we can be.”

Movie Trailer for The Blind Side:

Living with and Loving People Who Don’t Look Like Us

“We look at people and we size them up,” Leigh Anne said. “They need a bath. They smell bad. They have holes in their shoes. Where did they get that shirt? And that’s what they said about Michael. Society deemed him valueless. Can you imagine if someone as valuable as a Michael Oher almost fell through the cracks, who else gets left behind?

For Michael it was five steps forward and eight back. “Don’t give up,” she told him. “Keep the fight going.”

People sometimes ask Michael if he still sees the Tuohys. He sometimes takes offense at that. “Do you talk to your parents?” he asks back.

“We got far, far greater than we ever gave,” Leigh Anne said.

You can see Leigh Anne Tuohy’s full talk at this link:

Thank you for helping us to listen to Leigh Anne Tuohy's story. I have shared it with quite a few people. I LOVED it! And, We also have the DVD:)

It was so great to be at RootsTech and watch Leigh Anne’s presentation! It’s the kind of life changing experience anyone would want to share with their children and grand-children! And with the full video on the web it is easy! Thanks RootsTech