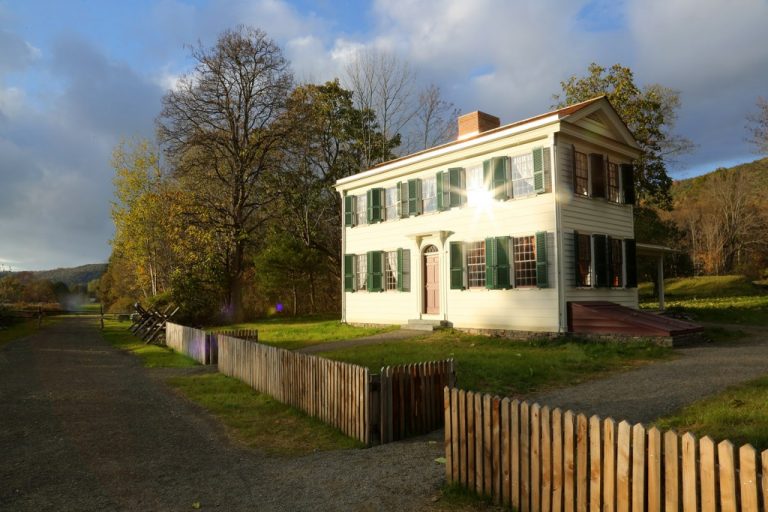 Enhance your study of Church history with the Treasures of the Restoration jigsaw puzzle.

Joseph Smith’s father in law, Emma’s father, the hunter and farmer and innkeeper Isaac Hale (17763-1839), was anything but a fan of his son in law.  He had disapproved of Joseph’s past money-digging and he strongly disapproved of the marriage with Emma.  A year after their marriage, though, Joseph and Emma left Palmyra, New York, for a small cabin on the Hales’ property in Harmony township — modern Oakland township — on the bank of the Susquehanna River in Pennsylvania.

Mistrustful of Joseph and skeptical of Joseph’s claims about the Book of Mormon, Hale confronted him on the subject, demanding to see the plates.  Joseph responded that he had been commanded to show them to nobody except by divine command.

Still, Joseph permitted Hale to lift the wooden box that, he said, contained the plates.  Of this relatively little-known experience, Hale later recalled that

I was allowed to feel the weight of the box, and they gave me to understand, that the book of plates was then in the box—into which, however, I was not allowed to look.

Holding the box failed to mollify Isaac Hale, who said that he was

dissatisfied, and informed him [Joseph] that if there was any thing in my house of that description [the plates], which I could not be allowed to see, he must take it away; if he did not, I was determined to see it. After that, the Plates were said to be hid in the woods.

Now, as Book of Mormon witness statements go, Isaac Hales’s is of at most only modest significance.  Still, it’s not absolutely without value.

Friendly skeptics and historians of religion who would prefer not to commit themselves on the truth or falsity of Joseph’s prophetic claims find it much easier, on the whole, to regard him as a sincere person who was telling the truth (as he perceived or imagined it to be) about his subjective mental and spiritual states.

However, his handing of a heavy box to Isaac Hale in which, he claimed, the plates were hidden gives a tangibility to the matter that makes it more difficult — not quite impossible yet, but definitely more difficult — to maintain that Joseph’s experiences were purely personal and subjective.  This palpable object seems to point, instead, to either genuine authenticity or deliberate fraud.  It begins to confront us with a very stark either/or choice.

Thank you for posting Dr. Peterson's comments and remarks. I learn something each time I read them, even if it's a new perspective on a story I've heard before.