The Significant and Ancient History of the Hosanna Shout | Meridian Magazine 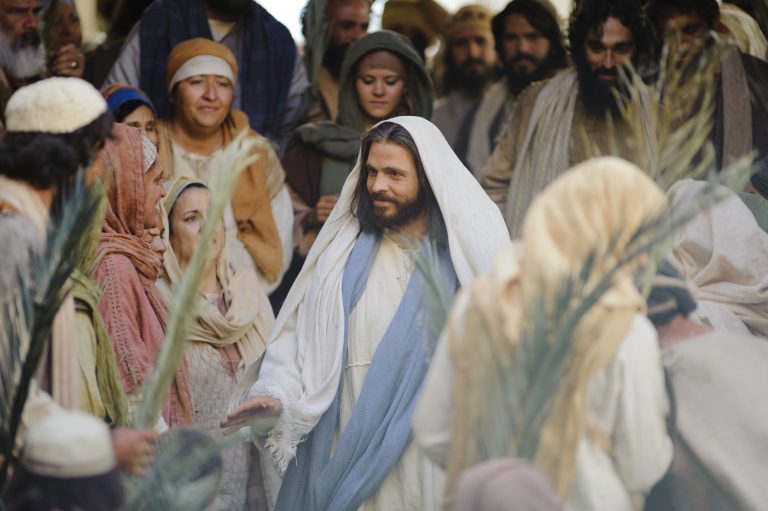 The Significant and Ancient History of the Hosanna Shout

During Sunday morning’s General Conference, the entire, worldwide membership of the Church was invited in a Solemn Assembly to join their many millions of voices together in one sacred Hosanna shout that would spiritually ring across the globe.

It was a unified rejoicing on this 200th anniversary of Joseph Smith’s First Vision that, according to President Russell M. Nelson, “reaffirms what young Joseph experienced that day in the Sacred Grove—namely, that the Father and the Son are two glorified Beings whom we worship and praise.” The Spirit was strong in celebrating that the heavens were open and God’s children were invited to “hear him.”

The restoration had begun to institute the gathering together of all things in one and bring Jesus Christ’s true, ancient gospel back to earth. This is something to celebrate.

The words “Hosanna, Hosanna, Hosanna to God and the Lamb” were repeated three times followed by “Amen, Amen, and Amen,” while everyone waved a white handkerchief.

The last solemn assembly happened on March 31st, 2018 when President Nelson was sustained as the church’s 17 president and prophet. Hosanna Shouts in recent years have largely been reserved for the dedication of temples, where they affirm that with the dedication of house of the Lord is completed and acceptable to Him.

In a rarer instance, an Hosanna Shout was given in the October 2000 General Conference prior to the dedication of the Conference Center.

What exactly does Hosanna mean, this shout that is reserved for such major spiritual rejoicing? According to Taylor Halverson, whose article about the  Hosanna Shout is on this magazine, “Hosanna is a beautiful Hebrew word that is formed from two other Hebrew words. The hosa portion of the word means “to save” and is actually in the aommand form meaning “save!” Na mans “please!” So the express meaning of hosanna is “please save!” or “please save us!”

The scene we first remember when we think of the word hosanna is Christ’s triumphal entry into Jerusalem on the Sunday of the week when he was crucified. Riding on a donkey, in fulfillment of prophecy, the people waved palm fronds and lined his path while they shouted, “Hosanna, Blessed is he that cometh in the name of the Lord.” “Hosanna to the Son of David…Hosanna in the highest.” “Hosanna: Blessed is the King of Israel.” (See Mark 11:9, Matthew 21:2, John 12:13).

We learn here something surprising. When the chief priests and scribes rebuke him for allowing the crowd to praise Him in this way, Jesus answers. “I tell you that, if these should hold their peace, the stones would immediately cry out.” (Luke 19:40).

This suggests that nature itself would cry out “Hosanna” if it had a tongue to.

Yet, what had riled the chief priests and scribes is they understood the history of what Hosanna meant.  At the Feast of the Tabernacles, celebrated each year, the Lord’s deliverance of Israel out of Egypt into the Promised Land was remembered while palm branches were waved and the people chanted the words from Psalm 118. In verse 25, the people chant “Save now, I beseech thee, O Lord: O Lord, I beseech thee.”

In crying “Hosanna” the people were recognizing Christ as the long-awaited Messiah, associated with their ancient delivery. They were expressing not only adoration, praise and joy, but also a spiritual memory.

Around the Throne of God

John sees the throne of God in Revelation and describes “a great multitude, which no man could number, of all nations, and kindreds, and people, and tongues, [standing] before the throne, and before the Lamb, clothed with white robes, and palms in their hands.”

It is the same scene, now in the eternal worlds, with the crowd numberless. They have palms in their hands. And, what of all things are they saying? Hosanna. Or at least, the meaning of Hosanna.  They “cried with a loud voice, saying, Salvation to our God which sitteth upon the throne, and unto the Lamb.” (Rev. 7:9, 10).

This begins to give us a sense of how sacred the Hosanna Shout is.

When Nephi prayerfully seeks to understand the tree of life vision that his father Lehi had, the Spirit of the Lord comes to him and asks if he believes all the words of his father. When Nephi said, “I believe all the words of my father,” The “Spirit cried with a loud voice, saying: Hosanna to the Lord, the most high God; for he is God over all the earth, yea even above all. And blessed art thou, Nephi, because thou believest in the Son of the most high God; wherefore, thou shalt behold the things which thou hast desired.” (1 Nephi 11: 5,6).

Christ’s Visit to the America’s

The very essence of hosanna is gratitude, along with a moving sense of what the Lord has done for you. By this time in our discussion, it isn’t surprising what happened when the risen Lord, came to the America’s and allowed all of the people one by one to come to Him and examine the wounds in His hands and His feet. With this sure witness, “they did cry out with one accord, saying: Hosanna! Blessed be the name of the Most High God! And they did fall down at the feet of Jesus, and did worship him.”

How like our experience with the Hosanna Shout we experienced Sunday. Though the COVID-19 pandemic has separated us and General Conference was held in a barren room of empty chairs, in our living rooms across the world, we too cried out “with one accord” our witness of the Savior.

We know, of course, that in our dispensation, the Hosanna Shout was a part of the Kirtland Temple dedication, in the way that has become a practice in all temple dedications since then.

The dedication prayer noted, “And help us by the power of thy Spirit, that we may mingle our voices with these bright, shining seraphs around thy throne, with acclamations of praise singing Hosanna to God and the Lamb! And let these, thine anointed ones, be clothed with salvation, and thy saints shout aloud for joy. Amen, and Amen.” (Doctrine and Covenants 109: 79, 80).

A particularly moving Hosanna Shout happened during the April 1892 General Conference, when President Wilford Woodruff directed the laying of the capstone on the Salt Lake Temple. According to the Church News,

Some 50,000 Latter-day Saints filled Temple Square and adjoining streets. “The Tabernacle Choir performed a special temple anthem. President Joseph F. Smith offered a prayer and the choir then sang ‘Grant Us Peace.’ Then as President Woodruff lowered the capstone into position, the congregation waved white handkerchiefs” and gave the Hosanna Shout.

In his article “What is the Hosanna Shout”, historian Reed Durham made a list of historical events other than temple dedications when the Hosanna Shout was given, showing, in fact, how rare the event is.

1. At the close of the famous Sidney Rigdon Salt Sermon at Missouri in 1838

2. By the twelve before leaving for their missions to England, 1838

3. Upon arrival on English soil, Brigham Young and the rest of the Twelve with him, April 6, 1840

6. Upon entering the Salt Lake Valley for the first time

9. Occasionally, at a ward or stake conference.

Durham quoted B.H. Roberts about the feeling behind the Hosanna Shout. “It is impossible to stand unmoved on such an occasion. It seems to fill the prairies or woodland, mountain wilderness or tabernacle, with mighty waves of sound; and the shout of men going into battle cannot be more stirring. It gives wonderful vent to religious emotions and is followed by a feeling of reverential awe—a sense of oneness of God.”

B H Roberts captures most of what I felt having participated in Sunday conference. At the end of both sessions Sunday my heart was ready to burst i was so moved by the Spirit. And as I stood alone in my house I felt a oneness as we shouted with one accord. Thank you for more insight.