The Savior’s Invitation to Dine at His Table | Meridian Magazine 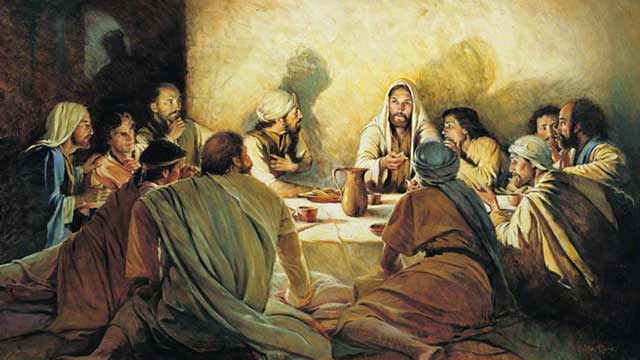 The Savior’s Invitation to Dine at His Table

To all Readers: What other publication in the world understands you and your context like Meridian Magazine? Will you please help us keep publishing? It’s our annual voluntary subscription campaign: Please CLICK HERE to SUBSCRIBE.

The scriptures give many examples of eating, and with the holidays coming, I have been thinking about eating—who to invite and what to serve. The main purpose of eating, of course, is to sustain life, but if a social and/or spiritual aspect is added, eating can become dining. For example, Jesus extends a weekly invitation to dine at His table. The bread and water served at the sacrament table is not enough food to fill an empty stomach but more than enough to satisfy spiritual hunger.

“And as they were eating, Jesus took bread, and blessed it, and brake it, and gave it to the disciples, and said, Take, eat; this is my body. And he took the cup, and gave thanks, and gave it to them, saying, Drink ye all of it; for this is my blood of the new testament, which is shed for many for the remission of sins” (Matthew 26:26-28).

About five years ago in our ward we had a departing missionary and a returning missionary speak in the same sacrament meeting. The congregation seemed quadruple its normal size with many extra friends, families, and children. Everything seemed normal until the sacrament song ended and the kneeling priest began the sacrament prayer, “O God, the Eternal Father.” Suddenly, a sacred stillness fell over the congregation, almost like a cloud, and the room filled with a palpable spirit no baby or young child interrupted. It felt sweet, peaceful, powerful, and personal. I wondered if I was the only one so enwrapped.

About three months later, a couple that had just moved into the ward spoke in sacrament meeting. The wife said something like this: “Before we signed the contract on our home, we came to a sacrament meeting here in your ward. We wanted to feel the spirit of the people we would be living around. As I recall the two speakers were a departing and a returning missionary, but that was not the memorable part. During the sacrament, the Spirit settled over the congregation, almost like a cloud. I had never experienced anything like it except one time at a temple dedication. As we drove home that day, I said to my husband, “If that’s the way this ward does the sacrament, I want in.” By choosing to dine with Jesus, we open ourselves to spiritual experiences as other scriptural accounts show.

We can invite Him. About sixty-three years before Jesus’ birth, Pompey the Great, the Roman general, laid siege to Jerusalem, ending Jewish independence. As an occupied people, the Romans forced the Jews to pay taxes. Publicans, usually Jews hired by Rome, collected these taxes. The Jews despised their fellow countrymen who worked for the Romans. Levi was one of these tax collectors. One day he prepared “a great feast in his own house” for “a great company of publicans.” He invited Jesus to join them (Luke 5:29).

He may invite himself. Zacchaeus was the chief publican in the town of Jericho. He was rich and he was short. When Zacchaeus heard that Jesus had come to Jericho, he wanted to see Him as did many others. Zacchaeus could not see over the crowd, so he ran ahead and climbed a tree. “When Jesus came to the place, he looked up, and saw him, and said unto him, Zacchaeus, make haste, and come down; for today I must abide at thy house. And he made haste, and came down, and received him joyfully” (Luke 19:2-6).

He may invite guests who refuse to come. Jesus spoke a parable about a lord who “made a great supper” and invited many guests. When everything was ready, he sent his servant to tell the invited guests it was time. One by one the invited guests made excuses why they could not attend. The servant returned to his lord and reported that none of the invited guests would come. The lord said, “Go out quickly into the streets and lanes of the city, and bring in hither the poor, and the maimed, and the halt, and the blind.” The servant did as he was told saying, “It is done as thou hast commanded, and yet there is room.” The lord told the servant to go “into the highways and hedges, and compel them to come in, that my house may be filled” (Luke 14:21-23).

He cares about physical hunger. The multitude that had come to hear Jesus preach in the wilderness had not eaten for a long time. He expressed concern that they might faint from lack of food on their way home. So he told the people to sit down on the ground. Taking “five loaves and… two fishes, and looking up to heaven, he blessed, and brake, and gave the loaves to his disciples, and the disciples to the multitude. And they did all eat, and were filled: and they took up of the fragments that remained twelve baskets full. And they that had eaten were about five thousand men, beside women and children” (Matthew 14:19-21).

He helps His disciples feed their families. At least two times when Peter was fishing, he followed Jesus’ instructions as to where to let down his nets. “And when they had this done, they inclosed a great multitude of fishes: and their net brake. And they beckoned unto their partners, which were in the other ship, that they should come and help them. And they came, and filled both the ships, so that they began to sink” (Luke 5:6-7). Another time Peter and some of the apostles went fishing and Jesus again advised them where to put down their nets. “They cast therefore… and drew the net to land full of great fishes, an hundred and fifty and three: and for all there were so many, yet was not the net broken” (John 21:6, 11). Fish was a cash crop that could provide for their families while they were in fulltime service to the Lord.

His invitation may require readiness. Jesus likened the kingdom of heaven to a wedding celebration in which He is the bridegroom. Ten young women wanted to attend the festivities. The problem was that no one knew the exact time the bridegroom would arrive. “At midnight there was a cry made, Behold, the bridegroom cometh; go ye out to meet him.” Five of the young women were caught unprepared, while the other five were ready. When the bridegroom came “they that were ready went in with him to the marriage: and the door was shut.” The unprepared tried to get in but could not. (Matthew 25:1-10). You are invited to this future feast “when the Bridegroom cometh.” “Let us be glad and rejoice, and give honour to him: for the marriage of the Lamb is come, and his wife hath made herself ready…. Blessed are they which are called unto the marriage supper of the Lamb” (Revelation 19:7-9).

After the resurrection, Peter and some of the other apostles went fishing. They felt alone. Even though Jesus, now gloriously resurrected, had appeared to them twice, nothing was the same since the trial and crucifixion. Then suddenly from the shore a man called, “Come and dine” (John 21:12). They knew it was the Lord. Peter ran through the water to Him. As he got close he saw that Jesus had prepared a hot meal for them. I love this illustration of Jesus the Christ providing emotional support and comfort food—bread and fish cooked over hot coals.

Jesus feeds us. He dines with us. He even cooks. His food fills bodies, hearts, and minds. He feeds us in our homes and wildernesses. He helps us earn a living to feed ourselves and our families. He commands that we be aware of others’ hunger and feed His children (lambs), His grownups (sheep), including “the poor, the maimed, the lame, the blind,” those who cannot “recompense” (Luke 14:12-13). He invites: “Come and dine.” “Feast upon that which perisheth not” (2 Nephi 9:51); “Feast upon the words of Christ” (2 Nephi 32:3); “Feast upon his love” (Jacob 3:2). “Yea… come unto me and ye shall partake of the fruit of the tree of life; yea, ye shall eat and drink of the bread and the waters of life freely” (Alma 5:34).

Oh, Marilynne, I just finished reading your beautiful, profound, and much needed article for everyone to read. Your chosen topic, your personal shared words, your chosen examples from holy writ have touched and penetrated my soul. The timing of your article during the season of feasting one with another is so timely. I, myself, feasted upon every word you wrote. The tears fell from my eyes and left streams running down my checks. I was truly fed in the quiet of my morning read. Thank you. (CP)