'The Savior is the head coach': How Navy's challenging football season brought Ken Niumatalolo closer to Christ than he's ever been | Meridian Magazine 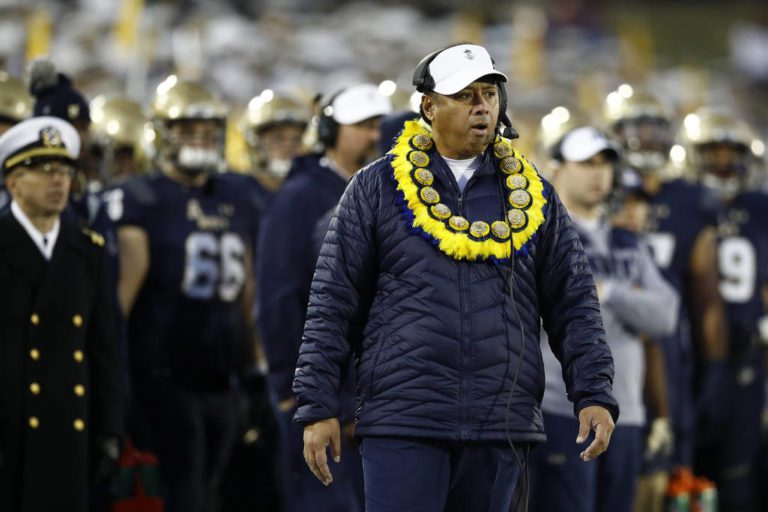 ‘The Savior is the head coach’: How Navy’s challenging football season brought Ken Niumatalolo closer to Christ than he’s ever been

As a seasoned, media-savvy leader of a D1 college football program, Ken Niumatalolo is deft at answering tough questions.

But a visiting General Authority’s soul-piercing query — posed last January in an Annapolis Maryland Stake Center office — left Navy’s head coach in tears: “Brother Niumatalolo, how is your relationship with the Savior?”

“I just started bawling,” he told the Church News, his voice cracking. “I remember telling (Elder Kevin S. Hamilton, a General Authority Seventy) that I’ve never been closer to the Savior.”

First, some context. Niumatalolo’s call that day to become the president of the Annapolis Maryland Stake occurred just weeks after Navy wrapped up a disappointing 2018 campaign. As the service academy’s all-time winningest football coach, Niumatalolo had grown accustomed to winning. He had led his team to bowl games, been welcomed to the White House, gleaned coaching honors and — most importantly to Navy fans — beat Army multiple times.

But the Midshipmen uncharacteristically dropped 10 games in 2018, including a season-ending loss to the Army Black Knights.

“The difficulty of the season caused me to get on my knees and ask the Lord, ‘What’s going on?’”