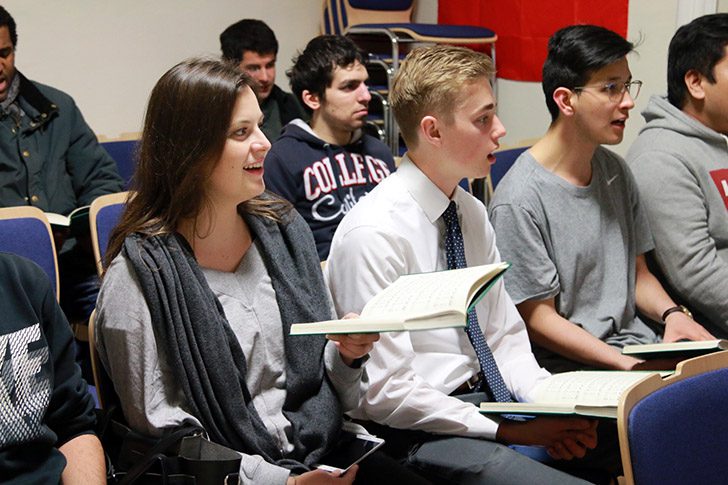 The Rising Generation in Rome

Meridian was live in Rome for the temple dedication. You can find all of our coverage at latterdaysaintmag.com/Rome.

Some of the photographs following are by Michaela Proctor Hutchins.

It is a Thursday night in Rome, and only a 15 minute walk from the iconic Trevi Fountain is a building on a busy street with a modest sign that reads “LDS Institute.”  The institute is 1,200 square feet on the third floor of a building with several other occupants, but tonight many young Latter-day Saints are bounding up those stairs to join together.

Some will be taking a class, others just grabbing a chance to talk to each other, and of course, there will be dinner, provided by a busy senior missionary couple. A smell, something akin to Sloppy Joes, fills the air. “This is my home away from home,” one young man grins and explains. It is the place he comes several times a week to find friends and a respite from the world.

How is the rising generation of Church members faring in this world that is becoming devastatingly more difficult? The values which we took for granted as the bedrock of life not that long ago have been abandoned in our society. That is one of the questions we hoped to explore when we came to the Rome Temple dedication. How are the YSA’s of the Church doing in Rome and across Europe?

We care about this because in other denominations, young people are dropping out, and if you walk into many churches in Europe on Sundays, the congregants are few and gray-haired.

That’s why this busy Institute filled with these singles is such a hopeful sight. It is the young who marry and form families and raise another generation. It is tomorrow’s strength in the Church.

For the last seven years Ugo Perego has been serving in Rome as the Institute director. With a PhD in human genetics, he has been busy in his own field, doing important research on DNA. His studies have been particularly intriguing on DNA and the Book of Mormon and Joseph Smith’s DNA. Yet seven years ago when he was offered this job, he and his wife, Jenna, who were living in the United States at the time, prayed and fasted about it and felt they needed to come to Rome.

They were particularly excited about preparing the YSAs for the coming of the temple.  But it is not easy to gather them and Rome offers particular challenges. In a city of 3.5 million people, there have been only three Latter-day Saint church buildings, and Ugo’s own ward extends a two-hour drive beyond the city. The potential for the number of YSA’s is many times higher than are gathering, but distance, especially on public transportation, prohibits many from being able to come.

This Institute building is the only presence the Church has right downtown, though there has been some consideration for also offering Institute at the church on the temple grounds. Still enough young Latter-day Saints are finding each other here that they are already looking for a bigger place with twice as much square footage downtown.

That’s good news. In January and February, they saw five YSA baptisms and the faces at the Institute represent a gamut of ethnicities and nations. Rome is a cosmopolitan place that has opened its doors to many peoples and so is the Institute. YSAs come from the Philippines, eastern Europe, North America, South America, and, of course, Italy.

“We’re happy with the way the work is going,” said Ugo. “They come. They bring their friends. They stay for food. They like the environment. They just like to talk. They have classes. We prepare them for missions.” In addition to two classrooms, there are games, a family history center, books, and places to lounge.

They also offer computers and support for BYU-I’s Pathway program toward college graduation.  Italy has the largest number of Pathway students in all of Europe. “Education is very important to me, so we are trying to instill that desire in them.

“We tell our YSAs that they are not too busy for education. We say, ‘You have been given a gift, but now you have a responsibility. First of all, go to Institute, get a stronger testimony; learn what the Lord wants you to do. Learn what your personal mission is. Everyone is here for different things and different talents.”

The Institute is opened every weekday from one until nine, and they like to come. In addition, ever year they have a national YSA conference so those from all over Italy can gather. Ugo said, “Many fall in love at those conferences and we’ve seen several marriages. Two got married in September and are now having a baby. Another couple got married and she became the stake Young Women’s president and he the stake Young Men’s president, so there is strength there.

“I like to think of the Institute as a school of the prophets or a leadership factory. We get them there. We teach them the gospel and we teach them how to serve. This isn’t just a social event, but we try to give them many opportunities to volunteer.”

Ugo said, “We have worked to make sure the temple becomes a priority for them. The last few months, they needed extra help to do some gardening, cleaning and moving some things around. I organized a lot of YSA groups to go to the temple. They were excited because it was still off limits while things were being finished, and they got a pass to go in and see some buildings and places before anybody else did. During the open house, too, they needed lots of help. Now the YSAs feel a sense of ownership of the temple, because they planted flowers. It is their temple.

“Now that the temple is open, we are going to have regular recurring nights for the YSAs, maybe as often as once a week or twice a month. We will call ahead and have a sealer to give them a certain time and hour just for the YSAs. That way they can experience sealings before they get married.”

Around the corner from the Institute is a church called St. Paul’s Within the Walls. Working with several local NGO’s, LDS Charities came in and developed an afternoon program every weekday to help refugees. The YSAs have been involved in that, teaching classes, bringing food, being in a gospel choir class.

Ugo said, “This new generation is different. Unlike earlier generations, they are less likely to accept things on authority. So, we give them opportunities to feel the Spirit and to be involved and make commitments. When we feed the refugees, we never spend a penny for that food. The YSAs want to do it.  We need to not only ‘Preach My Gospel’ but ‘live my gospel.’ The YSAs are happiest when they forget themselves and go to work.”

On 4 Feb, President Russell M. Nelson issued a personal invitation to participate in seminary and Institute:

He said: “On a personal note, I’ll confess that I like to figure out formulas. I like to figure out key elements of a situation and how to combine them to guarantee success. For example, when I was a young heart surgeon, I learned that one could temporarily stop the human heart by changing the ratio of sodium to potassium in the blood nourishing the heart. Then to start the heart again, we simply restored that sodium/potassium ratio to normal. It works every time. It is one of those many divine laws that doctors learn to obey.

“Well, here’s a formula for your life that will work every time. It is this: The closer you come to your Heavenly Father and to Jesus Christ by obeying Their commandments and by keeping covenants you have made with Them, the happier you will be.

“What, then, will help you become such a devout disciple of Jesus Christ? One answer is seminary and institute—not just attending but actively participating in class and faithfully following through with any assignments given.”

I noticed some nice sets of books for those young people to enjoy. They once were not more than a few feet from where I am typing.

Thank you for this article and great pictures. Ugo was our tour guide while in Rome for the Temple Open House just a few weeks ago. He is a very competent and knowledgeable person, and made our experience wonderful!