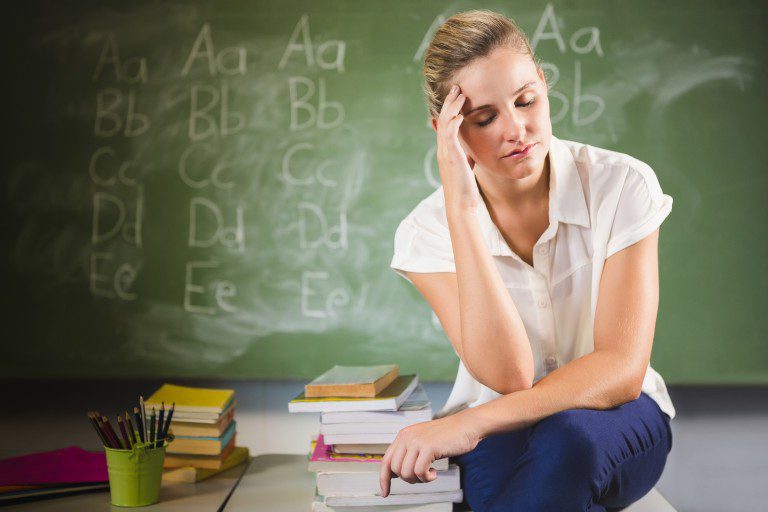 United Families International : Dedicated to informing you about the issues and forces impacting the family.

This is the second in a series of excerpts from Standing Up to Goliath by Rebecca Friedrichs.

I used to tell people that teaching is the most fulfilling profession in the world, and it was. But thanks to union domination of our schools and their influence on local, state and national elections, my precious profession is no longer attractive to many highly gifted teachers, and those who try to remedy the situation are often punished for their efforts.

Kelly, a special education high school teacher in Maryland, was always supportive of her union. She served as the building representative for ten years in her local association—including two years as the treasurer and two years as the president. Though Kelly honestly thought her union was there to support the needs of teachers, her eyes were opened when she became a union official.

When Kelly served as treasurer she said she wrote checks to the state teachers’ union (Maryland State Education Association – MSEA) for 30,000 dollars a month. She told me MSEA received 50% of teacher dues, the National Education Association (NEA) received about 30% of the dues, and her local association (teacher led and mostly appreciated) received less than 20% of teacher dues money. When speaking of the state and national teachers’ unions, Kelly told me, “It’s disturbing. They got about 500,000 dollars a year from us and did nothing for us.”

The problems for Kelly and her colleagues grew from a total lack of services and representation from the state and national unions. When serving as president of her local [association], Kelly received constant complaints from local members. She told me, “They were all dissatisfied with representation, especially in [teacher] disciplinary matters.”

Local teachers serving within the union work with state level “UniServ” directors whenever we have a grievance or an issue to discuss with our school districts. UniServ directors are supposed to be liaisons that are paid to support teachers with local level issues, but many of us have experienced these UniServ folks as roadblocks to real solutions and honest discussions with administration. The teachers in Kelly’s district were no exception. Kelly told me, “Our UniServ director was so bad, he would not show up for meetings or represent the needs of members. I’ve also watched good teachers lose their jobs. I’ve seen some harassed, and the UniServ did nothing to help.”

When Kelly sent an email to the chief legal counsel of her state union asking for support and where she could direct complaints against the incompetent UniServ director, she received a shocking reply. “You need to refer them back to [UniServ director]. It is up to the member[s] to express their concerns; and [UniServ director] will decide how to proceed. We do not allow members to ‘shop’ for an opinion that they like.”

Kelly had a whole folder full of complaints from many members, so this reply put her and her fellow officers over the top. She told me, “It prompted us to have a meeting with MSEA officials to try to work out our concerns over the lack of good and proper services for our members.”

Well, as you might guess, the meeting with MSEA didn’t go very well. In fact, after Kelly met with the MSEA president, instead of addressing the incompetence of the UniServ director, the state union leadership sent Kelly and her colleagues a troubling letter. “They gave us a list of demands and said if we didn’t comply, they would take us over.”

Kelly told me the entire situation was twisted into ineffectiveness and insubordination of Kelly and the members in her local association. She shared, “The letter stated that we were now under a ‘work plan.’ We were scolded for not raising enough money in PAC funds in support of union politics. The letter had nothing to do with their total lack of representation—it had everything to do with funding union politics.”

Kelly was flabbergasted, so she replied with, “I’m not stupid. You play off the ignorance of all of the people in Maryland who think you’re this wonderful organization that goes to bat for people.”

Indeed, not only are the citizens ignorant of union operations, but the teachers themselves are in the dark too. During this time while Kelly was president, the teachers’ unions were considering which candidate they wanted to support for governor of Maryland. Kelly told me as union officials they were “allowed” to vote for the candidate they thought the union should support, but they were only permitted to choose from a pool of Democrats. Kelly is a Democrat, but she wanted to choose the Republican. “He had a better record,” she told me. “But I was not allowed.”

Another thing that really bothered Kelly was the way the unions had only union officers choose the favored candidate without input from the rank and file. Officer votes were manipulated too because instead of offering private ballots, officers were told to stand in the corner of the candidate they wanted to support. “We were put under all of this intimidation to choose certain candidates,” Kelly told me. “I didn’t want any of them. There was lots of peer pressure. It’s not a democratic process at all.”

Because of the intimidation and one-sided politics, activist teachers who represent the unions’ minority viewpoint dominate the leadership and call the shots.

State and national union leaders harass independent minded teachers all the time, so that’s why most teachers just go along to get along, and that’s why so many Americans believe that teachers as a group agree with union politics. The fact is, like any other institution in America, teachers come from all political categories. Indeed, as the NEA’s own internal studies reveal, teacher union members actually skew slightly conservative.

Yet despite this, the majority of union money, human resources, power, and influence are directed toward far-left candidates, policies, and politics. In fact, the state and national teachers’ unions are involved with organizing the many divisive protests all across our country. They march to “Abolish ICE,” lobby and protest in favor of Sanctuary Cities, and they inspired and organized the “March for our Lives” movement in which children all over the country abandoned learning to march against guns whether their parents agreed or not. State and national teachers’ unions use hundreds of millions of teacher’s dollars to support the efforts of The Women’s March, Black Lives Matter, to defeat school choice efforts, and to lead the angry attacks on our president, Secretary of Education, and many other conservative leaders too.

State and national teachers’ union leaders are marching, shouting, attacking, and politicking as “representatives” of America’s teachers, yet most teachers have no idea we’re funding the divisive agenda. When teachers discover the truth and dare to ask for union accountability and transparency, we’re bullied severely, and we’re isolated and silenced for daring to question state and national union leadership.

This is a free country, so as private citizens, union leaders have every right to support whoever they wish and to march for whatever causes they champion – on their own time and their own dime. However, they do not have the right to push their social, sexual and political agenda off the backs of teachers, behind our backs and against our wills, while bullying us into submission.

Precious teachers have been abused and used by union leaders for fifty years, and we’ve been voiceless too. Thanks to the courage of dozens more teachers like Kelly who allow me to share their testimonies of union abuse in my new book, Standing Up to Goliath, we can all learn the truth about how state and national “teachers unions” have been grossly abusing and misrepresenting the teaching profession for decades while bringing great harm to the children teachers desire to educate, serve, and protect.

Let’s stand up for great teachers against the real Goliath bullies in America’s schools and culture – state and national teachers’ unions. Adopt all the teachers you know and give them Standing Up to Goliath today, so they can learn the truth about state and national teachers’ unions. Once we embrace, educate, encourage and empower great teachers to reject those Goliath bullies, we can all work together to restore Judeo-Christian values, parental authority, and teacher autonomy in our schools and culture.

Standing Up to Goliath, available now at Amazon and Barnes and Noble.

Rebecca Friedrichs is the face of a national movement to restore the voices and authority of parents and teachers in America’s schools. As a twenty-eight-year public school teacher, she was forced to fund state and national teachers’ unions whose politics and divisive tactics degraded her profession, our schools, universities, and our national character. Standing Up to Goliath is Rebecca’s exposé of bully unions. Rebecca also founded For Kids and Country, a national movement of parents, teachers, students, faith leaders, and citizens uniting to restore our schools and culture. Rebecca lives in Southern California with her husband Charles, and their sons Kyle and Ben.

I am a teacher in western Maryland. My father was a teacher and my daughter is a teacher. I can say that the vast majority of teachers are hard working, dedicated and love their students. I can also say that many of them are underappreciated by both parents and local governments. They don't seem to appreciate the positive influence that teachers have in the lives of children. The best way teachers have of defending themselves and the work they do is by banding together to fight for adequate pay and benefits. Yes, I have seen association representatives who haven't done a good job. But I have also seen that most really fight for teachers and adequate resources for schools. One thing I have also noticed is that those who are quick to complain about teacher associations are also quick to accept the higher pay and better benefits the associations negotiated with local governments and school districts. Maybe we should have pay and benefit tiers - one for those who are willing to band together to fight for the pay and benefits teachers deserve and another for those who try to fight "the system" alone and are willing to be under payed and under appreciated.

Why hasn't any one done something about teachers being bullied? I was forced out of the Clark county school district through beingbullied and lied about. They took EVERYTHING from me but my life and they wanted that too! NO ONE would go to court with me, I was told that NO ONE would ever win against the school district because of they are cronies ! I still get physically sick if I think of the abuse and horror I went through!!!!!!!!!!