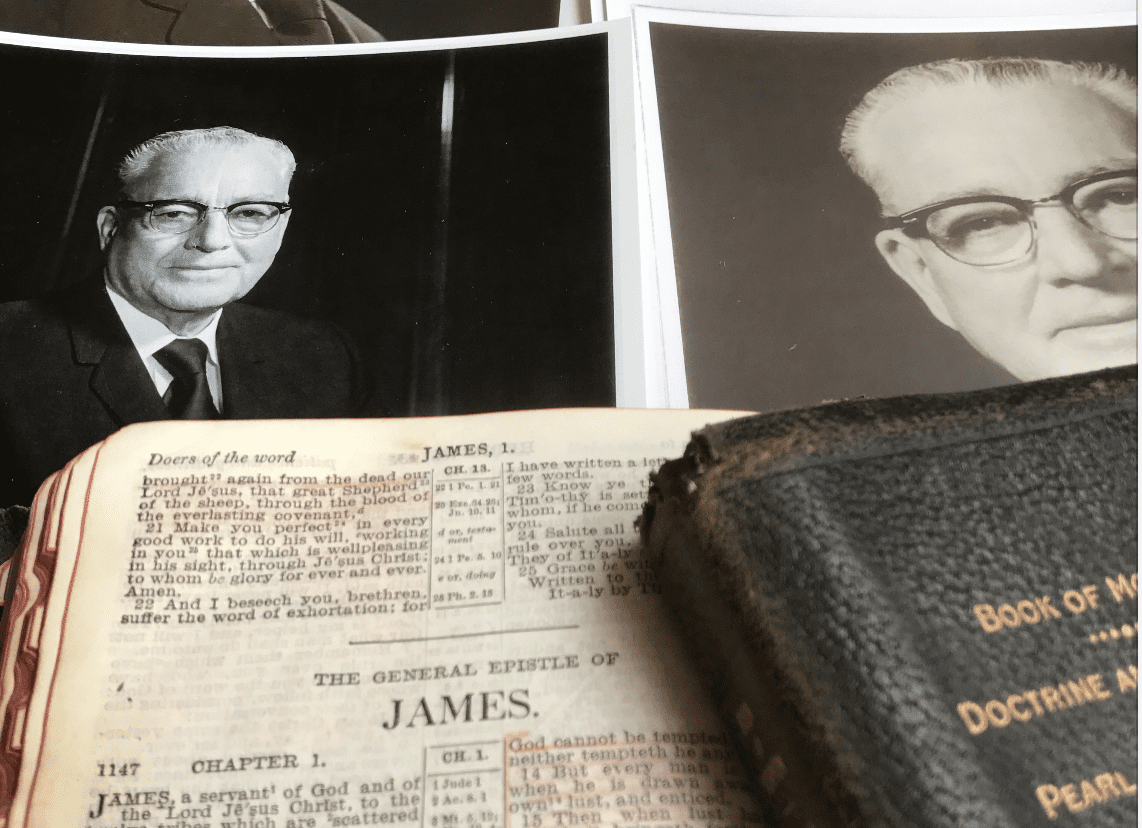 The Prophet’s Scriptures: Insights from Harold B. Lee’s Missionary Bible

Sign up for Meridian’s Free Newsletter, please CLICK HERE
Did you know that when Harold B. Lee was a missionary he marked 157 verses in the Book of Job?  Or, that while he was a missionary, he performed three marriages?  Neither did I, that is, until I was able to spend several hours going through his missionary Bible.
A few months ago I had the privilege of acquiring “The Harold B. Lee Library”.  No, not the one at Brigham Young University, rather the “personal” library of Harold B. Lee.  This “library” contained several scriptures that belonged to the prophet, including his missionary Bible.  These scriptures and books were acquired from his descendants with the understanding that I would share their inspiring story.  This article is in partial fulfillment of that promise.
Harold Bingham Lee was born in 1899 in Clifton, Idaho.  Twenty years later he was called on a mission to the Western States Mission, which was headquartered in Denver, Colorado.  Before he left on his mission, he was given a copy of the Holy Bible by a group of his friends from the   “Y. L. & Y. M. M. I. A.” in Clifton, Idaho.  This group of seventeen “Young Ladies and Young Men of the Mutual Improvement Association” gave “Harold Lee” a Bible to take with him on his mission.  All seventeen of his friends signed their names in the back of the book.
As you open the cover of his well-worn black leather Bible, which was printed in 1917, and included a “Ready References” section which was designed especially for missionaries, you immediately see the inscription which reads, “Remembrances of the Clifton Y. L. & Y. M. M. I. A. Nov. 7, 1920 to Harold Lee”.  Then, as you leaf through the next 1,347 pages, you will see where a young Elder Harold B. Lee, marked a total of 2,643 scriptures!
Rather than just mention that he marked 2,643 verses,  I think you will find it quite interesting to see not just how many, but also in which books he marked those scriptures.  Here is the breakdown:

After reviewing the above list, doesn’t it make you wonder which verses he marked in those books?  Well, that’s a story for another day.  I think it’s worth noting that he marked over 100 verses in eleven different books in the Bible:

Additional highlights from his scriptures include a section where he recorded the baptisms that he had during his mission.  At a time in the early 1920s when most missionaries were fortunate to have one or two baptisms, Elder Lee had 44 baptisms during his mission!  Of these 44 new converts, 35 were first introduced to the gospel by Elder Lee knocking on their door or by some other method of “first contact”.  There is also a section where he writes out the “Marriage Ceremony” and lists the names of the three couples for whom he performed their marriage ceremony.

Harold B. Lee’s love of the scriptures early in life provided him a firm foundation in the scriptures.  This served him well and helped prepare him for greater responsibilities.  Just nineteen years after his mission, he was called to be an apostle.   Forty-nine years later he became the 11th President of the Church of Jesus Christ of Latter-day Saints.  During that time he was known as a “scriptorian”.  In fact, in 1972, President Harold B. Lee and his wife Freda Joan Lee traveled through Europe and the Holy Land with Elder Gordon B. Hinckley and his wife Marjorie Pay Hinckley.  Sister Hinckley later recalled,

“It was interesting to see how President Lee moved into a situation. When we met with the missionaries, it was usually in the morning in a chapel filled with full-time and part-time local missionaries. As he stood to address them, he would seldom start with a word of greeting or preliminary remarks but would open the scriptures and begin a discourse. He moved through the scriptures with such ease that sometimes it was difficult to know when the words were his and when he was quoting. After one such meeting, I asked him how he had gone about memorizing the scriptures. … He thought for a moment and then said, ‘I don’t think I ever consciously memorized a scripture. I guess I have just worked them through so much that they have become a part of me and my vocabulary.'”

Hopefully this story can inspire all of us to improve our scripture study to the point that “We work through them [the scriptures]  so much that they become a part of us and our vocabulary“.
I will write my next article about the Book of Mormon, Doctrine and Covenants and Pearl of Great Price(triple combination) that Harold B. Lee acquired when he was called to be an apostle.
Reid N. Moon is the owner of Moon’s Rare Books in Provo, Utah.
2 Comments | Post or read comments

As a young missionary in 1969 I had the blessing of witnessing Harold B. Lee's mastery of the scriptures in the assembly room of the Salt Lake Temple. He spoke to the missionaries who spent the first week of their missionary training in Salt Lake at the old missionary training center close to temple square. President Lee spoke briefly about missionary work and the temple and then he opened it up to questions from the missionaries and he told us that since we were in the temple that no question about the temple would be off limits. We all thought that this would be the opportunity to learn about some of the mysteries of the gospel and especially about the temple.The questions starting comeing slowing but then speeded up as these new missionaries gained courage to raise their hand and ask questions about things that they had wondered about but were always afraid to ask.As I recall every single question was answered by President Lee stating that the answer was in the 4 standard scriptures of the church. He then would quickly cite a scripture reference and then turn to that scripture and give the answer to the question that was asked. I marveled then at how well he knew the scriptures. He never hesitated or stumbled about recalling the chapter and verse that held the answer to the question. It was very clearly demonstrated that he knew the scriptures extremely well and understood their meaning. I will never forget that sacred experience of having an apostle of God expounding the scriptures to a group of new missionaries as they were preparing to go out and preach the gospel.

We have a special interest in the notes President Lee made in his missionary scriptures. My husband's mother (Katherine Sims Hein) and grandmother joined the church in 1917 in Lafayette, Colorado. When the grandmother, Elisabeth McNeill Sims, died in April of 1922 in Lafayette, Elder Lee was at their home as a missionary for the funeral services. We were wondering if any notation was made about this event in his writings.The Hein family always felt close to Elder Lee because of his caring comfort at the time of the funeral. Through the years, each of the four Hein sons were married by Elder Lee in the Salt Lake Temple.