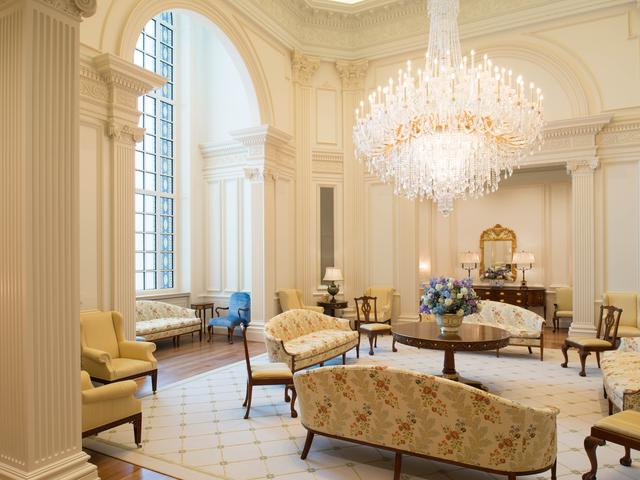 Journalist Thom Nickels blogged in The Huffington Post about his experience touring the new Philadelphia Temple.

The New York World’s Fair, in fact, was a pivotal moment for the Mormon Church. “…The huge leap forward initiated by the Mormon Pavilion must be considered a seminal event in the evolution of the Church’s use of media in spreading the gospel message to the world,” writes Brent L. Top, dean of religious education at Brigham Young University. “From that time to the present day, the Church’s outreach through its use of technology and media has increased steadily and exponentially.”

This fact was clearly in evidence during the Philadelphia Temple’s first media tour.

The press group of about 22 people included print and broadcast media. A Fox News reporter was there along with her camera crew. There were other unidentified camera crews and a number of photographers although no pictures were permitted inside the temple itself since it is considered the House of the Lord. The press met in the less than inspiring Robert A.M. Stern-designed Meeting House, the place for Mormon Sunday worship, since the Temple is reserved for marriages (and the “sealing” of those marriages for eternity) and for the baptism of the deceased. The tour was to last 2 hours with light refreshments at the end…

Our Philadelphia Temple tour guide was the Harvard educated Larry Y. Wilson, who serves as Executive Director of the Temple Department in Salt Lake City.

The silver haired Wilson had a sleek ‘Father Knows Best’ demeanor. He took us from the Meeting House to the Temple entrance where coverings were put over our shoes. The shoe coverings were to keep street dirt off the meticulously clean Temple floors and rugs.

Inside the Temple, Wilson described the furnishings and the commissioned art on the walls, including several original murals. He also explained how the Temple’s features were aligned to fit a southeastern Pennsylvania and Philadelphia theme, right down to the temple’s main door and frame with its bas-relief mountain laurel “Pennsylvania” blossom design. “We believe that the founding of this country was divinely inspired,” he said.

The interior of the temple is an extravaganza of quality craftsmanship. Nowhere will you find flimsy/cheap construction materials that you see in new construction all over town. There are no thin walls or doors that weigh a few ounces. One astonished journalist asked how the temple was able to ward off the sound of outside traffic. Wilson replied, “With very thick walls.”

Very think walls indeed! I bet they're triple layer dry wall like the Draper Temple. And I also bet all the door casings and other woodwork are spline and tenoned in place so there are no nail holes like there are in the Bountiful Temple