The Oft-Forgotten Legacy of the Pilgrims | Meridian Magazine 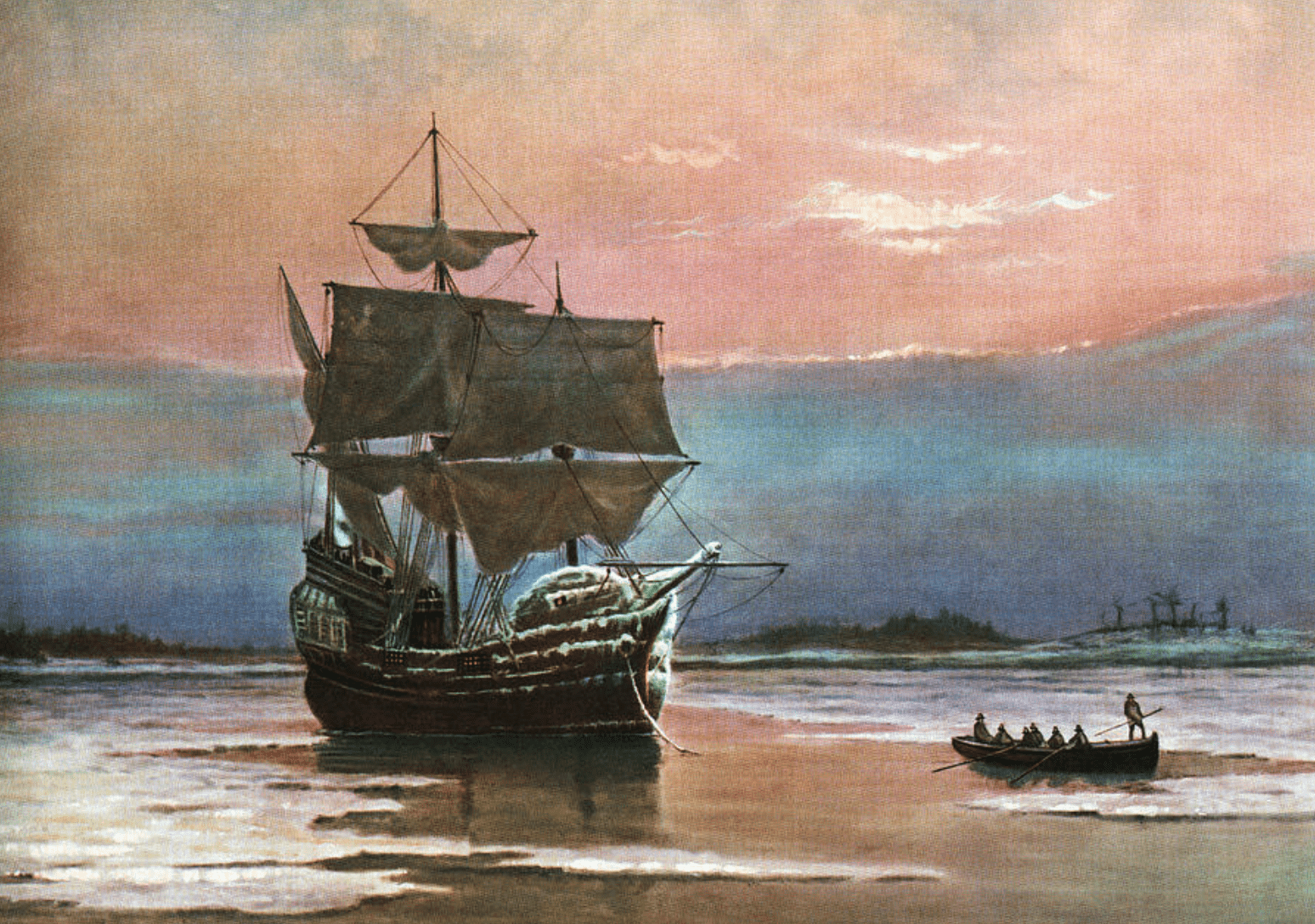 The Oft-Forgotten Legacy of the Pilgrims

Cover image: Painting Of The Ship The Mayflower 1620 In Plymouth Harbor By William Halsall.

Who knew that celebrating pilgrims would become political? Yet, even a website sponsored for their descendants, while it celebrates the pilgrims, excludes the most important motivation that drove them. It reads that their celebrations this year would emphasize “the values of migration, tolerance, freedom and democracy” and would tell the story of a ship and its passengers.

Something not just important, but vital is missing here. While these listed values clearly mattered to the pilgrims, it is to seriously rewrite or ignore history, to overlook the deepest reason that motivated them—their need to escape religious tyranny and desire to freely worship God as their consciences demanded.

Can we write religion out of history and pretend that it will honored and cherished in our society today?

That’s why Tim Ballard’s new book, The Pilgrim Hypothesis, cuts right to the heart of the ongoing debate about America’s roots and is particularly compelling to Latter-day Saints. He builds the case that though the pilgrims did not know specifically that they were of Ephraim, that they did think of themselves in covenantal terms and mentioned it freely and often.

They had already escaped from the religious tyranny in England and were living in relative safety and freedom in the Dutch town of Leiden. Yes, they regretted their children growing up without English culture, and yes some were worried about moral decay in the Dutch city, and yes, their work days were long and difficult in a place where there were fewer jobs. Yet, that does not explain alone, why they left Leiden.

Ballard notes that “these English separatists should not be thought of as exiles or second-class citizens in Holland. To the contrary, their congregation had grown to around 300, and their citizens were counted among the most respected citizens in town.”

Why leave? What were they thinking? “If they didn’t like Leiden, there were other places in the Dutch region where they could have migrated to establish themselves,” Ballard noted.

“And yet, because of Columbus’s work, they knew of this other option—this distant land called America. And that was where they went—to this wild, dangerous, untamed and unknown land, where Natives were known to kill European settlers. Why?

Ballard continued, “Certainly, whatever hardships they faced in Holland would pale in comparison to the hardships of starting over in America. It seemed an unnecessary and ridiculously risky move.”

What happened when the pilgrims arrived? Ballard said, “Once the Pilgrims got to America…they were attacked by Natives, they were starved out, and then one by one, they began to die. Within months they lost roughly half of their total number to disease and starvation.”

What’s more, the Mayflower was there in port until April 5, 1621, and Ballard notes, “the small band of remaining survivors, still sick, still dying, and now widowed and orphaned, could have returned. But they stayed.”

Why stay? Ballard says the lens of scripture and the gospel rounds out this question. Ballard said, “Nothing makes satisfactory sense unless and until we consider the gathering of Israel. Unless we consider the need for God to bring a pure-hearted, religious and covenant-minded people to begin the miraculous process of establishing a covenant land to host the restoration of God’s gospel and the temples on the earth. This was key.

Ballard noted, “The first settlers needed to be believers in God and His covenant upon the promised land of America. If not, the covenant wouldn’t take effect. The miracles born of the covenant, which miracles built the nation and brought us liberties found in the Constitution, wouldn’t take effect. And the gathering of Israel and the restoration of the gospel, which requires the liberty born of miracles, would be severely jeopardized. That’s how important the Pilgrims are.”

Tim Ballard said, “The Book of Mormon teaches us that “there shall none come into this land [America] save they shall be brought by the hand of the Lord” (2 Nephi 1:6). History seems to corroborate this scriptural promise. Like I said, this wasn’t a reactive move; it was totally proactive. It wasn’t something necessary for survival. Their existence or livelihood wasn’t being threatened in Holland as it had been in England. On the contrary, in many ways (as discussed above), they were doing just fine. Scripturally, the Pilgrims—if they were who we think they were—were called of God to come to this land.”

Before they left Leiden, they came together in a special service, and as one member said, “The Lord was solemnly sought in the congregation by fasting and prayer to direct us.”

Ballard noted that “By the time the service was over it was decided. The Lord had spoken. They would go to America. Pastor John Robinson drafted a letter stating the reason for the voyage. The principal reason he gave was that ‘we verily believe and trust the Lord is with us . . . and that He will graciously prosper our endeavors . . . [and] we are knit together in a body in a most strict and sacred bond and covenant of the Lord.’ Bradford added that their move to America was also inspired by their desire to spread the gospel of Jesus Christ to parts of the world that did not have it.”

Ballard said, “Knowing God was with them and knowing they were to take the gospel to all the world, they trusted in the protection of a covenant they made with each other and the Lord. Indeed, they were called. That was why they went. And that was why they stayed.”

He noted, “Lehi laid the same national-covenant foundation. Once he found the land of promise, before he or his people built temples, they too needed to build that protective foundation, that covenant on the land. “We have obtained a land of promise . . .” Lehi said, “a land which the Lord God hath covenanted with me . . . And if it so be “that they shall serve him according to the commandments which he hath given, it shall be a land of liberty unto them” (2 Nephi 1: 5, 7).

Ballard asked, “Did the Pilgrims follow the pattern? Just before they left, Pastor Robinson, who decided to stay in Holland to oversee those who could not make the voyage, led them in fasting and prayer. He then sent them off to America with profound instructions: ‘We are daily to renew our repentance with our God,” he stated, “especially for our sins known . . . [For] sin being taken away by earnest repentance, and the pardon thereof from the Lord . . . great shall be [your] security and peace.’ The national covenant was invoked.”

“But did the Pilgrims themselves say or do anything to corroborate this? Did they feel this connection to the ancient covenant and to the restoration of Israel? Before boarding the ship bound for America, they would have heard Pastor Robinson explain to them:

“Now as the people of God in old time, were called out of Babylon civil, the place of their bodily bondage; and were to come to Jerusalem, and there to build anew the Lord’s temple . . . so are the people of God now to go out of Babylon spiritual, to Jerusalem [America] . . . and to build up themselves as lively stones into a spiritual house, or temple for the Lord to dwell in…

“As Pilgrim historian Rebecca Frazier explained, “The [pilgrim] church believed they had a covenant like the Jewish people of old. Their comparison was the working of God’s will to save the chosen people in the Old Testament. They constantly looked to the Bible for guiding examples.”

Ballard continued, “Certain lands, bound by the covenant, would be part of the equation. When Abraham’s children went to these promised lands and invoked the covenant, miracles occurred and the people achieved great success. This is the power of a national covenant.

“The Pilgrims needed that same covenant to build this new nation under God because America always was one of the designated promised lands that fell under the Abrahamic covenant. They needed it, and because of that, they wanted the Lord to know what kind of nation they intended to be. When they got to the shore of America, they went so far as to imply that they themselves were the New Israel.

“They, and those who followed them into America, even named their villages and towns after biblical locales—Bethel, Bethlehem, and New Canaan, to name a few. More than a thousand New England towns were eventually named this way.

“They also regularly gave their children ancient Hebrew names from the first five books of the Old Testament. After the Mayflower anchored near Plymouth Rock, and as the Pilgrims were disembarking, William Bradford exclaimed, “Come, let us declare the word of God in [Zion.]” This mission to America, according to Bradford, was as important as that of “Moses and the Israelites when they went out of Egypt.” Indeed, these certainly seem to be the people of Nephi’s vision.”

“Speaking of the Pilgrims and those who followed them to the New World, historian Dr. Gabriel Sivan concluded: “They themselves were the children of Israel; America was their Promised Land; the Atlantic Ocean their Red Sea; the Kings of England were the Egyptian pharaohs; the American Indians their Canaanites . . . the pact of the Plymouth Rock was God’s holy Covenant . . . . [They] saw themselves as instruments of Divine Providence, a people chosen to build their new “commonwealth on the Covenant entered into at Mount Sinai.”

Ballard notes, “Clearly the Pilgrims sought the power of the ancient covenant, so they lived after the biblical model so God might honor their request and bless them.”

They set the tone for the nation that would be born on this promised land, and Tim Ballard reminds us why they are not to be forgotten or their underlying and immovable devotion to God minimized or forgotten. They are spoken of in the Book of Mormon, they are our spiritual forefathers, and as Latter-day Saints, we particularly understand the power of the covenant that drove them.

The story of the Pilgrims is being rewritten to be secular, as is much of US history.

The common perception of the Pilgrims being intolerant of other religions within their colony is true, but the story is more complex than that. They came to establish their own settlement where they could worship according to their specific beliefs and felt that people of different religious beliefs in their settlement would not only dilute their purpose, but also open the settlement up to contention, which they wanted to avoid as this had been part of the old world they were leaving. They didn't come to create a religious democracy. Their idea was that people of other religious convictions should establish their own settlement. I have thought of it as people creating a chess club and then other people join and want to change it into a checkers club.