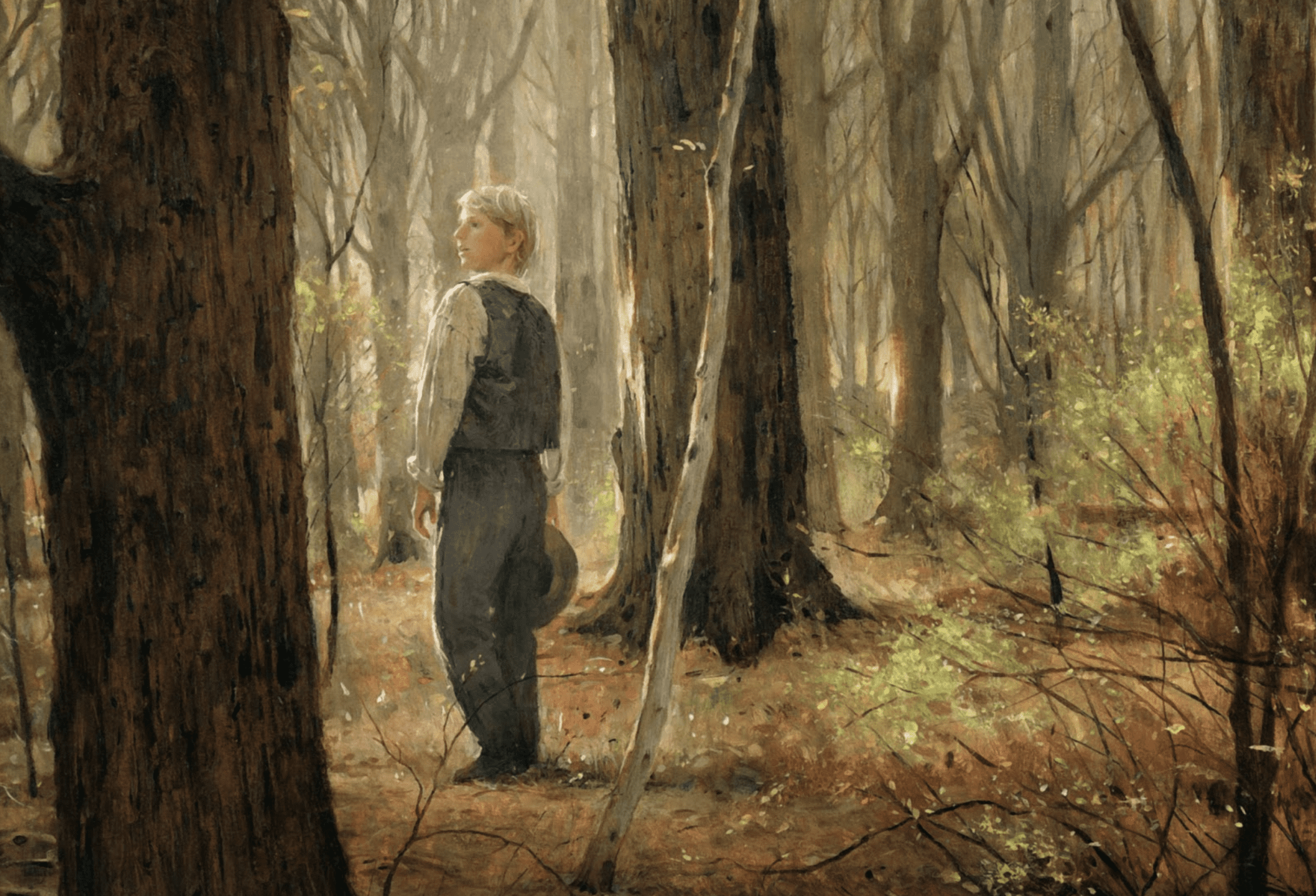 The Much More Personal 1832 Account of the First Vision

Spring 2020 is the 200th anniversary of the First Vision. The articles in this column look forward to the upcoming bicentennial celebrations of the events of the Restoration with great quotes, stories and interesting thoughts about the Prophet Joseph Smith. To read the previous article in this series, CLICK HERE.

We’re just a year away from commemorating the 200th anniversary of Joseph Smith’s First Vision. He was alone when he walked out into the woods near his family’s log cabin in Palmyra, New York. He was a very young man, but he was determined to find out which church he should join, and what he needed to do to obtain salvation. His humble prayer was answered in a most unexpected way. God the Eternal Father and His Son, Jesus Christ, appeared to him and called him to a prophetic ministry.

The first time the Prophet Joseph wrote of his First Vision experience was in 1832, while in Kirtland, Ohio. He would write or dictate his experience four times during his lifetime, but this first account is uniquely a personal one, highlighting the intimate experience he had speaking with God and the Savior face to face. Not only is this the earliest account of the First Vision, it is the only one of the four written in Joseph Smith’s own handwriting.

As Dr. Stephen C. Harper observed: “Each of the accounts has its own history. Each was created in circumstances that shaped what it says, how it was recorded, and how it was transmitted to us. Each has gaps and omissions, and each adds detail and richness. For example, Joseph describes a highly personalized experience in his earliest account (1832). Using revival language, he says he became ‘convicted of my sins, but could find no place for forgiveness since ‘there was no society or denomination that built upon the gospel of Jesus Christ as recorded in the New Testament.’ This account describes how the Lord appeared and filled Joseph ‘with the spirit of God,’ and ‘spake unto me saying Joseph my son thy sins are forgiven thee.’ It emphasizes the Atonement of Christ and the personal redemption it offered Joseph. He wrote that as a result of the vision, ‘my soul was filled with love and for many days I could rejoice with great Joy and the Lord was with me’” (“Suspicion or Trust: Reading the Accounts of Joseph Smith’s First Vision,” in No Weapon Shall Prosper: New Light on Sensitive Issues, Religious Studies Center, Brigham Young University and Deseret Book, 2011, 63–75).

Joseph also added that even though he rejoiced with “great joy and the Lord was with me,” to his dismay he could “find none that would believe the heavenly vision.”

We are so accustomed to reading and referring to the 1838 account of the First Vision found in the Pearl of Great Price—and rightly so, because it has been canonized as scripture (see Joseph Smith-History)—that most members have never read this earlier, much shorter and more personal, 1832 account. If you have not yet had that sweet experience, consider taking a few minutes to read and ponder this first version of the First Vision (included in its entirety below). It was never published, but was entered into what was known as Joseph’s Kirtland Letter Book—a notebook in which the Prophet Joseph indicated he desired “to communicate some things which…are laying great with weight upon my mind” (letter written in Kirtland, Ohio, to William W. Phelps, at Independence, Missouri, 27 Nov. 1832).

You can see the original six-page manuscript of this account in Joseph’s own beautiful handwriting, and read a verbatim line-by-line transcript in The Joseph Smith Papers at: https://www.josephsmithpapers.org/paper-summary/history-circa-summer-1832/1. (Easier to read transcripts are in Milton V. Backman, Joseph Smith’s First Vision: Confirming Evidences and Contemporary Accounts, 157; and at https://scottwoodward.org/firstvision_1832.html.)

Here is Joseph Smith’s 1832 account of his First Vision (with his original spelling preserved):

At about the age of twelve years my mind became seriously imprest with regard to the all importent concerns for the wellfare of my immortal Soul which led me to Searching the Scriptures believeing as I was taught, that they contained the word of God thus applying myself to them and my intimate acquaintance with those of differant denominations led me to marvel excedingly for I discovered that they did not adorn their profession by a holy walk and Godly conversation agreeable to what I found contained in that Sacred depository this was a grief to my Soul thus from the age of twelve years to fifteen I pondered many things in my heart concerning the sittuation of the world of mankind the contentions and divions the wickeness and abominations and the darkness which pervaded the minds of mankind my mind become excedingly distressed for I became convicted of my Sins and by Searching the Scriptures I found that mankind did not come unto the Lord but that they had apostatised from the true and liveing faith and there was no society or denomination that built upon the Gospel of Jesus Christ as recorded in the new testament and I felt to mourn for my own Sins and for the Sins of the world for I learned in the Scriptures that God was the same yesterday to day and forever that he was no respecter to persons for he was God for I looked upon the sun the glorious luminary of the earth and also the moon rolling in their magesty through the heavens and also the Stars Shining in their courses and the earth also upon which I stood and the beast of the field and the fowls of heaven and the fish of the waters and also man walking forth upon the face of the earth in magesty and in the Strength of beauty whose power and intiligence in governing the things which are so exceding great and marvilous even in the likeness of him who created them and when I considered upon these things my heart exclaimed well hath the wise man Said it is a fool that Saith in his heart there is no God my heart exclained all all these bear testimony and bespeak an omnipotent and omnipreasant power a being who makith Laws and decreeeth and bindeth all things in their bounds who filleth Eternity who was and is and will be fron all Eternity to Eternity and when I considered all these things and that that being Seeketh such to worship him as worship him in spirit and in truth therefore I cried unto the Lord for mercy for there was none else to whom I could go and obtain mercy and the Lord heard my cry in the wilderness and while in thee attitude of calling upon the Lord in the 16th [or 15th]* year of my age a pillar of fire light above the brightness of the Sun at noon day come down from above and rested upon me and I was filld with the Spirit of God and the Lord opened the heavens upon me and I Saw the Lord and he Spake unto me Saying Joseph my Son thy Sins are forgiven thee. go thy way walk in my Statutes and keep my commandments behold I am the Lord of glory I was crucifyed for the world that all those who believe on my name may have Eternal life behold the world lieth in sin at this time and none doeth good no not one they have turned asside from the Gospel and keep not my commandments they draw near to me with their lips while their hearts are far from me and mine anger is kindling against the inhabitants of the earth to visit them acording to this ungodliness and to bring to pass that which hath been spoken by the mouth of the prophets and Apostles behold and lo I come quickly as it written of me in the cloud clothed in the glory of my Father and my Soul was filled with love and for many days I could rejoice with great joy and the Lord was with me but could find none that would believe the hevenly vision nevertheless I pondered these things in my heart.

Nevertheless I fell into transgression and sinned in many things which brought wound upon my Soul and there were many things which transpired that cannot be writen and my Fathers family have suffered many persecutions and afflictions.

(*Although the age recorded in the manuscript appears to be 16, the “6” was not clearly written in the document and may have been written as a “5”. To read a more detailed historical description of this document, go here: https://www.josephsmithpapers.org/paper-summary/history-circa-summer-1832/1#historical-intro).

Alexander, per Joseph Smith - History, verse 19, the prophet Joseph records the Lord told him that “all their CREEDS were an abomination...” The Lord did not condemn the body of humble believers but the man-made creeds that led them astray.

Alexander, President Nelson did not meet with the Pope in order to join the Catholic Church. He went as the Lord's duly appointed representative and Prophet. The doctrines of the other churches are abominations to the Lord, because they are not pure. The people belonging to those churches, however, are precious children of our Heavenly Father, and we are to reach out to them in love, proclaiming the truth boldly, but respectfully. President Nelson is a master at that, and his example is to be emulated.