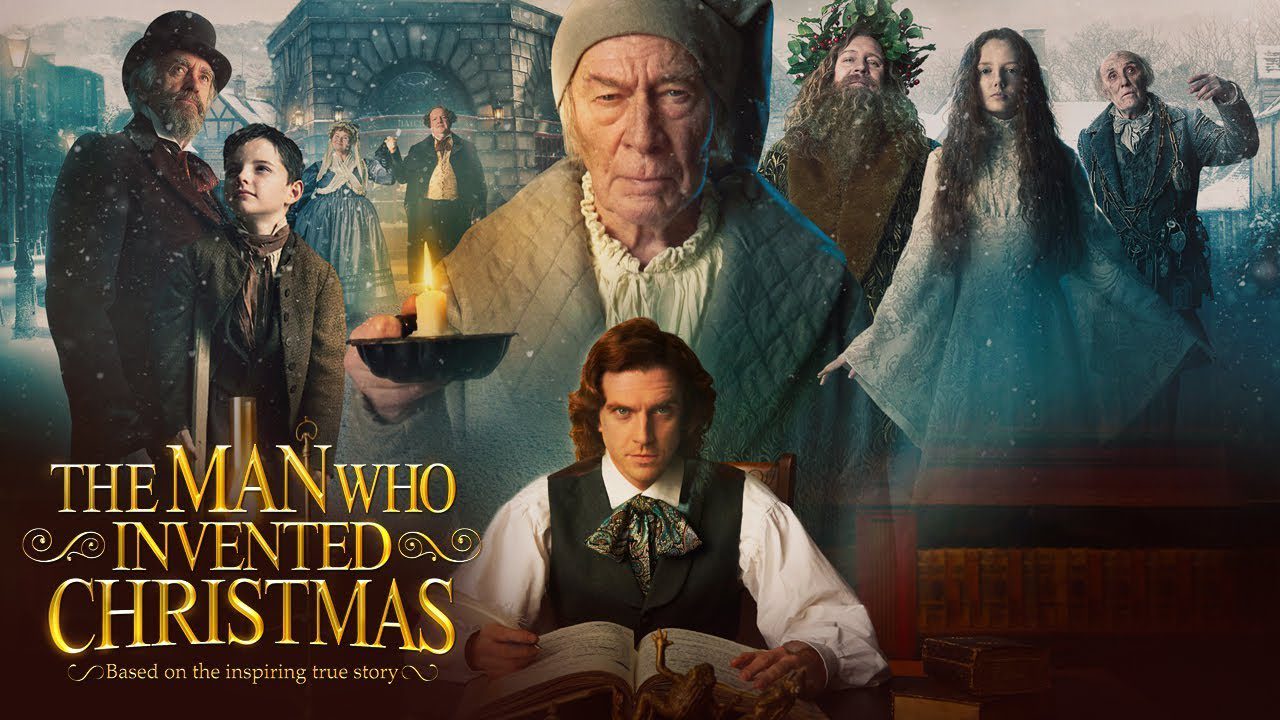 The Man Who Invented Christmas

In the somewhat dreary, tedious, violent run of movies this fall, I have been anticipating The Man Who Invented Christmas to come to the theaters, but I had no idea that it would be so much more than charming or delightful. This glimpse into Charles Dicken’s life during the six weeks he is writing The Christmas Carol is about my favorite theme and perhaps the most important subject of all. It is a story of redemption—not just for Scrooge, but for Dickens, too.

In 1842, Charles Dickens toured America where he was treated like a rock star with fawning audiences cheering him with rapt attention. His audience in England also afforded him unequaled popularity. Just 16 months later, however, after a series of what he considered to be three literary flops in a row, Dickens very much needed a success. He had been whipped by the critics. His bank account was overdrawn. Faced with the possibility of bankruptcy, he had considered giving up writing altogether.

“Debt is an ogre. If you are not careful, it can eat you up,” Dickens tells his wife.

It may be hard to imagine that the author who wrote some of literature’s most memorable lines could be in such straits, but the celebration of Christmas itself was also on the line. It had become a bit of a perfunctory, somewhat overlooked occasion. Some felt just like Scrooge himself, in these famous lines from the book: “If I could work my will, every idiot who goes about with ‘Merry Christmas’ on his lips, should be boiled with own pudding, and buried with a stake of holly through his heart.’

With six weeks before Christmas, Dickens hatched an idea to write a book about spirits that visit a miser during the night and presented it to his publishers, who doubted not only the topic but the time frame. Who can write a novella during that short time period, let alone get it illustrated, published and distributed to the public? When he decides, instead, to publish it himself, he is put in even a more desperate, creative position. He must succeed, but he was an author suffering from that worst affliction—writer’s block.

He was a man, as the trailer says, who couldn’t come up with a story until the story came to him.

The film, then is about the writing of the book complete with the compelling fantasy of characters who arrive suddenly on the scene to introduce themselves. “Get the name right, and if you are lucky, the character will appear,“ Dickens says, as juggles various names for his miser in the air. When he comes up with the name Scrooge, like magic, the character appears before him.

Dickens has only to look at Scrooge to begin the description. He is a “squeezing, wrenching, grasping, scraping clutching” man. So the story begins to come alive for him as he listens to what others say, takes note of original or interesting names, and observes moments in his family with a writer’s eye that will all become the creative mix from which he crafts his story.

Dickens actually wrote that he became so swept up in the emotion of his story that he “wept and laughed, and wept again” as he “walked about the streets of London fifteen or twenty miles many a night when all sober folks had gone to bed.”

Because the characters have minds of their own, they won’t do exactly what Dickens tells them. Because he is unable to move some of these characters who seem to have a life independent of his pen, he is thrust into understanding his own memories and shadows. It is this additional dimension that gives this movie so much meaning. Scrooge may at last be redeemed but so is Dickens who didn’t know he needed it.

Half magic, half biography the film portrays the mind of one of literature’s favorite authors. Writing is an extremely complex process of growth, creativity, and self-realization and through scenes that may feel at first merely fanciful, that process is exposed. So, it may not be strict in its historical accuracy, but it is certainly emotionally true.

The parts are masterfully played. Many have portrayed Scrooge over the years including Albert Finney, Michael Caine, the Muppets and Mickey Mouse, but none has done a more convincing job than Christopher Plummer, who at 87, finds a wry edge in this dour Scrooge. He is met in prowess by Dan Stevens (formerly of Downton Abby) who is the complex and sometimes manic Dickens who is on a road to self-awareness.

Through A Christmas Carol and in his other work, Dickens exposed England to the humanity and misery of the poor because Dickens had known it himself as a child. He said that in writing the book he hoped to “strike a sledgehammer blow” for the poor and reduced the price of the book to five shillings so it could be affordable.

This gives me an opportunity to plug the book by Les Standiford The Man Who Invented Christmas which was the source for this movie and demonstrates so plainly why Dickens had a heart for the miserable, the hungry and the smudged street urchin.

Standiford begins his book with this sad insight in Dicken’s family life, focusing on his father.

“In London, in 1824, it was the custom to treat a debtor little differently from a man who had reached into a purse and stolen a similar sum. In this case, he was a father of seven, and though he was gainfully employed, it was not gainful enough. His debt was to a baker, a man named Karr, who lived in Camden Street, and the sum was forty pounds, no small amount in those days, when an oyster was a penny, a whole salmon a pound and six, and a clerk who worked for a tightfisted miser in a countinghouse might not earn as much in a year.

“Accounts were tallied, the sheriff was consulted, and men were sent in consequence. Our father—John his name, and thirty-seven—was taken by the sheriff’s men to what was called a “sponging house,” a kind of purgatory where those who could not meet their obligations were afforded some few days to seek relief from their creditors charges, intervention from a person of influence, or possibly a loan from family or friends.

“In this instance, help was not forthcoming…’The sun has set on me, forever,’ he told his family as he left.’”

Left to help in this desperate situation was one 12-year old named Charles Dickens who went to work in one tumbledown factory-house on the River Thames, a dark and terrifying place where the rats skittered in the corners and crawled up the grimy stairs. This is where Charles Dickens the writer and chronicler of the plight of the poor was impacted with the eyes that would produce the literature that would substantially change the heart of England toward such ruthless conditions.

It is this Charles Dickens that took pen to paper to write A Christmas Carol. Below is a special clip from the movie as well as the trailer, which hints at the fun of watching a genius in creation, but does not spill the greater story at heart in this wonderful movie.

It will be a Christmas favorite at our house for years to come.

To everyone who has not read this book, I implore you to do so. Because it was written so long ago it is part of the public domain and if you have say an Ipad you can download it at no cost.. Several years ago the idea came to me to do this very thing and I have been reading it every year during the Christmas season. Take my word for it and get yourself a copy of this book which for me is surely inspired and bordering on scripture.

Quality cast. Looks like a good movie. Will be watching this one.