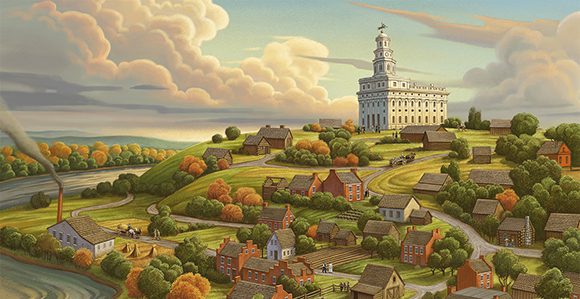 The Joseph Smith Papers: Recovering From Oppression in Early Nauvoo

The Latter-day Saints had endured outrageous oppression in Missouri, been driven from the state by order of its governor, been taken in as refugees by generous Illinoisans, and had reclaimed swampland to establish a new settlement on the bank of the Mississippi River.

Joining them after his recent five-month confinement in the jail at Liberty, Missouri, in the winter of 1839–40, the Prophet Joseph Smith named the settlement Nauvoo and looked ahead to making it “the greatest city in the world.”

It was time for a period of recovery, covered in the latest Joseph Smith Papers release, volume 7 in the Documents series, September 1839 to January 1841.

The new volume contains 129 documents—personal correspondence, discourses, minutes, a revelation, even a memorial to the United States Congress appealing for help in obtaining compensation for their losses.

Well known in Church history is the November 29, 1839, visit of Joseph Smith and Elias Higbee to U.S. President Martin Van Buren for that purpose and Van Buren’s reported response, “I can do nothing for you—if I do anything, I shall come in contact with the whole State of Missouri.”

Thus, over the years, the onus has been on Van Buren for the federal government’s refusal to help the Saints.

“It’s one of the general misconceptions, and it’s largely based on the readings of History of the Church out of context with the rest of the documents,” said Spencer W. McBride.