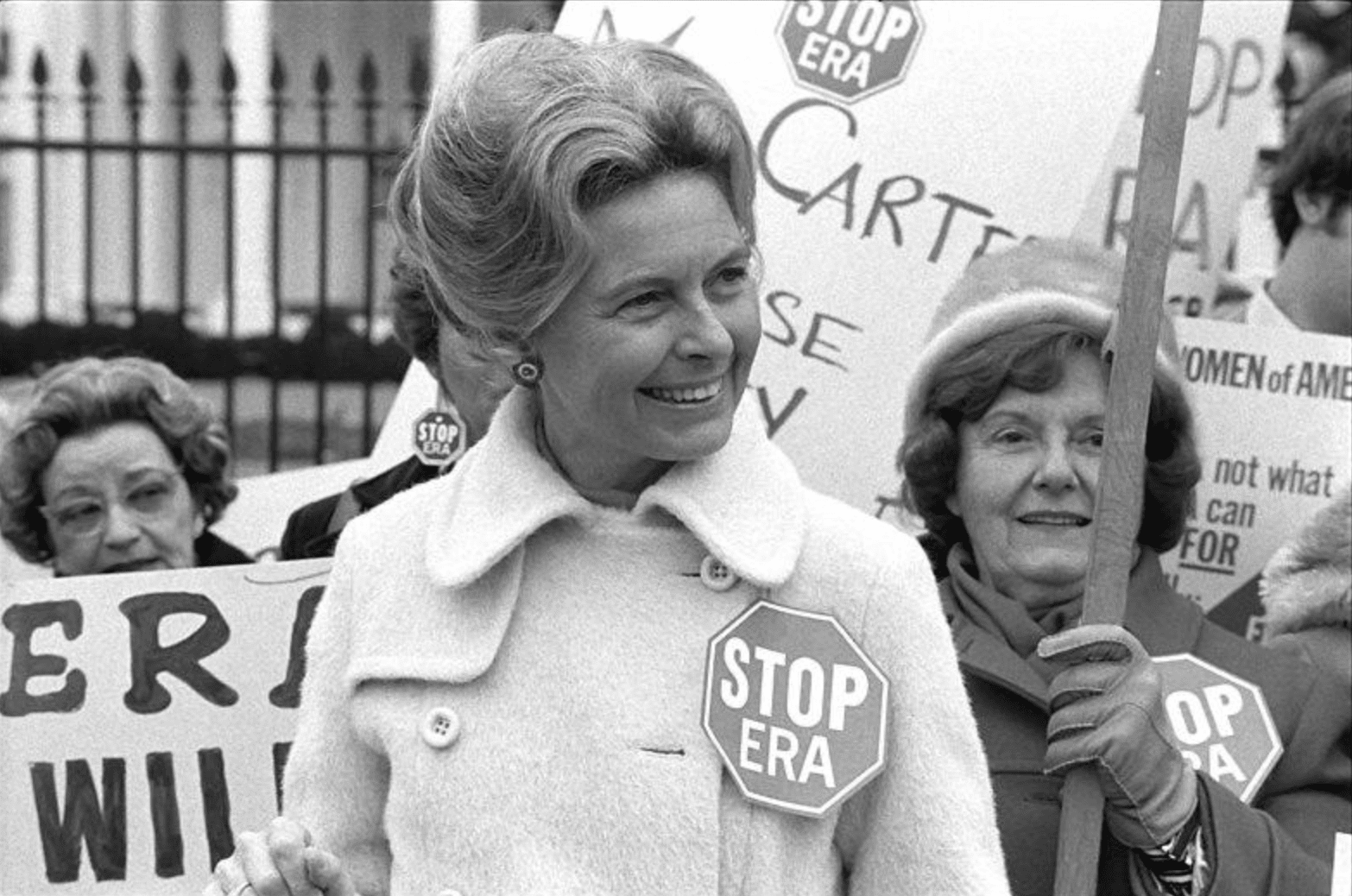 The Equal Rights Amendment: Still a Bad Idea for Women and Families

Cover image: Phyllis Schlafly demonstrates with other women against the Equal Rights Amendment in 1977 via Wikimedia Commons.

For many decades now, we have witnessed the progress of the movement for ‘equality’ between the sexes.  In fact, the debate has been going on for almost 100 years, starting with women’s suffrage back in the 1920’s.

A new momentum for the ERA?

Amending the Constitution is a two-step process …first it takes 2/3 of the House and 2/3 of the Senate to propose an amendment.  Then it must be brought to states for ratification with a 3/4 vote.  That would mean 38 states would need to accept it.

Many people do not realize that the ERA has come before Congress practically every year since the 1970’s.  It was given a seven-year deadline to acquire ratification back in 1972, then that was extended because it still was not ratified by the required 38 states, bringing us up to 1982 without ratification.  And while the efficacy of rescission is questionable, several states did rescind their original vote for ratification.

Without going into more of the history of the ERA, and its lack of ratification, it is important to note that we are getting close to the required number of state ratifications, so ERA activists are finding renewed momentum.

The negative impact of the ERA

I would like to suggest it is time, yet again, to get clear on just what long-term harmful impacts the ERA could have on the lives of women and the wellbeing of the family.  Here are just a few questions regarding the amendment we should consider:

1.  The current proposal is really not about equal pay, discrimination, and equal rights.  After all, those issues are addressed in our 14th Amendment. No, it is really about abortion, and any restriction on abortion amounting to some form of illegal sex discrimination. This quote taken from the National Organization for Women  (NOW) can give us insight into the purpose of those who continue to advocate the passage of the ERA:

“During the 1972 ERA ratification campaign, several prominent women’s leaders denied that an ERA would apply to abortion rights.  But a number of feminist legal scholars and influential leaders have urged that abortion rights be integrated with sex equality and the ERA.  As women’s access is limited by a further narrowing of abortion rights and perhaps an outright ban upheld by the conservative majority on the U.S. Supreme Court, the issue is all the more urgent.  Denial of access to reproductive health care is sex discrimination; women’s rights activists can help define it as such to enable a broader interpretation of the Equal Rights Amendment.

For many women, inequality is driven by two fundamental engines:  political control of women’s reproductive capacities and limited economic opportunities.  Denial of access to abortion is sex discrimination as it denies women – and only women – control over their reproductive lives which in turn affects women’s financial stability and affects important life decisions.  Denial of access to abortion care prevents women’s from maintaining bodily autonomy, without which there can be no sex equality.”

2.  The ERA proposal would transfer significant power to the federal government (that is currently held in States) for the regulation of things like marriage, property laws, divorce and alimony, child custody, adoptions, abortion, sex crimes, private/public schooling, prison regulations, insurance, and more.  Is that the outcome we really want?

Senator Orin Hatch commented on this transfer of power: “Under the Equal Rights Amendment…even the small amount of state authority remaining over abortion would probably be eliminated.  The absolutist mandate of the Amendment would likely transform any state restriction on abortion into an unconstitutional exercise in violation of the ‘equality of rights’ guarantee of the ERA.”

3.  The Equal Rights Amendment confuses equality with sameness and actually puts women and children at risk. Passage of the Equal Rights Amendment could prevent Congress and the states from passing special protective legislation that women may need because they are different than men.  If we have an amendment that requires ‘equality’ of rights under the law regardless of sex, there will be many needed protections not allowed nor granted.  This amendment would bar governments from adopting any laws that treat women differently from men or show any preferential treatment. Could the WIC program be considered “preferential treatment?”

4.  The ERA compels the government to draft women into the military in equal ratios to men, rather than maintain the current policy of voluntary service for women. Those in favor of the ERA will tell you the passage will not add any new laws to the Constitution, but merely prohibits sex discrimination. However, once passed, it may require the creation of new laws. U.S. Supreme Court Justice Ruth Bader Ginsburg, in her report titled Sex Bias in the U.S. Code, claims the ERA will affect at least 800 federal laws.

5.  If passed, the likelihood of mandated public funding of abortions increases as would requirements for religious-based institutions to provide services that compromise doctrine.  (For example, Catholic hospitals being required to perform gender reassignment surgeries.)

The ERA and the law of unintended consequences

The problem with blanket legislation is the unintended consequences for tomorrow. The ERA would remove all legal distinctions between sexes…a scary thought. ERA activists reject our concerns by telling us times have changed and that those who object to the Equal Rights Amendment are old fashioned. This is just a diversion tactic to distract us from using our voices.  The passage of the ERA does far greater harm to families, women, and society than it does good. We don’t need the ERA to address perceived disparities in the private sector and lack of paid parental leave. We do not want to legislate an equality between men and women that turns a blind eye to the very real differences between the sexes. Differences that deserve protection. Equality under the ERA would become a burden. While born with the same inalienable rights, men and women are different. That distinction should be preserved.

The Equal Rights Amendment has been rejected over and over again. It’s time to kick this piece of legislation to the curb once and for all.

I believe one of the reasons the proponents of the ERA have never been successful in its passage is that instead of uniting women, it divides them. Those pushing for the ERA were unable to gain the support of MANY women who recognize the dangers of this amendment. I am so grateful for Phyliss Schlafly's courage to speak out in the midst of so much opposition. Those who understand our true roles as women need to follow the example she left us.

Thank you for this article. I well remember the painful division in this country caused by the ERA and even division in the Church of Jesus Christ of Latter-day Saints when the prophet and other church leaders came out in opposition to this seriously flawed proposed legislation. We can never let our guard down.