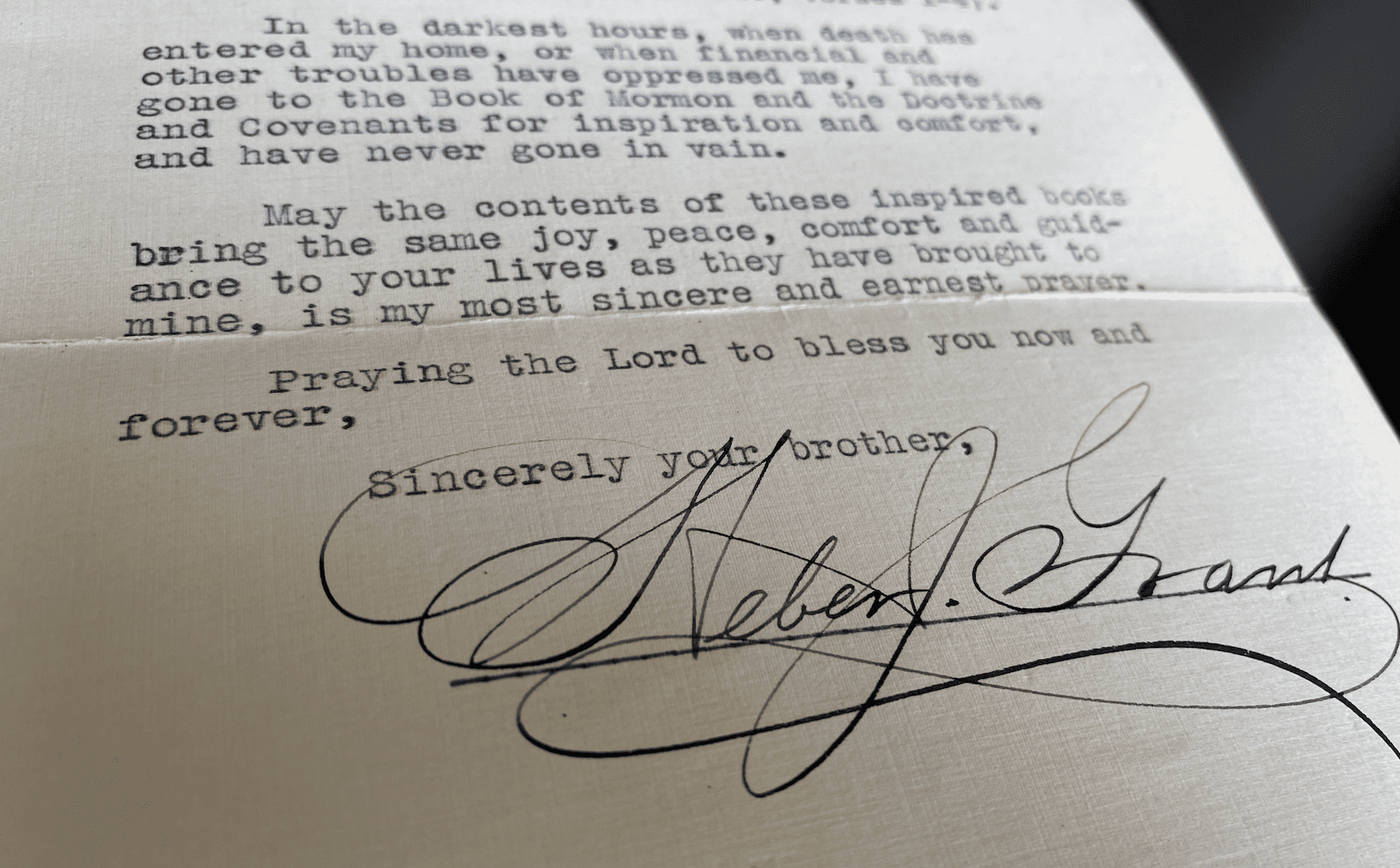 Last week I found myself at home with an unexpected amount of  free time on my hands.  I am amazed at how quickly my life went from “normal” to suddenly “closing my bookstore and staying at home with four school-aged children for an undetermined number of weeks“. With the world mired in a coronavirus pandemic, and not knowing how long this situation was going to last, I needed to do something productive.  So, I decided to tackle a long-put-off project of going through several boxes of books that had remained unpacked since our move to Utah almost five years ago.

I was soon rewarded with the discovery of a forgotten copy of Charles Dickens’ A Tale of Two Cities and a 1928 copy of  the Book of Mormon, Doctrine and Covenants and Pearl of Great Price which had a letter written by Heber J. Grant glued to the inside cover.

I was pleased to have found two forgotten treasures during this downtime at home.  Little did I know upon their discovery that both of these books would provide inspiration and guidance from the distant past.

I always enjoy reading the beginning of A Tale of Two Cities, so I picked up that book first and began to read:

Although it was written 161 years ago [1859], I’m not sure there is a more appropriate passage describing the world’s current situation.  We truly live in the “best of times“.  However, unfortunately for many in the world, these are “the worst of times“.

I put down my newly rediscovered copy of A Tale of Two Cities and picked up the set of scriptures.  I remembered finding this set many years ago, but I had never really read the letter–I just knew it was written by Heber J. Grant. As I unfolded the letter, I began to read its contents.  I soon realized that the message in the letter could just have easily been a messages that we hear at the next Conference.

Ninety-one years ago, on May 25, 1929, Heber J. Grant gave a set of scriptures to a young couple and enclosed this letter.  At the time, he had been the President of the Church of Jesus Christ of Latter-day Saints for a little over a decade.  And, just three short months after he would write this letter, the infamous stock market crash of 1929 would begin–and bring about the decade known as “The Great Depression”.

The letter written by Heber J. Grant reads as follows:

Accept this volume of sacred scripture with the love and blessing of Sister Grant and myself.

More than any other book I have loved the Doctrine and Covenants.  The words of our Heavenly Father and His Son Jesus Christ contained therein have been an inspiration to me from childhood.

As a boy of fifteen I read, carefully and prayerfully the Book of Mormon, and there came into my heart an abiding and firm testimony of its divine authenticity.  From that day to this its wonderful teachings have been a comfort, a blessing and a guide to me.

I thank God from the bottom of my heart that I read the life of Nephi in my youth.  I fell in love with him then, and his life has influenced mine for good more than that of any other character in ancient history, sacred or profane–save only the Redeemer of the world.

While the people of the world generally are in doubt regarding God and Jesus Christ, I thank the Lord today, and have done so, in days gone by, hundreds, yes thousands of times, that He and His Son have revealed themselves and spoken to men in our day. (Read Section 76, verses 20-24, also Section 110, verses 1-4).

In the darkest hours, when death has entered my home, or when financial and other troubles have oppressed me, I have gone to the Book of Mormon and the Doctrine and Covenants for inspiration and comfort, and have never gone in vain.

May the contents of these inspired books bring the same joy, peace, comfort and guidance to your lives as they have brought to mine, is my most sincere and earnest prayer.

Praying the Lord to bless you now and forever,

Reid N. Moon is the owner of Moon’s Rare Books in Provo, Utah.  He and his family are members of the Stonewood 3rd Ward in Orem, Utah.

And, just as an aside, look at that gorgeous signature!

Great inspiration from a man whom I admire immensely because of his love of rare books and his dedicated generosity to share with the public an insight into those books and memos. He doesn't keep them locked up in a dark cave; rather, he makes them available for those like me who stop by every chance we get while visiting our family in Orem. Thanks, thanks.