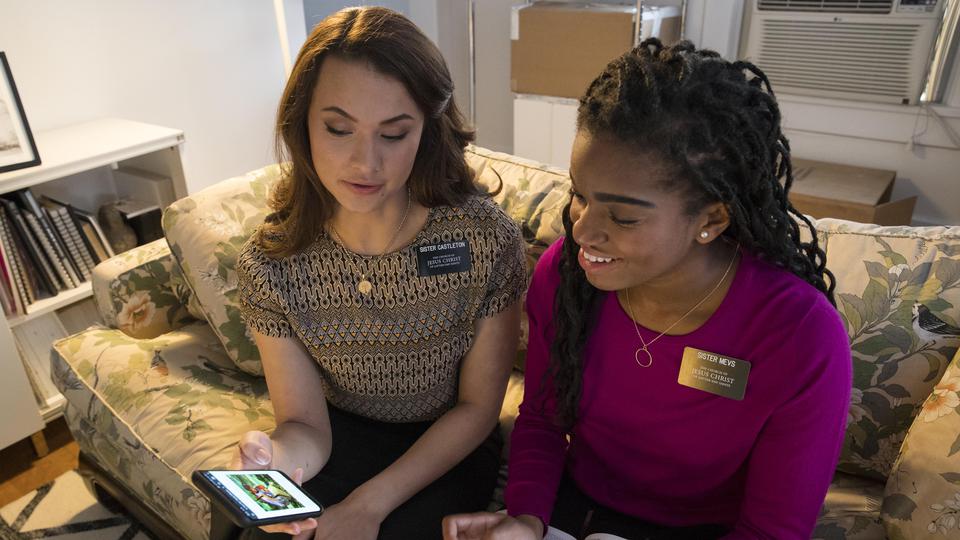 Last week, The First Presidency of The Church of Jesus Christ of Latter-day Saints announced an update to guidelines for communication between full time missionaries and their families. This change means that, “effective immediately, missionaries may communicate with their families on their weekly preparation day via text messages, online messaging, phone calls and video chat in addition to letters and emails.”

Opening the doors for this regular, and much more personal communication between missionaries and their families marks a stark contrast to the previous communication guidelines, which only allowed missionaries the chance to call home twice a year, on Christmas and Mother’s Day.

Though I didn’t personally serve a mission, I remember well the excitement that surrounded an anticipated call from one of my older siblings serving in lands far away. As part of a large family, the phone would be passed around as each child got a chance to hear the almost forgotten voice of the faithful missionary brother or sister whose pictures smiled back at us from the fridge each day.

Having such precious little contact with that beloved person added a feeling of consecration to the mission experience and a sort of magic to those few minutes that we could hear from our missionary directly. A part of me felt a little sad at the loss of that magic when I heard about the announced change, but I agree with blogger Jeremy Goff who said that, rather than dwell on whether he liked the idea, he “sought to understand why the Lord thought it was a good idea.”

A Blessing for Missionaries

Hearing the reflections from parents of current or recently returned missionaries helped me get a glimpse into the benefits we can anticipate from this new level of communication:

“When I sent my son Benjamin on a mission right out of high school, I felt like he had been ripped from my heart and then I threw him to the wolves. He was hurdled into a new culture, with people who were less than kind, doing things he had never done before. He would have benefited greatly by being allowed to express his concerns and questions to his most trusted supporters, Mom and Dad, whose experience and knowledge could tutor and mentor him, and in the moment, instead of emailing conversations back and forth with a week at a time in between!

This could also relieve some of the pressure placed on the Mission President to deal with every missionary’s concerns…all the time. Also, the missionary who has a Mission President from a different culture can sometimes feel misunderstood and difficulties can arise because of that. How wonderful to be able to counsel with your family who truly know you and can best tutor you. For those missionaries whose families are not supportive or inactive, maybe these missionaries could consult with an faithful extended family member or trusted Bishop or YM/YW’s leader. I also wonder about the kind of impact a missionary’s experiences could have on his less than active family, as he shares the miracles and blessings he is impacted by.” Bonnie McMillan, Alpine, Utah.

It never hurts to have more love and support in your corner, particularly from someone who understands your context the way only your family can. And Bonnie is not the only parent who expressed the desire to help ease some of the cultural division that can exist between missionaries and their mission presidents as they adjust to such a vastly different life than the one they were living before.

We feel that this new policy is divinely inspired. Our very self-confident daughter Taylor, just returned home from a mission in Argentina, where she had a companion that consistently tore her down until she eventually lost all of her confidence. She was in a very dark place. She could barely get out of bed. She was even considering coming home.

She tried to talk to her mission president but there was a communication barrier, since he was Spanish speaking and she was still learning the language. She really didn’t know who else to turn to.

Her weekly emails changed from being newsy, funny, and spiritually uplifting to depressed and almost non-existent. We knew she was struggling, but didn’t know what we could do to help her other than an encouraging weekly email.

After 12 incredibly difficult weeks, things eventually improved for her. It would have been such a blessing if we could have spoken with her on a more frequent basis to help her through this trial.

Discouragement of that kind is not uncommon to missionaries who are having such a unique and singular experience in a new place. Even President Gordon B. Hinckley wrote home from his mission to England and told his father “I’m not doing any good here. I am just wasting my time and your money. I don’t see any point in staying here.”

We all know his father’s response, which changed the young, would-be prophet’s life: “I have only one suggestion. Forget yourself and go to work.”

Missionaries will now have access to that kind of parental encouragement on a more intimate, regular basis and as one missionary mama pointed out, youth in the modern era are accustomed to such immediate communication that the contrast with a mission can be especially difficult:

“I think it’s more in line to what kids are used to as far as connecting to people. It’s really easy to connect to people through Skype, through Instagram, through text. Even our other kids, we see our grandbaby in Cedar City almost every day. In our day, I went to live in Arizona and I talked to my parents once a month. That was what was normal for us. Nowadays, for kids to go from what they are used to I think it is harder for some emotionally.” Angi McGrath, Alpine, Utah.

“When you look at my son Max, he barely writes us anyway, he won’t spend a ton of time talking to us. He has lots of things to do, but I think it will be a great thing for the emotional support of the missionaries.”

For some missionaries and their parents, I’m sure the idea of so much added support brings a sigh of relief. For others, like a friend of mine who said his mission was his first chance to truly do something completely on his own and that brought a life-changing feeling of self-assurance and independence, more contact may not be helpful or necessary.

Like so many of the latest changes in the ongoing Restoration of the gospel, this new policy can be personalized and catered to the needs of the individual.

A Blessing for the Rest of Us

I stand by the magic I have always felt during those brief, Christmas communications with my siblings as they served. But perhaps I was misinterpreting that spark to be related to how briefly we were able to talk and how fleeting and tender those communications were, when in reality the sweetness was something else entirely.

There are few things as transformative as seeing someone you love take on the mantle of missionary and dedicate their lives to the Lord in a way that makes the Spirit truly their constant companion. To see someone not long out of high school step into a greater version of themselves and to get to see the reality of the atonement reflected back in their eyes from the people they have helped through the process of coming to Jesus Christ–that is the true magic. The special nature of that communication doesn’t come from rarity, but from consecration, and I’m struck by the blessing a greater dose of that will be in the lives of the families of those that are serving.

I think perhaps we are focusing on the wrong thing if we think this change is only about providing greater emotional support to our missionaries. Though that certainly has the potential to be a great blessing, these new, more open lines of communication are a two-way street and the spirit of the work that will travel from the missionaries back their families has the potential to not only bless the lives of their family members, but to make sharing the gospel an active and ongoing dedication for all involved.

Again, I appreciated how blogger Jeremy Goff put it:

“Missionary Zeal is like lightning in a bottle…Imagine the missionaries sharing the miracles they are seeing and igniting the missionary fire with their family at home, whose families, in turn, start reaching out to those in their wards, welcoming the recent convert, reaching out to the less active, and inviting their non-member friends to learn more. And imagine the ability for missionaries to talk with their families about their investigator’s needs. To receive direct counsel from parents on how to help their investigators, it will also allow families to be more involved with their child’s missionary service. I see the day when families around the world, kneeling in family circles, will be praying for their children’s investigators by name and need. Thus united in faith, the work will be hastened.

How quickly we "adults" tend to forget the counsel found in Proverbs 3:5-6 to "Trust in the Lord ... and lean not unto thine own understanding." We all need to practice trusting the Lord in all things, whether we are missionaries, Bishops, or even helicopter parents. Perhaps this is a means of preparing us for times when trusting in Him is our only recourse.

Whenever I called home, as a missionary, it took me out of the "missionary mindset" and took me several days to get back into it. My mind wandered to home, people, places, etc. Will calling home on a weekly basis be too much of a distraction? Is this a response to the "snowflake" generation?