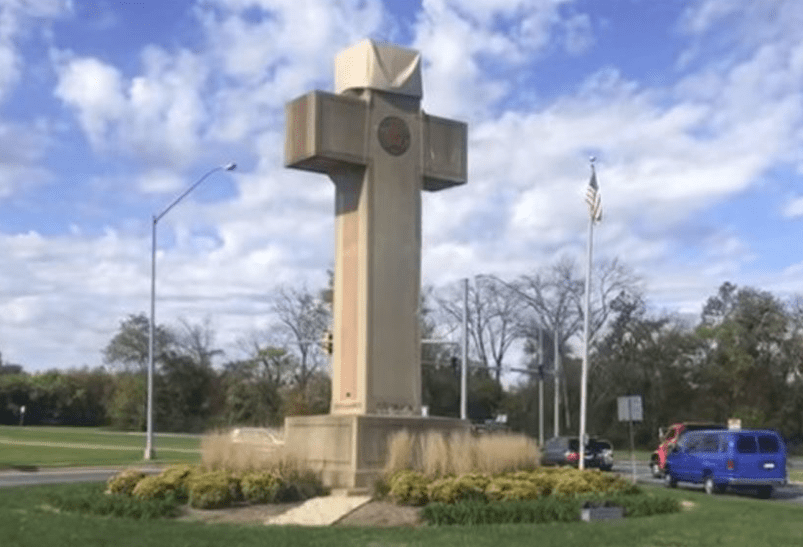 The American Legion and a Maryland planning commission are asking the U.S. Supreme Court to protect a cross-shaped World War I memorial, after the 4th U.S. Circuit Court of Appeals found the monument violates the Constitution.

Supporters of the petition say the 4th Circuit’s decision compromises war memorials across the country, including those at Arlington National Cemetery. Should the high court take the case, it would likely mark the new conservative majority’s first foray into the culture wars.

The American Legion erected a 40-foot tall memorial called the “Peace Cross” in Bladensburg, Maryland, in 1925. A plaque at the base of the monument lists the 49 war dead of Prince George’s County and a quotation from President Woodrow Wilson. The crux of the cross is emblazoned with the seal of the Legion, and the words “valor, endurance, courage, and devotion” appear on each face.

In the years that followed, other memorials to county veterans were raised in the Peace Cross’s vicinity. That collection of statuary has since been designated Veterans Memorial Park. The high court has permitted the use of sectarian imagery where it appears in collections of otherwise secular displays.

The Maryland-National Capital Park and Planning Commission has administered the Peace Cross since 1961, when it was acquired from the Legion.

Three Maryland residents represented by the American Humanist Association (AHA) sued the commission in 2014, arguing the monument runs afoul of the First Amendment’s ban on religious favoritism. The Legion intervened and entered the dispute as co-defendants.

Though a federal trial judge found for the commission, a three-judge panel of the 4th Circuit reversed, finding the Peace Cross effectively endorses Christianity.