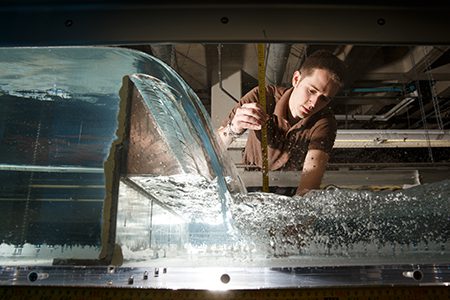 Five years ago this summer, a couple drowned in Utah’s Jordan River when their kayak capsized going over a small drop in the streambed near Murray. While the drop-off at that location creates a harmless-looking two-foot waterfall, the undercurrent is deadly.

Researchers in BYU’s Department of Civil and Environmental Engineering know this all too well. According to their research, small dams and other low-lying drop-offs like the one on the Jordan River have accounted for more than 440 deaths in the United States since the 1950s.

The reason, says professor Rollin Hotchkiss, is that these dams create a submerged hydraulic jump that pulls people back toward the dam and pins them with a strong upstream current. Sadly, the fatalities they’ve recorded with their new low-head dam database likely represent less than half of the actual deaths.

“People don’t understand the nature of the problem,” Hotchkiss said. “They misattribute deaths to the inability to swim, or physical condition, or poor equipment or no lifejacket. Actually, none of those things matter very much. It’s the current that will take out just about anybody in any kind of condition.”

Every week, Hotchkiss and his students receive the chilling news that another person has died at a low-head dam. They record the data in the database created by grad students Ed Kern and John Guymon, and add another pin to the interactive map of the country.

But the engineers are not just focused on cataloging the accidents. The primary goals are to raise public awareness and to educate decision makers so remediation efforts to improve the safety of the dams can move forward.

Those efforts, detailed in their article in the Journal of the American Water Resources Association, include posting signage, restricting access and perhaps most importantly, retrofitting dam structures to alter dangerous back-currents that can trap humans.

“Fixing the problem is really out of our control,” Hotchkiss said. “We really have no other recourse but to hope our message gets widely disseminated.”

In the wake of the deadly Jordan River incident, governments along the river have been spurred by the tragedy to address a number of dangerous drops between Utah Lake and the Great Salt Lake. This summer, crews will reconfigure the Jordan River accident site to make it a safe recreation point.

Hotchkiss and his students will continue their research by testing out the effectiveness of dam “flow deflectors.” These inexpensive footrest-looking structures would be added to dams to break up the uniformly dangerous current.

In the meantime, he hopes owners of low-head dams ask themselves whether or not they really need the dam. In his opinion, if such dams have outlived their useful life, they should be removed. If they’re still in use, he said, remediation should be considered.

“People should not go to sleep at night just hoping that a tragedy doesn’t occur, that nothing bad will happen,” Hotchkiss said. “They should be proactive about it. Because there are still thousands of these deadly dams in the country.”