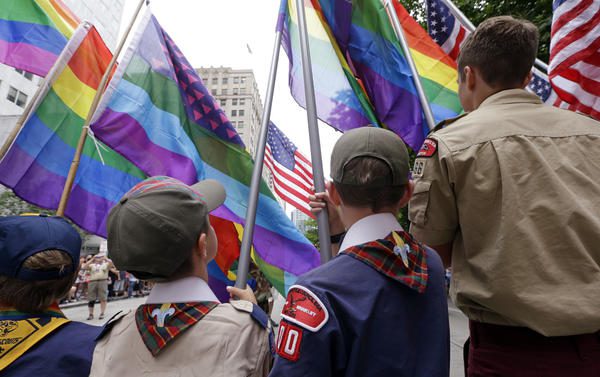 The Boy Scouts of America’s decision to drop its ban on gay adult leaders and employees brought a range of responses from religious groups.

On Monday, members of the BSA’s national executive board voted to drop the ban two years after the Scouting organization allowed gay youths, but not adults. The BSA said religious groups, which make up about 70 percent of its chartered organizations, may still choose adult volunteer leaders “whose beliefs are consistent with their own.”

Here’s a sampling of religious responses:

The Church of Jesus Christ of Latter-day Saints:

Church officials said they were “deeply troubled” by the decision and said their “century-long association with Scouting will need to be examined.”

The SBC has grown cooler to the BSA in the past few years. “We express consummate sadness that this once vibrant organization continues to cave to social pressure, compromising its long-held, constitutionally protected tenets,” said Roger “Sing” Oldham, spokesman for the SBC’s executive committee. Baptist churches are autonomous, so each church will decide for itself.

The National Catholic Committee on Scouting expressed concerns about how Scouts define “sexual orientation” and how the new policy will be put into practice, but still supports the organization. “While this fluctuating situation will be increasingly challenging, we recognize the vital importance of providing a Catholic emphasis to Catholic Scouts and Scouters seeking ways to live out their ‘duty to God,’” its leaders said.

To read other religions’ responses, including Reform Judaism and United Methodist, click here.

I agree with Karen. Let us not try to see how close our scouts can get to the fire before getting burned.

Adult leaders who happen to be gay will do NOTHING to endanger the values taught by Boy Scouts. If we believe in "federalism," surely there has to be room for particular troops to make this decision. The only reason I've ever hear for opposing gay scout leaders is the idea that they are likely to abuse or "recruit." Both fears are preposterous.