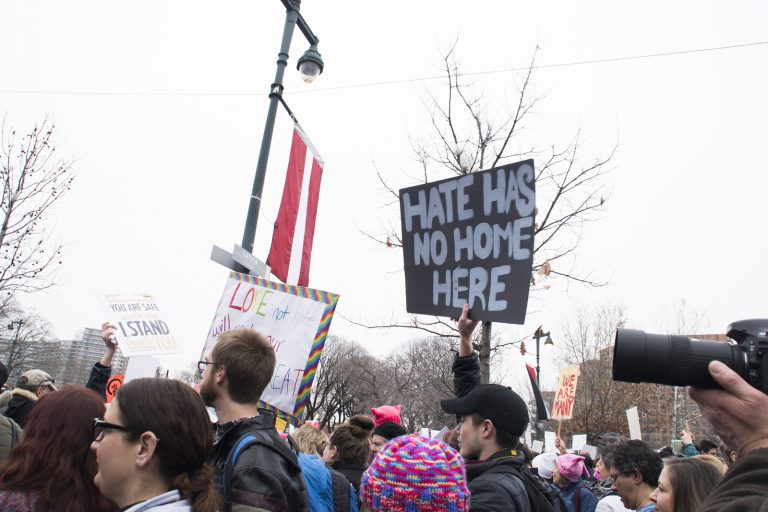 The following was written by the Catholic Archbishop of Philadelphia, Charles J. Chaput. Special thanks to Daniel C. Peterson for bringing it to our attention via his blog, Sic et Non.

A friend of mine lives in one of Philadelphia’s comfortable suburbs. She and her husband are both attorneys. Both hold Ivy League degrees. Their community is nearly 90 percent white, rich in Quaker history, above average in education and income, and low in crime. People are friendly. Nights are quiet. Streets are clean and safe. Real estate is well-groomed and priced accordingly. In other words, it’s a town better known for its merit class credentials than its angry bigots.

So she thought it odd when lawn signs recently started popping up in her neighborhood with the slogan “Hate Has No Home Here.” In her view, in her manicured corner of the woods, hate was already homeless, but apparently this was not so. How had it gone unnoticed?

With a little digging, she found that “Hate Has No Home Here” is a transplant. It’s part of a campaign begun by Chicago’s Hollywood-North Park Community Association and now spreading nationally. In the words of the campaign’s website, “The Hate Has No Home Here Project promotes just and inclusive communities by encouraging neighbors to declare their homes, schools, businesses, and places of worship to be safe places where everyone is welcome and valued.” Despite the coincidence of its founding in November 2016—the same month as Donald Trump’s election—the campaign is avowedly non-partisan and non-sectarian.

Again, from the website: the lawn signs are “a public declaration that hate speech and hateful actions against others will not be tolerated by the person or organization displaying the sign. In that, it is non-partisan.” The signs are a statement that, “while it is okay to disagree with others civilly regarding issues, it is not okay to intimidate or attack a person or group—verbally or physically—based on attributes such as gender, ethnic origin, religion, race, disability, political party, or sexual orientation.”

Feelings of this sort are obviously admirable, and the spirit behind the campaign is clearly sincere, which is why many good people support it. It was St. Paul, after all, who urged us to speak the truth with love. Truth without love is a hammer. We can easily abuse it to pound those we dislike. The feeling of righteousness is deliciously addictive, and all the more so when the hurt we inflict on others seems justified by service to higher convictions.

But there’s a hitch. The trouble comes in applying good sentiments to real situations. “Hate” is a word that hangs in the air like the scent of dead flowers. It’s clinging, ambiguous, and ugly. Like truth, it’s easily manipulated for political ends. For example, what exactly qualifies a community as just and inclusive? Do we really need to declare our homes and places of worship as safe spaces? If so, safe from what and from whom?

For Christians in particular, such disavowals of “hate” prompt more questions than they answer. Is biblical teaching about sex a form of hate speech? Is religious criticism of same-sex marriage motivated by fear and bigotry? Is the exclusion of sexually active gay couples from leadership in a parish or Christian ministry vindictive? In religious matters, who gets to define what words like “hate” and “hateful” mean—the community of belief and its ministries? The person who claims to be hurt or excluded? Or perhaps a state that claims to be religiously neutral?

These questions aren’t theoretical. They’re being asked and answered right now with unpleasant legal results in other developed countries. They’re being pressed in our own country with growing force. They have deep implications.