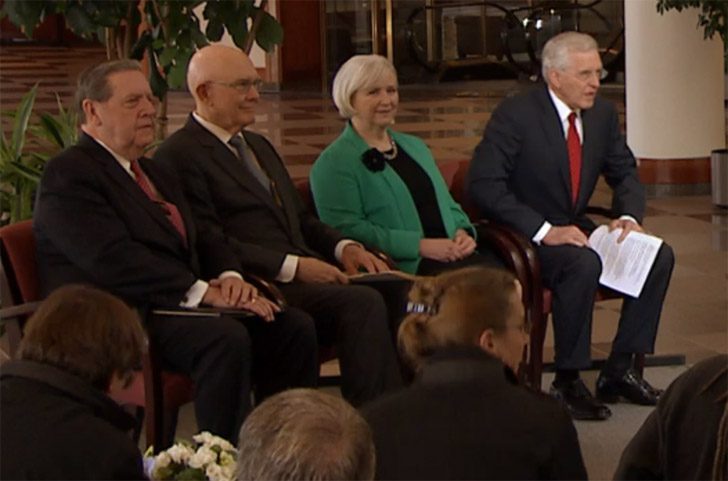 It is a fairly rare event for the LDS Church to hold a press conference, but Tuesday three Apostles and a member of the General Young Women’s presidency addressed something they consider alarming—the steady erosion of America’s treasured religious freedom and the increasing “tensions and polarization” between advocates of religious freedom and gay rights.

What’s at stake is whether millions of people with “diverse backgrounds and different views and values will live together in relative harmony for the foreseeable future” or whether the fabric of our democracy will be torn apart by the conflict. This is not hyperbole—and right now in that conflict, it is usually people who value religious freedom who find themselves on the losing side, retreating from freedoms they once thought were assured.

That the Church should address us so soberly and forthrightly about religious freedom should alert us how serious the threat is. But it also is an invitation to engage in a very particular way. It is tempting, when your precious rights are being abridged by bullies, to return the same in kind. Not to do so, while being concerned for the maltreatment of others, is the requirement of the disciples of Christ.

Elder Jeffrey R. Holland noted, “Politically, it certainly requires dedication to the highest level of statesmanship. Nothing is achieved if either side resorts to bullying, political point scoring or accusations of bigotry. These are serious issues, and they require serious minds engaged in thoughtful, courteous discourse.”

This press conference is a call to a higher level of solution-seeking than we currently see in our larger culture, but it also is a call to engage. Elder Oaks said, “We urgently need laws that protect faith communities and individuals against discrimination and retaliation for claiming the core rights of free expression and religious practice that are at the heart of our identity as a nation and our legacy as citizens.” In this he wasn’t just talking about something for government officials to do. He was also talking to us as good citizens, “we the people” to make that happen.

What we heard in the press conference was generosity toward those who advocate a different point of view, and conviction that the Church’s stand on sexuality “comes from sacred scripture and we are not at liberty to change it.”

If we don’t fight for it, religious freedom as we have known it will become a museum relic. Once something as essential as religious freedom is lost, it is very difficult, if not impossible to regain. The very idea of it fades from our collective memory and our cultural expectations. A rising generation doesn’t know what they’ve lost.

So while the message of the press conference was respectful to those who disagree, it was also a large statement of commitment. Those who seek to live by the word of God can’t stand idly by while the very structure of freedom that allows that opportunity is eaten away.

Elder Oaks said, “It is one of today’s great ironies that some people who have fought so hard for LGBT rights now try to deny the rights of others to disagree with their public policy proposals.” He pulled out several examples of religious freedom being unfairly trampled.

Gold medalist Peter Vidmar was stripped of his position as chef de mission in 2012 with the Olympic team because he had opposed same-sex marriage. “Ironically, he was denied the same freedom of conscience that commentators demanded for the gay athletes he would symbolically represent.”

Pastors in Houston had their sermons and notes subpoenaed because they were suspected of preaching against parts of a new gay rights law. Mozilla CEO, Brandon Eich, was fired for donating to California’s Prop 8 campaign.

These are not rare examples, but as current as today’s news edition. Here are recent cases not mentioned in the press conference, but a sample of what is happening everywhere.

In Canada, a salvo was fired at Trinity Western University “which exists to develop Godly Christian leaders”, because students there sign a Community Covenant, based on their religious beliefs. They pledge to abstain from certain behaviors while a student—including the use of alcohol on campus, viewing pornography and “sexual intimacy that violates the sacredness of marriage between a man and a woman.”

Some considered this pledge “abhorrent” and many legal professional societies stepped up to refuse accreditation for TWU law graduates. At the same time many Canadian corporations have signed their own pledges—to restrict the hiring of law firms to those who qualify as being “inclusive.” The message? If you are a Christian, you are no longer welcomed into the legal profession.

Such accreditation issues have emerged in many professions, hinting of career doors slamming for those who do not embrace the LGBT agenda.

A small Christian institution called Gordon College in Massachusetts is threatened with losing its accreditation because of its stance on sexuality; its standards are that students not be involved in homosexual, pre-marital or extra-marital sex. Ire erupted when President D. Michael Lindsay, along with 14 other religious leaders signed a letter to President Obama, asking for a religious exemption on the executive order forbidding federal contractors from discriminating on the basis of sexual orientation or gender identity. He had the gall to expect that at least in some instances religious institutions needed to hire people who reflected their religious viewpoint. Currently, Gordon College’s future is in jeopardy.

After more than 30 years of distinguished public service as a firefighter, Atlanta’s Fire and Rescue Chief, Kelvin Cochran was fired because of a book that he self-published for a study group at his church. The mayor called his discussion of sexual immorality, including homosexuality, discriminatory.

Chief Cochran said, “I am heartbroken that I will no longer be able to serve the city and the people I love as fire chief, for no reason other than my Christian faith. It’s ironic that the city points to tolerance and inclusion as part of its reasoning. What could be more intolerant and exclusionary than ending a public servant’s 30 years of distinguished service for his religious beliefs?

Democracy is the Loser

Elder Oaks noted, “Accusations of bigotry toward people simply because they are motivated by their religious faith and conscience have a chilling effect on freedom of speech and public debate. When religious people are publicly intimidated, retaliated against, forced from employment or made to suffer personal loss because they have raised their voice in the public square, donated to a cause or participated in an election, our democracy is a loser.”

So What is Freedom of Religion?

It is also important that Elder Holland spelled out in the press conference exactly what religious freedom means. A concerted effort is afoot to contract this basic constitutional right to mean instead the freedom to worship. “We won’t interfere with your right to worship at church (unless of course your message offends us), but watch out if you intend to take your religion outside the chapel doors.”

What is argued is that a viewpoint growing from religion should be discounted in the public square, that businesses have to park their religion at the door, that federal regulations can dictate duties to religiously-held institutions.

That frail, moth-eaten version of religious freedom is not what the Church posed in the press conference today. Elder Holland spelled out what religious freedom means—and it matters to remember this because this robust freedom is usually presented as a mere shadow of itself in too many contemporary discussions. What once was considered the first freedom, is now seen as just another freedom that might have to give way before other more important considerations.

Thus, religious freedom is spelled out—and it is a putting on record what the Church will stand for—and I imagine fight for with both talent and treasure.

Elder Holland said, “What kinds of religious rights are we talking about? To begin with, we refer to the constitutionally guaranteed right of religious communities to function according to the dictates of their faith. This includes their right to teach their beliefs from the pulpit and in church classrooms, share their views openly in the public square, select their own leaders, and minister to their members freely.

“They include the right to use church properties in accordance with their beliefs without second-guessing from government. Of course, such rights should never be exercised in ways that jeopardize public health or personal safety. They would embrace such matters as employment, honor code standards, and accreditation at church schools. That is because church-owned businesses or entities that are directly related to the purposes and functions of the church must have the same latitude and employment standards and practices as the church itself.

“Certainly, religious rights must include a family’s right to worship and conduct religious activities in the home as it sees fit, and for parents to teach their children according to their religious values—recognizing that when children are old enough they will choose their own path.

“In addition to institutional protections, individual people of faith must maintain their constitutional rights. This would include living in accordance with their deeply held religious beliefs, including choosing their profession or employment or serving in public office without intimidation, coercion or retaliation from another group.

“For example, a Latter-day Saint physician who objects to performing abortions or artificial insemination for a lesbian couple should not be forced against his or her conscience to do so, especially when others are readily available to perform that function. As another example, a neighborhood Catholic pharmacist, who declines to carry the “morning after” pill when large pharmacy chains readily offer that item, should likewise not be pressured into violating his or her conscience by bullying or boycotting.”

This declaration puts the world on notice, educates members and sends cues to other religious organizations that the Church intends to work to protect religious freedom. The Church, may, in fact, consider it an imperative in order to maintain the opportunity for full worship.

Here is the underlying principle, which sounds suspiciously like the Golden Rule. “We must find ways to show respect for others whose beliefs, values and behaviors differ from ours while never being forced to deny or abandon our own beliefs, values and behaviors in the process. Every citizen’s rights are best guarded when each person and group guards for others those rights they wish guarded for themselves.”

Frankly, I would welcome a rejection of services by those who have such strong feelings against my religious beliefs. I would simply look elsewhere. Of course, the problem compounds if _everyone_ begins holding those beliefs and no one is willing to provide the service. In that case, I guess we'll just have to resort to that old principle of self-reliance. Better that than give up principles.

In response to your question on whether people refuse LDS people services.... Yes they do. A woman in Texas was refused a position in a Preschool in a Presbyterian church even though she was qualified because she disclosed she was Mormon. It is common for churches to refuse services because the doctrine contradicts and that would put the integrity of the doctrine in conflict. It seems that forcing someone to see it your way is against all the freedoms procured by the constitution.