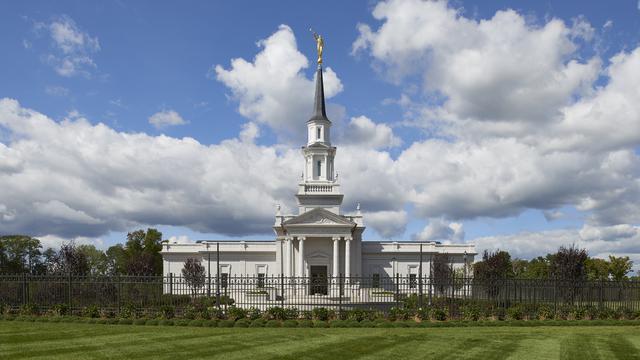 The public is invited to tour the newly completed Hartford Connecticut Temple of The Church of Jesus Christ of Latter-day Saints, the first Mormon temple in the Constitution State.

The temple is located at 2 Central Way in Farmington, on the corner of Route 4 and Melrose Drive. Tours will consist of a 10-minute video presentation followed by a 40-minute walking tour through the temple.

Following the public open house, the temple will be formally dedicated on Sunday, November 20. The dedication will be preceded by a cultural celebration featuring music and dance by the local youth of the Church, to be held on the evening of Saturday, November 19, at the Oakdale Theater in Wallingford.

The Hartford Connecticut Temple is the 155th temple of The Church of Jesus Christ of Latter-day Saints in the world. It will serve nearly 27,000 Church members in Connecticut, western Rhode Island, western Massachusetts and eastern New York.

A Mormon temple was originally proposed for Hartford in 1992, but this plan was postponed when a suitable site could not be found. In October 2010, Church President Thomas S. Monson announced that a temple would now be built in the area. Construction began with a formal groundbreaking on August 17, 2013.

The 32,000-square-foot temple is covered with approximately 9,500 separate pieces of granite cladding quarried in China. The design reflects the building style of New England and traditional American Georgian architecture. The interior features original wall murals, art glass, hand-tufted carpets and stone from Italy and Pakistan. The temple stands 117 feet tall and is crowned with a gilded statue of Moroni, a Book of Mormon prophet who is significant to Latter-day Saints for his role in the restoration of the gospel of Jesus Christ.

Latter-day Saint temples differ from the meetinghouses or chapels where members meet for Sunday worship services. Temples are considered “houses of the Lord,” where the teachings of Jesus Christ are reaffirmed through marriage, baptism and other ceremonies that unite families for eternity.

More information about the purpose of temples is available on www.mormonnewsroom.org, including downloadable, high-resolution photos of the interior and exterior of the Hartford Connecticut Temple.