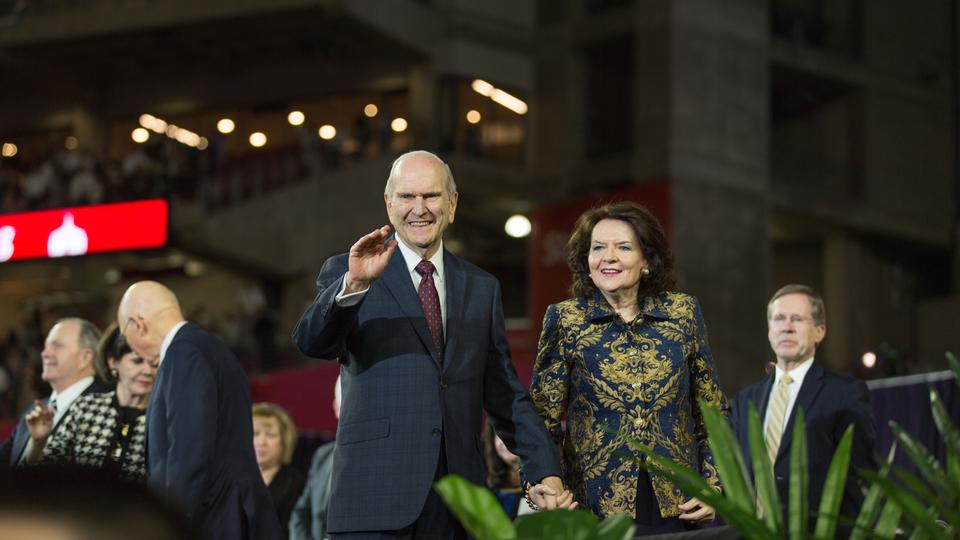 Prophet Invites 60,000+ Arizonians to Turn Homes Into Sanctuaries of Faith

More than 60,000 Latter-day Saints and invited guests at a football stadium in Arizona were encouraged by a prophet Sunday night to increase their faith practices in the home.

President Russell M. Nelson of The Church of Jesus Christ of Latter-day Saints taught Church members to do this by making their homes centers of learning and spirituality. Acknowledging that this will look a little different for everyone, he invited them to “pray each day intentionally” about how to do this. Such a cause, President Nelson said, “is that of Almighty God.”

President Nelson’s historic visit is believed to be the single largest gathering of Latter-day Saints in Arizona and among the largest crowds to hear a president of the Church in its 189-year history. He was joined at State Farm Stadium by his wife, Wendy, and President Dallin H. Oaks (one of his counselors in the First Presidency) and his wife, Kristen.

Among the invited guests Sunday were more than three dozen local faith, civic and government leaders. Prior to the devotional, President Nelson met personally with several of them, including Doug Ducey, governor of Arizona; Thelda Williams, mayor of Phoenix; the Most Rev. Thomas J. Olmsted, Roman Catholic Bishop of Phoenix; Michael M. Crow, president of Arizona State University; and Spencer Blake of Arizona’s CBS 5 television.

Governor Ducey called the Sunday evening gathering “a celebration of not only the pluralism of our country, but of what a warm and welcoming place Arizona is to people of all backgrounds and faiths.” He thanked President Nelson and the Latter-day Saint community at large for helping “salve the intractable problems that we find all across our country.”

“It wasn’t what I expected. It was much better,” Mayor Williams said of the pre-devotional meeting with President Nelson. “He is a compassionate, learned, adventurous man. I highly respect his opinions. I was very impressed with just his schedule for this year — I thought mine was bad, [but it’s] nothing compared to his. And you compare ages [President Nelson is 94], it’s remarkable.”

Bishop Olmsted said he was pleased to hear ideas comparable to Catholicism in President Nelson’s description of the Latter-day Saint search for truth. “[He said] we not only search for truth through revealed faith, but we do also through science,” Bishop Olmsted said. “And this is one of the firm convictions that we have as Catholics as well. St. John Paul II said there are two wings on which we fly toward searching for the truth — faith and reason. Science and religion together. If we’re really seeking the truth, we seek it in whatever way we can have it. Truth is always united.”

President Crow expressed similar sentiments about President Nelson’s approach to truth and life. “He talked so positively about the future and where we’re headed, and the creativity and the linkage between faith and science, and how we have to bring together all these ideas so we might create this better place for all of us.”

A Summary of Sunday’s Other Speakers

Noting the many changes the Church has made to policies and procedures over the past year, President Oaks cautioned Latter-day Saints to remember that a change of heart is what matters most.

“Change is almost always exciting,” President Oaks said. “The changes we have experienced in our Church meetings and policies should help us, but by themselves they won’t get our members to where our Heavenly Father wants us to be. The changes that make a difference to our position on the covenant path are not changes in Church policies or practices, but the changes we make in our own desires and actions.”

With Valentine’s Day only a few days away, Sister Nelson spoke of how that day can be both great and terrible — great for those who have someone to love, terrible for those suffering in loneliness.

“Our Heavenly Father and Jesus Christ want us to feel the love They have for each of us. And the Savior says to you and to me, ‘If you love me, keep my commandments,’” Sister Nelson said. “What a wonderful Valentine gift we can give to our Heavenly Father and to our Savior — as we humble ourselves and open our hearts to receive Their love and as we keep the Lord’s commandments with ever increasing exactness.”

Sister Oaks told of a friend and fellow Latter-day Saint in Chicago who, through her cancer diagnosis and treatment, has taught her the true meaning of relying on Jesus Christ during difficult times.

“When we met, I knew nothing of her condition,” Sister Oaks said. “I only felt the largeness of her soul, her desire to serve the Lord, and her great gratitude to Him for the gift of life and her family. It was only later as she confided to me her challenges and how the Lord had carried her and protected and comforted her that I realized I was watching the power of the Atonement in action. She was drawing on it, depending on it, and it was sustaining her. In our times of trial as we turn to Christ He will sustain us.”

In advance of his visit, President Nelson wrote an op-ed at the request of the Arizona Republic newspaper. His message to the readers reflects on his January visit to Paradise, California, where he and his wife, Wendy, ministered to those affected by the devastating Camp Fire. The Nelsons found that the very people they tried to comfort were comforting them in the wake of losing their daughter Wendy to cancer only 40 hours prior to their visit. The shared bond of faith between the Nelsons and those Latter-day Saints in California — a faith that God can heal hearts — led to President Nelson flying home “comforted by the reassurance that God watches over His suffering children.”