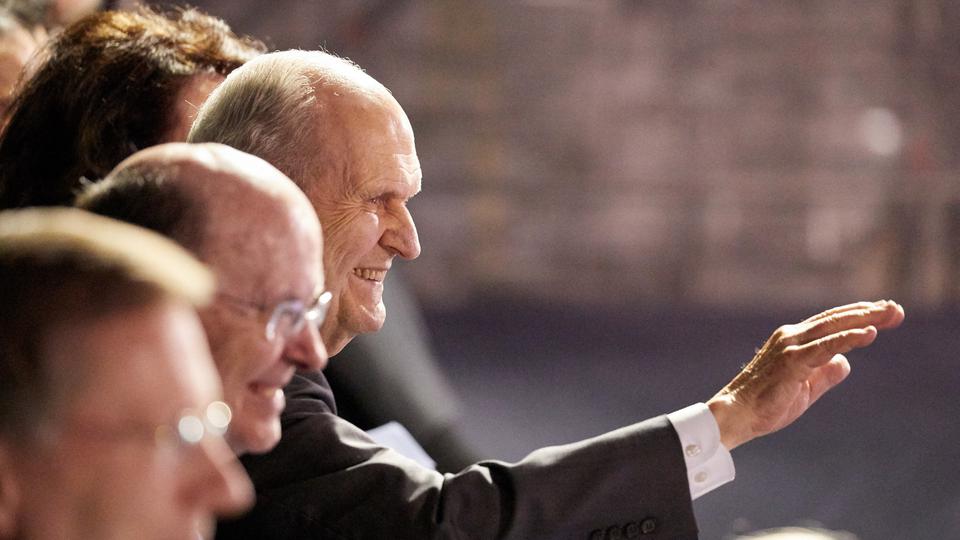 Prophet Counsels Guatemalan Saints to Teach Each Other about Jesus Christ

President Russell M. Nelson of The Church of Jesus Christ of Latter-day Saints met with members and dignitaries in Guatemala as he embarked Saturday on his nine-day ministry in Latin America. The first stop on his five-country ministry was Guatemala City, the country’s capital, known for its ancient Mayan history and nearby volcanos.

At an evening devotional, President Nelson made brief introductory remarks in English through an interpreter, before then speaking for 15 minutes in Spanish.

“My counsel today is very simple: Please keep the commandments of God,” President Nelson told hundreds of Latter-day Saints gathered at the Estadio Cementos Progreso, an outdoor stadium in Guatemala City. “Please teach your children, as well as each other, about the Lord Jesus Christ. His Atonement is the greatest event in the history of the world.”

“Remember to pray to Him each morning and evening,” President Nelson said. “Pray in your families. Pray in private. Pray to Heavenly Father in the name of Jesus Christ with the Holy Ghost. As you do so, He will direct you for good in all you do.”

The event was broadcast to congregations throughout Guatemala.

This was the prophet’s ninth visit to Guatemala. His first assignment to the country was in 1989 while serving in the Quorum of the Twelve Apostles. He reflected briefly Saturday night about previous visits to the country, including a visit to this same stadium with President Gordon B. Hinckley (1910–2008) in 1997 and a stop in 1991 with Elder Marvin J. Ashton (1915–1994). Elder Ashton dedicated Guatemala for the blessings of the gospel of the restored Church of Jesus Christ.

“Many happy memories come to my mind here in Guatemala,” the prophet said.

Three other Church presidents have traveled to the country, including Gordon B. Hinckley, Spencer W. Kimball and David O. McKay, who was there in 1954.

The prophet is traveling with his wife, Wendy, and Elder Quentin L. Cook of the Quorum of the Twelve Apostles and his wife, Mary.

Earlier at the devotional, Elder Cook spoke in English about how the families of Guatemala can be blessed by building Zion (a state of oneness and unity) in heart and home, being a good example in the community, and focusing one’s vision and goals on worshiping in one of the faith’s temples.

“Be an example in your community. Be a light on a hill. Don’t be in camouflage,” Elder Cook said. “You probably think I’m talking about missionary work — and yes, that is important. But I’m more concerned about being an example at work and in the community and at school.”

Drawing on his experience as a local Church leader in San Francisco, Elder Cook said he learned that those Latter-day Saints who lived their faith openly “had additional protections. Their coworkers were even determined to see that no one would offer them an alcoholic drink. They were not expected to join the parties and unrighteous associations that sometimes lead to terrible consequences. Children are usually protected if people know what they believe. My emphasis is on not being in camouflage so you can be protected. But obviously you can also be more effective missionaries if people know who you are.”

President Nelson will travel to Bogota, Colombia, on Sunday, where members will gather in Movistar Arena to hear words of inspiration from the senior leaders.

President Nelson’s first assignment to the country was in 1989 while serving in the Quorum of the Twelve Apostles. Three Church presidents have traveled to the country, including Gordon B. Hinckley, Spencer W. Kimball and David O. McKay, who was there in 1954.

President Nelson’s Latin America ministry runs August 24-September 2, 2019. The senior Church leaders left Salt Lake City Saturday morning for the same-day visit to Guatemala. Other scheduled stops include Colombia, Ecuador, Argentina and Brazil, where other gatherings of Latter-day Saints and friends of the faith, along with outreach meetings with government and religious leaders, will be held.

Nearly 278,000 Latter-day Saints in approximately 450 congregations live in Guatemala. Missionaries first arrived in the Central American country in 1947. There are now seven missions. Two temples are operating in Guatemala, including the Guatemala City Guatemala Temple and the Quetzaltenango Guatemala Temple.

President Nelson became the 17th president of the Church in January 2018. Since that time, he has traveled to Europe, Africa, Asia, North America, South America and the Pacific to minister to Latter-day Saints and meet with government and religious leaders, as well as the media.