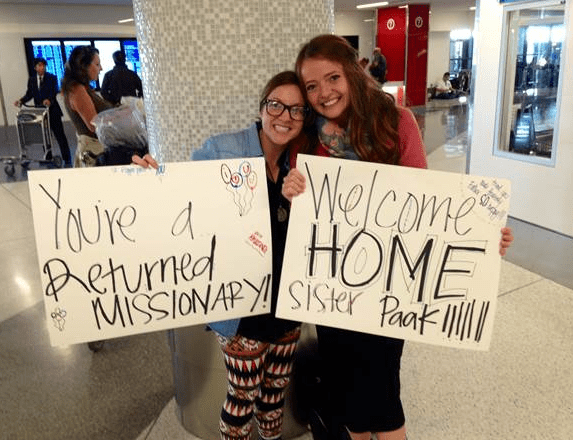 I have been dancing since I was about 2 or 3 years old and danced competitively with a group of LDS dancers in Las Vegas during my teen years. After graduating from high school I moved to Hollywood to pursue my dancing dreams. While dancing professionally in L.A. we performed at many different theaters around LA including the famous Orpheum Theatre, and in TV commercials, music videos, Disneyland, concerts and TV shows. I was privileged to work around many talented dancers, but mainly those who focused on Jazz, Hip Hop, Contemporary, Tap, and Ballet.

In October 2010 when I moved to Los Angeles, I was introduced to Loren Palmer and Kelli Erdmann, by my LDS friend Hayley Clark. We were all in LA pursuing our love for dance and instantly became best friends. All of us were LDS except Loren. We had agents who sent us to various auditions around Hollywood. We were having the time of our lives.

Loren Palmer as a Disneyland performer.

Towards the end of October, Loren, who was not LDS, had some people over to carve pumpkins at her house. It just so happened that it ended up being just us 4 girls late that night talking about everything. Then Loren asked a question about religion. I do not remember what the question was, but that’s not important. What is important was the outcome of that question, which turned into a 3 hour conversation leading into the wee hours of the morning! At the end of this conversation Loren asked if she could have “one of those books we keep talking about.” We immediately said yes. When I was packing to move to L.A., I had brought with me two copies of the Book of Mormon. I didn’t know then why I was adding them to my luggage.

From November 2010 to March of 2011, Loren took the lessons from the missionaries in our YSA ward, Elder Grigsby and Elder Bautner. We were able to attend those lessons and help Loren throughout this incredible journey. At one point, I remember the missionaries asking us to watch The Restoration video with Loren, so we picked a night, went to Loren’s home and started the movie.

In the middle of the movie, during the most important scene when God the Father and Jesus Christ appear to Joseph Smith, I remember Loren telling us, in that moment, that she had goose bumps all over her body. I remember being so excited and all of us explaining to her that that was the Holy Ghost testifying to her that what she was watching and feeling was real and TRUE. The Spirit was so incredibly strong. I remember all 4 of us smiling and talking about the First Vision and how it really was true, and the Spirit she felt can always be with her through baptism.

Bishop Terry Price was our Bishop in Glendale, California.

Throughout this process, Loren was coming with us to church every week and attending FHE every Monday. Everyone in the ward knew and loved her. The four of us girls were known in the ward as “The Dancers”. It was a wonderful ward. Loren had so many supporters and other converts in our ward that would talk to her and help her along her way.

On March 13, 2011, Loren was baptized into The Church of Jesus Christ of Latter-day Saints. Let me tell you, it wasn’t easy for her. She had a lot to overcome, a crazy past in high school, old boyfriends, non-supportive parents, and best friends from back home telling her they wouldn’t be friends if she went through with her baptism. But Loren knew the gospel was true. She absolutely knew that this Church is true and that it fit her and that she needed to do this.

That day was so amazing and special. She received her own set of scriptures and a clean slate. From there, we were able to attend her meeting with the Patriarch of our Stake to receive her Patriarchal Blessing. I remember all of us crying so hard and the Spirit being so strong in the Patriarch’s home. What an amazing experience to share with her.

A year and a half later, Loren mentioned to us that she wanted to serve a mission. And to be completely honest, we didn’t really believe her! She was dating a boy, pretty seriously, and honestly, I never expected such a newly baptized girl to say that. So, in October 2012 when the glorious announcement was made that the young women of the church could serve a mission at the age of 19 instead of 21, I immediately received a text from Loren that said, “I’m starting my papers on Monday.” Needless to say, I freaked out. By this point I had also decided to serve a mission and was also in the process of filling out my mission application.To be doing all of this mission prep at the same time with one of my best friends made me even more excited to serve a mission. To see her desire to serve the Lord made my desire increase; it was incredible!

I moved back home to Vegas in November and received my mission call a couple weeks later to serve in the Alaska Anchorage Mission and went through the temple to receive my own endowments on December 7, 2012. I happened to be visiting the dance girls in L.A., on November 27, when Loren received her call to serve in the China Hong Kong Mission. We have that moment on video. We were all screaming and crying and so, so, so happy! I was able to go with Loren to receive her own endowments in the Los Angeles Temple on December 27, 2012. The tears were flowing that day. I couldn’t believe that I was in the temple with one of my best friends who was going on a mission and had only been a member of the church for a year and a half. How great was my joy?! Through the roof!

Two returned missionaries, Brynn and Loren, at the airport.

Loren and a bunch of my L.A. friends, including Hayley and Kelli, came to my farewell in Las Vegas on February 17, 2013. I was only in the MTC for 12 days and just barely missed Loren who entered April 3, 2013. During our missions, Loren, Hayley, Kelli and I, sent letters and emails to each other. We have the most incredible and amazing friendship that will last forever.

I came home from my mission September 17, 2014. I was able to greet and pick up Loren from the airport when she returned from the field on November 5, 2014. Let me tell you, that embrace was the sweetest thing ever!  Loren and I were both able to report our missions at the Glendale 7th YSA Ward in California on November 9, 2014. I am so incredibly grateful to have this Gospel in my life and to have shared it with Loren. Kelli, Hayley, Loren and I will forever keep in touch and will forever remember the moments that we have had feeling the Spirit and supporting one another in our dance and gospel adventures.

The Church is True. 🙂