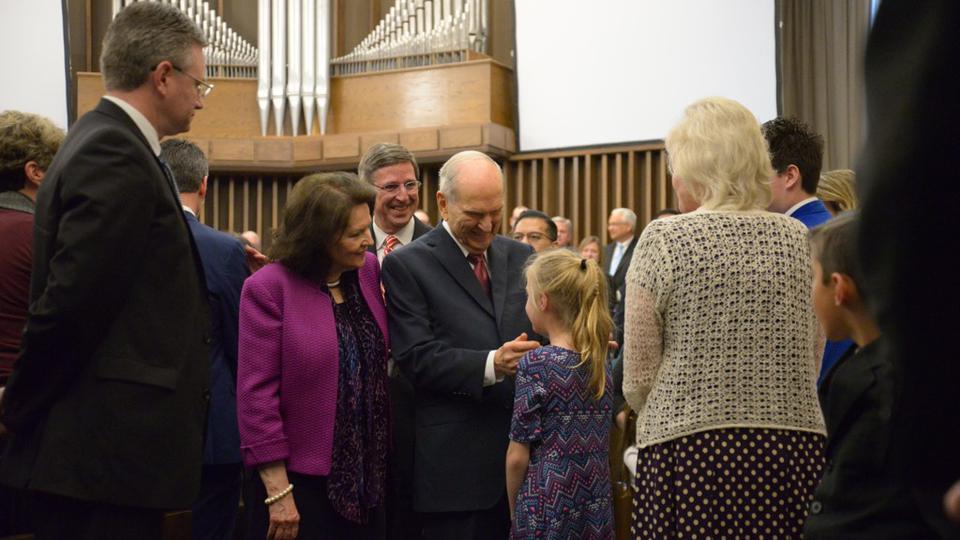 As people in northern California recover from the deadliest wildfire in state history, the worldwide leader of The Church of Jesus Christ of Latter-day Saints shared words of hope and inspiration with those who lost everything.

“We care about you. We care for you, and we love you,” said President Russell M. Nelson, speaking at a special stake conference in Chico, California on Sunday, January 13, 2019. “We, as visitors, can hardly comprehend the losses that you have sustained — loss of life, loss of homes, loss of jobs, loss of work places, and much, much more. The accounts of your suffering are exceeded only by the accounts of your ministering.”

President Nelson, a 94-year-old revered as a prophet by Church members around the world, was joined by his wife, Wendy Watson Nelson. Accompanying the Nelsons were Elder Kevin W. Pearson of the Seventy, who oversees the North America Southwest and West Areas, and his wife, June Pearson.

“We have come to minister unto you. We want to bring you hope,” said President Nelson. “I know the Lord has been guiding you in your efforts to recover and move forward in faith.”

The Camp Fire, which started on November 8, 2018, heavily damaged the town of Paradise and surrounding areas. At least 86 people were killed, and tens of thousands of people were displaced, including 1,400 Latter-day Saints. In one congregation in Paradise, roughly 95 percent of the Church members lost their homes.

“We mourn the loss of our second daughter,” said President Nelson in a media interview Sunday, noting that as a father he feels a deep sense of grief. “And yet, there’s nothing we’d rather do than try to be of help to others. … You learn that everybody has challenges and if you want to feel better, forget about yourself and serve somebody else.”

Sister Nelson also touched on that theme as she spoke to the gathering in Chico.

“In the midst of heart-wrenching loss, it’s natural for our souls to long for things to be the way they used to be. When we realize that that simply is not possible, we seek for those things that will never change,” said Sister Nelson. “The truths of the restored gospel of Jesus Christ are never sweeter than in times of loss.”

People in northern California have felt that loss acutely in the aftermath of the wildfire that tore through the picturesque town of Paradise, about 15 miles east of Chico.

“It was apocalyptic,” said John Meyer, president of the Chico California Stake. “It was just stunning how quickly — within a matter of hours — an entire community was removed.”When the fire hit, members of the Church jumped into action, working to provide food, clothing, and counseling to survivors.

“Everything we had, we opened up to the community,” said Meyer. “If a person was a son or daughter of God and they had a need, we were eager to assist.”

Elder Pearson praised the work of Church and community members, calling it “nothing short of extraordinary.”

“Countless acts of selfless service and personal ministry across the community have blessed and sustained those in need,” said Elder Pearson.

Relief efforts still continue. Jo Anne Madsen, a Latter-day Saint women’s leader in Chico, has been working to gather starter kits with basic supplies for families who are rebuilding their lives.

“There’s going to be a need for a long time,” said Madsen. “If we can help them on small things like this, then they can concentrate on the bigger things.”

Prior to the stake conference Sunday morning, President and Sister Nelson met with community and civic leaders who have worked with the Church in the aftermath of the fire. Andy Vasquez, a Yuba County supervisor, joined many of those leaders in attending the stake conference.

“It was an opportunity to see the leader of a church that cares about our community,” Vasquez said.

“I like supporting organizations that are supporting the community,” added Pamela Teeter, a former Paradise Chamber of Commerce president who lost her home, business and other properties in the Camp Fire. “The more that we can embrace everything and just move forward together with everybody’s help and support, the easier it’s going to be.”

Following the conference, President Nelson and the delegation traveled to Paradise to view the damage and meet with several Church members who lost homes and businesses in the fire. Rob and Gretchen Harrison and their three children met the group in front of what used to be their home. In addition to getting his own family back on their feet, Rob Harrison serves as a leader in his local congregation and has been helping other Church members in their recovery.

“These people are acting just like the Lord would act were He here,” said President Nelson as he visited the Harrisons. “There are challenges, but with faith — keeping the commandments and knowing that God’s in charge — all will be well in the long run.”

The Harrisons said the visit by the Church leaders buoyed them up.

“I feel more hopeful,” said Gretchen Harrison. “I feel like everything’s going to work out and this is how it’s supposed to be.”

Speaking at the Sunday meeting, President Nelson told the story of Horatio Spafford, an attorney and investor in Chicago in the 1800s who suffered immense financial and personal loss. Despite these tragedies, Spafford went on to write the hymn “It Is Well with My Soul.”Touching on the theme of that hymn, President Nelson said, “With the Lord as our Exemplar and Redeemer, whatever adversities or tragedies may come our way, each of us will be able to say, ‘It is well with my soul.’”