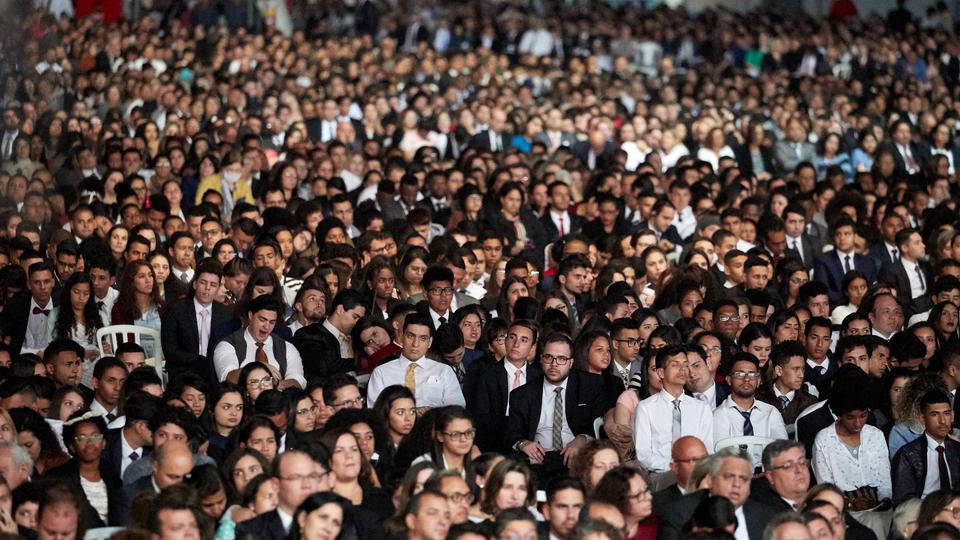 President Nelson Speaks to Largest Gathering Outside the U.S.

“I think some of these children you have are some of the brightest children that the Lord has ever let come to planet Earth,” said President Russell M. Nelson of The Church of Jesus Christ of Latter-day Saints as he wrapped up his nine-day Latin America ministry in São Paulo, Brazil.

More than 37,000 people, including many families, lined up for up to eight hours before a devotional on Sunday at the Anhembi Convention Center. Many were seated five hours before the meeting began, filling the venue. This was the largest gathering President Nelson has spoken to outside of the U.S.

“I’ve just come as a servant of the Lord,” said President Nelson, who spoke without a prepared talk. Instead, he brought his scriptures to offer advice to the parents.

“You have this great responsibility to teach these children,” he said. “Help your children to know that their highest blessings will be given in the temples of the Lord.”

An 800-member choir provided the music for the meeting, which was broadcast to more than 170,000 Latter-day Saints in all congregations in Brazil.

President Nelson and his wife, Wendy, and Elder Quentin L. Cook of the Quorum of the Twelve Apostles and his wife, Mary, traveled to five countries, including Guatemala, Colombia, Ecuador, Argentina and Brazil. The prophet addressed thousands of members and friends of the faith and met with high-level government leaders and media.

The other senior leaders also offered counsel to those attending the devotional in São Paulo.

“We can be in the world but not of the world,” taught Elder Cook. “We can be determined to not let the world’s wickedness intentions and divisions invade the sanctity of our united effort to follow and worship the Savior in our homes and families.”

“We can also be one with our families by making our homes sanctuaries of faith,” the apostle added.

“We can bring to the Lord all of our questions, and we will be given answers,” said Sister Nelson. “You and I know one thing that always blocks revelation. It is contention so let’s talk about how to remove contention from our lives.”

“Every time we visit the temple and perform ordinances there, we are walking on holy ground,” stressed Sister Cook. “We are walking where Jesus walks. No wonder we feel his love so powerfully.”

During President Nelson’s travels through Latin America, he encouraged members to focus on the temple.

Elder Cook said President Nelson has done much to help Latter-day Saints understand the importance of temples. “I do know the Lord has given him guidance with respect to temples that are blessing us.”

On Saturday, the senior leaders attended the São Paulo Brazil Temple, the first temple in South America, dedicated in 1978.

“It is most remarkable when you see the mantle of a prophet when he’s out among the people,” said Elder Cook in an interview with Church media outside the temple. “To see it in all of these countries has been just really remarkable. … It’s been a great experience for us.”

Sister Cook remarked, “To see the faithful members who come early. They sit. They wait. They’re showing such respect for the prophet and the Lord. … It’s been so incredible and so sweet.”

Friday, the prophet met with the missionaries in the capital of Brasília.

The senior Church leaders left Salt Lake City on August 24 and will return home on September 2 in time for President Nelson’s 95th birthday celebration. The event, planned for Friday, September 6, at the Conference Center in Salt Lake City, will be broadcast live in eight languages on ChurchofJesusChrist.org and other Church channels, beginning at 8:00 p.m. Mountain Daylight Time.