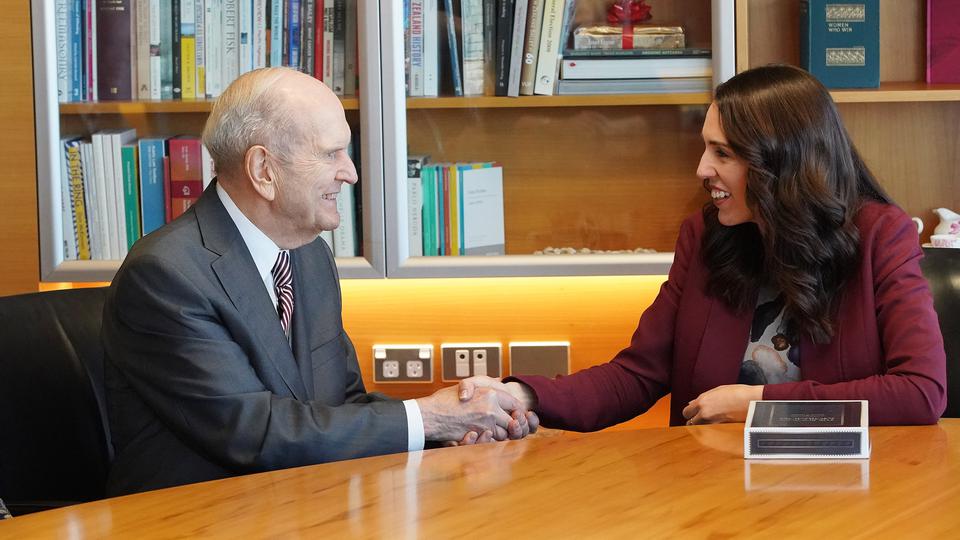 “I think the world will discover a real leader here,” said President Nelson concerning his visit with the prime minister. “It’s an unlikely scenario—a young mother leading a great nation, a peacemaker, a policymaker, consensus giver. We’re very impressed with her. She’ll have a great future.”

The global faith leader expressed his condolences to the prime minister following the terrorist attacks on two mosques in Christchurch in March. President Nelson said, “We will be making contributions to those mosques to help them repair from their damages.” Pacific Area President Elder O. Vincent Haleck added, “We’re clearly sensitive to what happened there, and our hearts were broken when we heard about the tragedy that took place and the loss of life, and so the Church is reaching out … to lend a hand, to be there for our brothers and sisters who are another ethnicity and another religious group.”

President Nelson explained that they discussed the diverse population in New Zealand and its differences. “We have that problem in all countries of the world—how people can have different points of view and yet learn to live in love with one another.”The New Zealand prime minister has been in office since October 2017.

President Nelson arrived in Wellington to meet with the prime minister after speaking to a capacity crowd Sunday evening at the International Convention Centre in Sydney. His wife, Wendy, and Elder Gerrit W. Gong of the Quorum of the Twelve Apostles and his wife, Susan, are traveling with him.

From Wellington, the prophet traveled to Auckland, where a devotional at Spark Arena will be held Tuesday evening that will be broadcast to all congregations in New Zealand. Prior to the devotional, the senior Church leaders will meet with missionaries in Auckland in a chapel located next to the Missionary Training Center. The meeting will be broadcast to all missions in the Pacific Area.

Hundreds of Latter-day Saints greeted President Nelson in Kona, Hawaii, last Friday on the first stop of his visits. From there he traveled on Saturday to Apia, Samoa, for an outdoor devotional and meetings with government and faith leaders.

The Pacific ministry runs May 16–25, 2019. Other scheduled stops include Suva, Fiji; Nuku‘alofa, Tonga; and Papeete, Tahiti, where the prophet will attend a 175th anniversary cultural program celebrating the arrival of the first missionaries to French Polynesia.

The Church, headquartered in Salt Lake City, has more than 16.3 million members worldwide and more than 200 temples either in operation, announced, under construction or being renovated around the world.

The Hamilton New Zealand Temple is currently closed for renovation. A new temple has been announced in Auckland.

President Nelson was sustained as the 17th president of the Church in January 2018. Since that time, he has traveled to Europe, Africa, Asia, North America, South America and now Oceania and Australia to minister to Latter-day Saints and meet with government and religious leaders as well as the media.