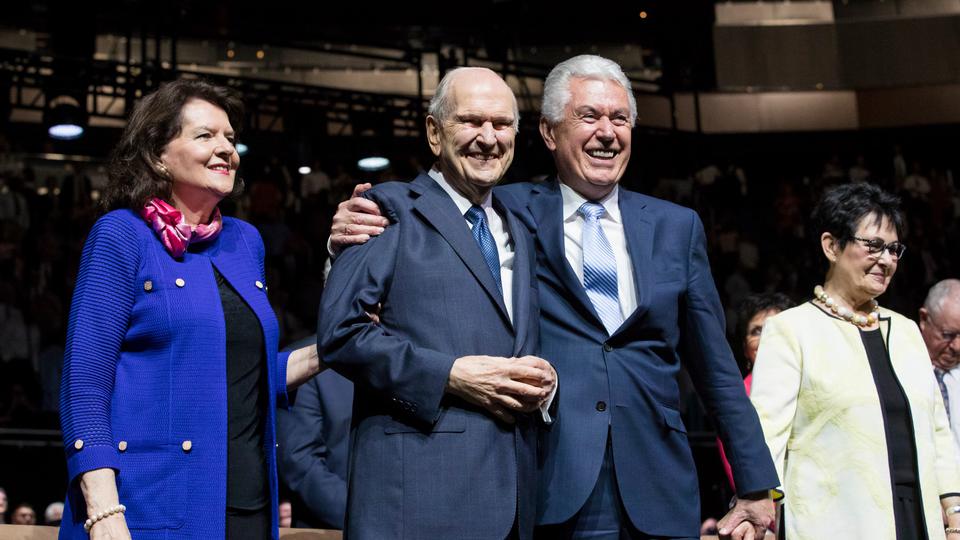 “Orlando can claim to be the site of many happy memories for countless individuals. But lasting happiness, even joy, comes to those who keep the commandments of God,” said President Russell M. Nelson of The Church of Jesus Christ of Latter-day Saints. President Nelson addressed thousands in a gathering in Florida on Sunday evening, a destination known around the world for its theme parks and sunny beaches.

“I love children,” said President Nelson, the father of 10 children and 57 grandchildren, as he shared a picture of his new great grandchild with an estimated 15,500 Latter-day Saints and invited guests gathered in the Amway Center in downtown Orlando. The meeting was also broadcast to Church meetinghouses in the area.

The prophet of the global faith and his wife, Wendy, traveled to Florida on June 9, 2019, following his recently completed Pacific ministry.

President Nelson was also joined by Elder Dieter F. Uchtdorf of the Quorum of the Twelve Apostles and his wife, Harriet, and Elder Shane M. Bowen of the Seventy and his wife, Lynette, who also shared inspirational messages.

Prior to the devotional, President Nelson met with Latter-day Saint youth and invited guests, including government, interfaith and business leaders.

President Nelson met with the mayors of Orlando and Orange County, a school board member and the owner of a local business, where 49 people lost their lives in a mass shooting three years ago this week.

“I was moved that [President Nelson] knew what we were doing,” said Barbara Poma, executive director of the onePULSE Foundation, a nonprofit organization established to create a sanctuary of hope following the tragedy. “He was so kind to me and that meant a lot.”

Poma continued, “It’s really been an interesting time emotionally for everyone here. Everyone is affected. We come together on June 12th to really stand together in solidarity to comfort one another to help us move through a healing process.”

President Nelson began his address by inviting the children in the audience to join him in singing one verse of “I Am a Child of God,” as he did at some locations during his recent visit to the South Pacific.

“The most profound truth is that God is our Father,” said the prophet, who also shared other truths that he said have the power to changes lives. “May we pray to Him at any time, any place. This beats anything your smart phone or Google can offer.”

President Nelson also taught that Jesus is our Savior, we are children of God, the Book of Mormon is the word of God and the gathering of Israel is well underway.

“Today we extend a special welcome to those who are not members of The Church of Jesus Christ of Latter-day Saints,” said Elder Uchtdorf, who first visited Florida as a young Air Force fighter pilot. “Our Church members here in Florida are some of the finest in the world — people of good heart — kind and loving.”

He extended an invitation to audience members to come and experience what the Church has to offer, including opportunities to “heal, serve and lift others.”

“Of course, we are not perfect,” stressed Elder Uchtdorf. “But those who come to see will feel in our congregations the love and unity we have among us and for all of God’s children, regardless of language, nationality, socioeconomic background or situation in life.”

Sister Uchtdorf told the story of how she joined the Church as a young girl in Germany, following the passing of her father. “My testimony to you is that the restored gospel of Jesus Christ has a message of wonder and hope.”

Elder and Sister Bowen discussed the importance of following the living prophets.

“Each person is entitled to personal inspiration and revelation as it pertains to his or her personal life callings,” said Elder Bowen, a counselor in the North America Southeast Area Presidency. “However, when it comes to receiving revelation for the entire Church, only one is authorized — the president of the Church.”

“The happiest place on earth? It could be Orlando, or Osaka or Odessa. It is wherever the Spirit of the Lord dwells in the hearts of the people,” President Nelson concluded.

Florida is home to nearly 159,000 Latter-day Saints in 270 congregations and two temples, including the Orlando Florida Temple and the Fort Lauderdale Temple.

My son and I came early and enjoyed the atmosphere and excitement before President Nelson's arrival. Hearing the prophet was a spiritual feast. My son enjoyed the medical information that Pres. Nelson shared and how much it benefits people today. Pres. Uchtdorf and his wife shared experiences from the post- war time in Germany. This brought back experiences of my own. All the talks were very comforting and spiritual to me and emphasized the importance of our scriptures. The book of Mormon, if carefully read, is so important for us to understand how the Lord deals with His people and that Joseph Smith is a true prophet. I wish that all people would listen to the prophet and make decisions for themselves and others accordingly.