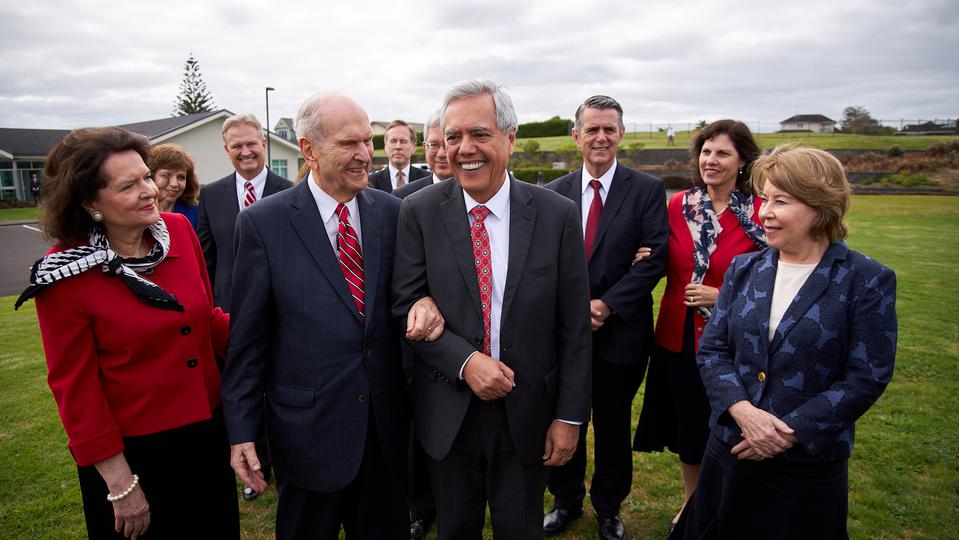 The location of a new temple of The Church of Jesus Christ of Latter-day Saints in Auckland, New Zealand, has been announced by President Russell M. Nelson during a Tuesday evening devotional in the country’s largest city. “Today I am pleased to announce that the new temple will be built in Auckland on Redoubt Road,” said President Nelson. The temple will be on a hill between the missionary training center and the Redoubt stake center. President Nelson said the temple will be a “two-story building with a granite exterior. Its light and beauty will be highly visible.”

President Nelson addressed 12,000 Latter-day Saints and friends of the faith at Spark Arena, passing the midway mark of his nine-day ministry visit to the South Pacific.

Prior to the devotional, the prophet met with local leaders, including Auckland Mayor Phil Goff, who spoke briefly at a reception. Mayor Goff said, “President Nelson, … your Church is a very important faith organization in New Zealand. The Church performs a very important role in the values that you teach and in the community service that you give us.”

He gave special thanks to the Church for its response to the March 15, 2019, terrorist attacks on two mosques in Christchurch that killed 51 people. “Your Church was one of the first churches to come out to condemn the act, to express your solidarity with people of the Muslim faith,” he said. “Your missionaries in Christchurch helped at the community center. Your ladies in Dunedin helped set up a women’s support center.”

After the devotional, Adams and Tulelo each spoke of the significance President Nelson’s message had for them individually.

“[President Nelson’s] message tonight really hit home for us because we have two young kids [7 weeks and 17 months],” Adams said. “It touched me because it is true — we must actually teach them that the Savior loves us. It’s our responsibility as parents to make that happen. If we have someone like the prophet to help direct us, to guide us, to counsel us, we’ve got something to look to. It’s important for us to have that. Everybody in this room felt his love and felt his sweet voice. We are very excited to have him down here.”

“He came here not just to reach out to all those others, but because the Lord new that in this year I would be serving in New Zealand,” added Tulelo. “And at this time I needed to hear these things to make my journey a little easier. And who else better to do it than the prophet of the Lord?”

The global faith leader is visiting New Zealand, an area known for its indigenous people and picturesque scenery, as he continues his Pacific ministry visits to seven countries.

In a meeting with Muslim leaders in Auckland, the prophet donated $100,000 on behalf of the Church for the rebuilding effort. The Muslim leaders in attendance included Dr. Mustafa Farouk, president of the Federation of Islamic Associations of New Zealand, and Imam Alabi Lateef Zirullah, leader of the Linwood Mosque, one of the two mosques that were attacked.

“We’re brothers,” reflected President Nelson on his meeting with the Muslim leaders. “It’s so touching when you think of what tragedy before those innocent people in a mosque worshipping to be gunned down like that. It’s incomprehensible anybody could do that to another human being.”

President Nelson is traveling with his wife, Wendy, and Elder Gerrit W. Gong of the Quorum of the Twelve Apostles and his wife, Susan.

Tuesday morning, the senior Church leaders spoke to more than 2,600 missionaries in a broadcast to the Pacific Area originating from a chapel located next to the missionary training center in Auckland.

“Take a look at who you really are,” President Nelson encouraged the missionaries. “Every day one can become a little bit more like Jesus wants us to become. It’s a lifetime project. Practice it every day.”

Elder Gong reminded the missionaries of the prophecy the Prophet Joseph Smith recorded in Doctrine and Covenants 122:1, which states, “The ends of the earth shall inquire after thy name.” He continued, “Did you ever think that when you share your testimony, told by who you are and by what you say, and by kindness, that you are fulfilling that prophecy? That you uniquely can fulfill that prophecy where you are serving? … You have the opportunity, the blessing and even [the] responsibility to do so.”

On Wednesday, President Nelson heads to Fiji for a devotional meeting with Latter-day Saints in Suva.

The Pacific ministry runs May 16–25, 2019. So far, President Nelson has visited Kona, Hawaii; Apia, Samoa; and Sydney. Other scheduled stops include Nuku‘alofa, Tonga, and Papeete, Tahiti, where the prophet will attend a 175th anniversary cultural program celebrating the arrival of the first missionaries to French Polynesia.

President Nelson was sustained as the 17th president of the Church in January 2018. Since that time, he has traveled to Europe, Africa, Asia, North America, South America and now the geographic area of Oceania, which includes Australia, to minister to Latter-day Saints and meet with government and religious leaders as well as the media.