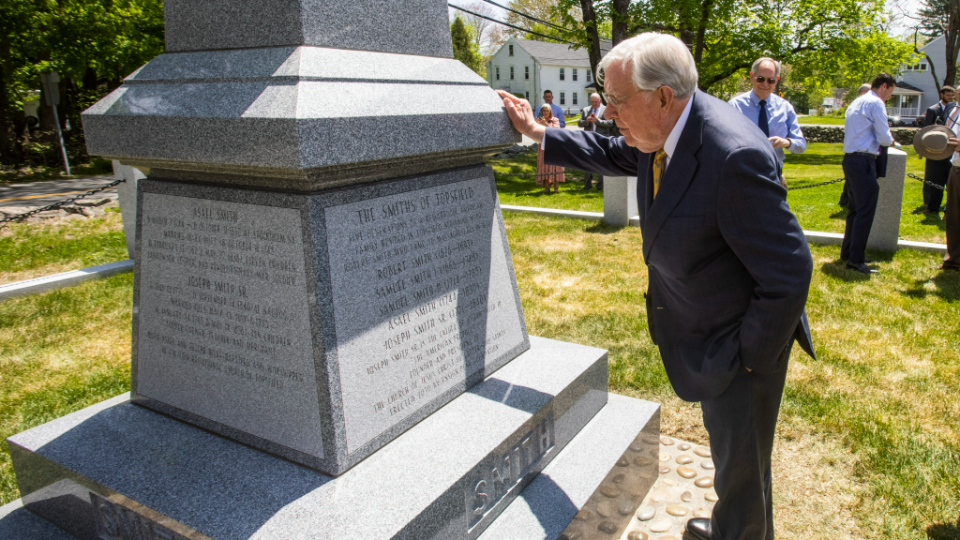 President M. Russell Ballard, Acting President of the Quorum of the Twelve Apostles and a great-great-nephew of Joseph Smith Jr. (the founder of Jesus Christ’s global Church), gathered on a warm and sunny Saturday morning with around 350 others at the Pine Grove Cemetery in Topsfield, Massachusetts, to dedicate a new monument to Joseph’s ancestors.

“It’s a very important thing for us to never lose sight of those who laid the groundwork and built the paths that have led to light and truth that has now been available to those who would be willing to seek it and find it, embrace it and join it,” President Ballard said.

In 1873, apostle George A. Smith erected a monument in the cemetery to mark the burials of Samuel I and Samuel II (both are buried in the cemetery at unknown locations). The new monument was funded by private Latter-day Saint donors and installed in September 2020, but the dedication was delayed due to COVID-19. The monument is fashioned from the same Barre granite as the Joseph Smith Birthplace monument in Vermont. It is wider (five feet) and taller (nine feet, six inches) and heavier (it weighs nearly 14,000 pounds) than its 1873 counterpart (which stands just feet away) and tells a more complete story of the Smith family. Both monuments are enclosed with a fence and gate.

In his dedicatory prayer, President Ballard asked the Almighty to bless all who come to this cemetery to feel its spiritual gravitas.