Politics and the Approach of General Conference | Meridian Magazine 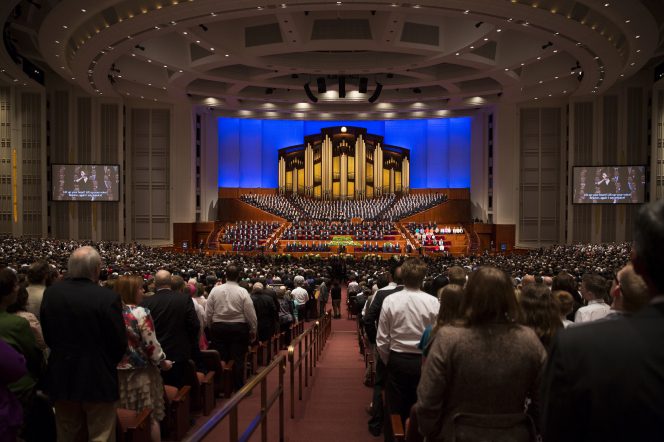 Politics and the Approach of General Conference

While many self-styled Mormon intellectuals set faith at odds with critical thinking, Meridian’s Expand promotes an alternative model of the life of the mind. Here we engage current moral, political and cultural issues with intellectual rigor from a faithful LDS standpoint.

This weekend is the General Women’s Session of General Conference, and I’m excited! I love to hear from our leaders, and I think the church’s current crop of women leaders is an extraordinary and admirable group well worth hearing.

As I read this advance news release that the main focus of the Women’s session will be families, I realized something sad: I don’t remember last fall’s Women’s meeting very well.

What do I remember? All of the chatter about the meeting. And not the substantive discussion of points from the talks; I remember the politics.

Politics and General Conference? I wish it weren’t so. But like so much in our culture, General Conference has become thoroughly politicized by strident voices, and I think that has overshadowed the messages the Lord is trying to get to us.

What I mean by politicization is that we (I include myself, and hopefully not you) have been culturally programmed with an instinct to analyze how a talk or action will be perceived by various factions. How will that talk sound to LDS women? Will that phrase alienate the LGBT community? That talk was signaling his approval of X political philosophy, right? Why haven’t church leaders adopted that practice/term that would signal their alignment with that popular cause?[i]

The problems with this approach are probably obvious:

So don’t be fooled into worrying about how this statement or that action will play out politically. The Lord chose our leaders, and is more than capable of running the church through them.

This General Conference, I’m going to try hard to approach every talk as a little child, soaking in both familiar and new ideas with eagerness. No cynicism. No criticism. No debates.

I think it will be refreshing.

[i] A friend wrote the following parody which brilliantly illustrates the thought processes I’m describing here:

Jesus: One of you will betray me.

Simon Zelotes: Finally! He said “betrayal.” This is a clear signal that we will soon betray our oath to Rome, and rise up in rebellion. He can’t say it outright, though, since Peter is dragging his feet, and he has to maintain the illusion of unity in the quorum.

Andrew: Hmmm. He said “me” instead of “The Son of Man.” He’s probably backing off on the Messianic claims due to the mass apostasy we had near Galilee. But, he has to do it gradually, so as not to spook the conservatives.

Timothy: Dang it! He’s displeased with my protest that he was going to die and we with him if we came to Jerusalem, so he’s pointing the finger at me but still has plausible deniability.

Peter: Nice to see a smack-down on Timothy’s apostasy and doubt.

There is one area in which our leaders could be a bit more "political": They could remember in their prayers the Christians in the mid-East who are being persecuted by ISIS and the Muslim Brotherhood.

Politicizing religion is an attempt to pull a layer of wool over the the eyes of the church members by the father of lies. If we allow ourselves to be distracted by politics, we will miss the message and he has won. We need to ignore the distractions of the mocking, derisive pointing fingers of those who live in idealogically spacious buildings. Those who have entered in at the gate have better things to focus on. I, for one will focus on the light of the gospel offered in the conference talks. Let the rest of the world try to figure it out in the dark as they may chose. I invite them to be at peace and just listen without discord.