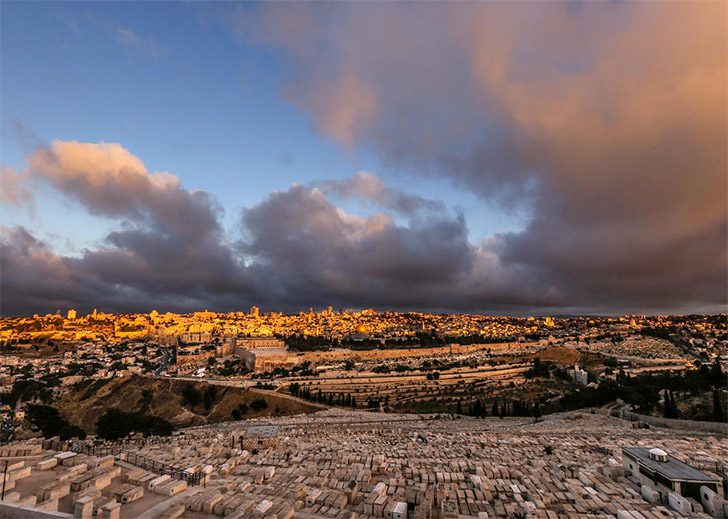 How do you capture the ancient nature of Jerusalem? Today’s city boasts a million population (greater Jerusalem) and modern structures and buildings that just don’t bespeak the feeling of ancient. Yet Jerusalem has maintained a building code that buildings must be made from the Jerusalem dolomite or dolomitic limestone. Hence the city naturally has the name, “The City of Gold.”

Today I offer a beautiful and rare shot of the city that Jesus knew so well—a wonderful addition to any home. And I have this one in horizontal or vertical format. Here’s the story of obtaining these two images.

I’ve shot many hundreds of pictures with numerous angles of the ancient city of Jerusalem. I’ve published a few of them over the years but I was never quite satisfied. On this particular day, things were different.

We were on a 24-day shoot in the Holy Land in spring. Our storyboard called for a “dramatic shot of Jerusalem from the Mount of Olives with beautiful light.” Photographers spend a lot of early morning and late afternoon time shooting in golden light, but the Middle East is more difficult because there are days when the light is so flat, you only have about 30 minutes of perfect light in the morning and only another hour in the evening. During the day the light is harsh, bright and uninteresting.

We had arrived at the Mount of Olives overlook just a few minutes before sunrise. I set up the camera and then began to watch an unparalleled light show. The dawn first touched the far western part of the holy city then moved towards us building by building, holy site by holy site. This shot was taken about at the half-way point of the golden sunrise.

The foreground is covered with thousands of graves. Just beyond the wall you can see the Temple Mount with the golden Dome of the Rock, which marks the site where Abraham came to offer Isaac as a sacrifice on ancient Mount Moriah.

We knew this photograph was a gift. We reflected upon the Savior’s words: “O Jerusalem, Jerusalem, thou that killest the prophets, and stonest them which are sent unto thee, how often would I have gathered thy children together, even as a hen gathereth her chickens under her wings, and ye would not!”

Because of the combination of intense clouds and dramatic sky, together with the immense golden city, this photograph is again offered both in a beautiful horizontal panorama  and a stunning vertical.