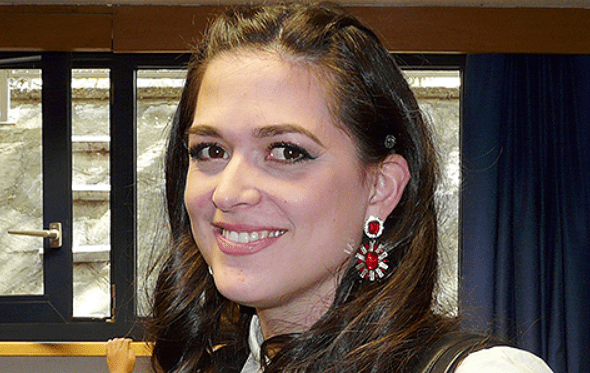 One Woman’s Mission: To Bring the Gospel to People with Hearing Impairment

When she was born at 28 weeks gestation, no one expected Luciana Adele Föger to live. Doctors removed part of a tiny lung and put her on a breathing machine. Her parents prayed. She had to be resuscitated three times over the next few weeks.

When she survived to toddlerhood and beyond, it was suggested to her parents that she couldn’t hear and could certainly never be expected to speak, hold a job, or lead a normal life. In fact, she had a profound hearing impairment, and the little hearing she did have would deteriorate steadily as she got older.

Now 28, Föger can hear and speak both German and English and has a full-time job in the cosmetics industry. She’s engaged to be married next year. And she’s a returned missionary who’s paving the way for the gospel to be taught in German Sign Language.

The daughter of a mother who had served a full-time mission and a father who had converted from a strong Catholic family, Sister Föger’s desire was to serve a mission when she turned 21. Yet, she couldn’t imagine how she could do that with her impairment; she had already rejected the idea of a cochlear implant at age 16.

The surgically implanted electronic device provides a sense of sound to a deaf person by stimulating the auditory nerve. Although cochlear implants had already proven a benefit to many, Föger wanted no part of it as a teenager.

After all, she’d done OK with less than 10 percent hearing ability, attending a school for the deaf in Munich, Germany, and learning to speak German with the help of speech therapy and a lot of one-on-one work with her mother to learn complicated German grammar. One of four children, Föger had even taken piano lessons and learned to match up the notes on the page with the keys on the piano, although she never really knew how it sounded.

Please note: The auditory nerve is not "severed". The wires from the cochlear implant lay on the auditory nerve to stimulate it. If the auditory nerve was severed, a person would have difficulty hearing with the implant. The only thing that it affects are the hair cells which are already being destroyed in a sensorineural hearing loss.