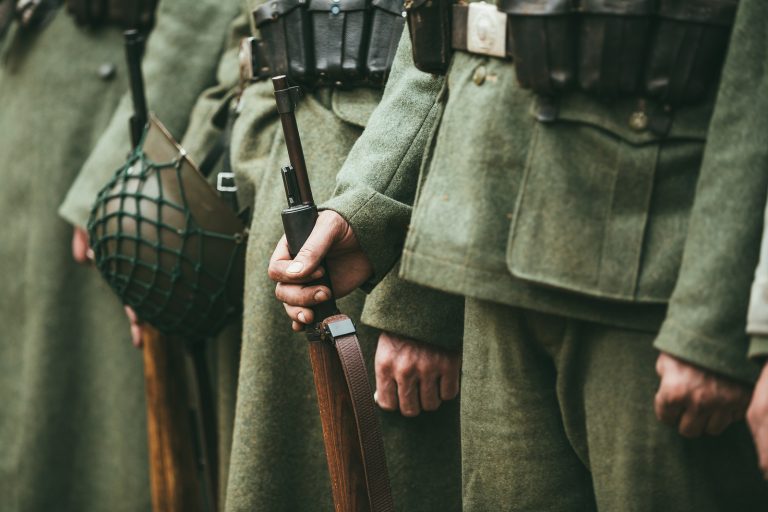 Maria looked out the back of the truck as they traveled along through the darkness. She looked at the German soldier resolutely holding his gun in the ready position. As she considered what lay ahead, her mind turned back to many years previous at the grade-school playground. She was only six and had been playing with some girls when she noticed another girl their age. The girl’s blond hair fell loose over her tired blouse.

Maria pointed to the girl. “I’m going to ask her to play with us.”

The other girls laughed. “Are you crazy? No one wants her.”

“That’s exactly it,” Maria said. “And she needs friends, too.”

Maria was the most popular girl in first grade, and the other girls didn’t argue. Maria learned the girl’s name was Helga, and Maria soon had her playing with them. But at lunch time, Maria saw Helga go off by herself. Maria watched her and realized she had nothing to eat.

From then on Maria shared her lunch with Helga every day, and Helga became one of Maria’s best friends. Maria told her father about Helga, and her father, a good man, searched to learn more. One night, to Maria’s surprise, her father came into the kitchen followed by Helga’s family. Besides Helga, there was her mother, her father, and two older brothers.

It was a phrase Maria heard him often say, as over the years the two families became close friends. Helga’s father rebuilt his company, and Maria’s father prospered from the investment. But then the Nazis rose to power.

“Maria, it’s not safe for Jewish families like ours,” her father said one day. “We’re sending you to France to go to college.”

Away at school, Maria was homesick. But when she found out that Jews were being rounded up in Germany, she feared for her family. Her last letter from her father told her to cease communication and to protect herself. She hadn’t heard from her family since. She didn’t know if they were safe or not. Then the war came to France, and the Germans started rounding up Jews there.

Her thoughts came back to the present, and she looked at the German soldier. The image of Helga’s brothers came to her, and she felt bitterness toward Helga’s family. She and the other Jewish girls from her college had been taken in the middle of the night. They had ridden for a day in the cattle car of a train and then loaded into this truck. When they stopped at a check point, she heard the driver tell the guard the truck had “Jewish workers.”

Maria had heard that the Jews were better off dead than doing slave work. The thought made her hatred for Helga’s family continue to grow. Suddenly, the truck stopped, and she wondered where they were. The soldier ordered them out of the truck. It was the middle of the night with no moon. The darkness was thick around them. In the darkness, a lantern was held in front of her face, blinding her. Then a voice she recognized yelled, “It’s her! We finally found her!”

It was Helga. Maria quickly found herself enveloped in Helga’s arms.

To Maria’s tearful query, Helga laughed. “Father uses the company as an excuse for Jewish workers, then sends them to England. The boat is waiting for you and your friends.” She handed Maria a paper. “Here’s the address where you will find your family.”

When the German soldier escorted Maria to the waiting boat, she realized he actually was Helga’s brother.

As Helga’s father hugged Maria before helping her into the boat, the bitterness left her when she heard him say, “No good deed goes unrewarded.”

We never know when our kindness will be returned to us many times over.

Wonderful story, it is based on fact?