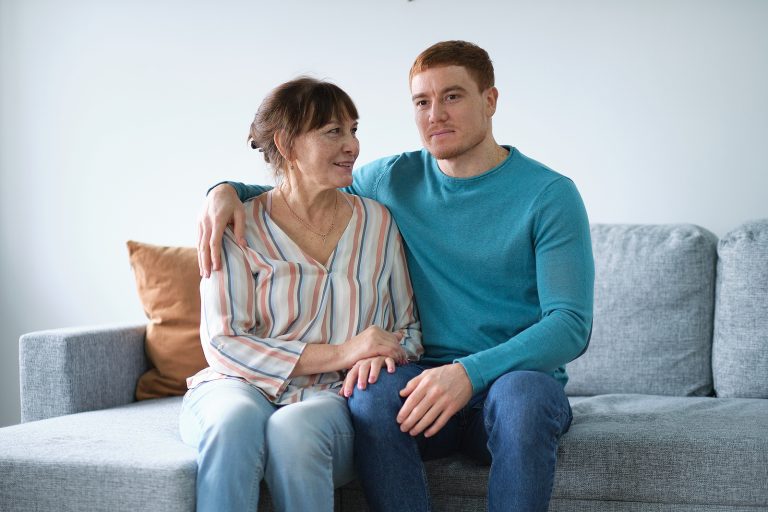 My Son Trembled When He Told Me He No Longer Believed

Sunday afternoons are quiet around here. Once church and lunch are over you can be sure that most of the household will be napping. On one such afternoon, my husband and two youngest daughters were asleep when my oldest son, Nick,* showed up. Though he had lived on his own for several years, he always made time to come over when the whole family gathered for Sunday dinner. He leaned over to hug me where I was curled up on the loveseat with my scriptures.

After chatting softly for several minutes, I felt a sudden impulse to ask Nick if he’d attended church. He was dressed in Sunday best, so the answer seemed obvious, but when I asked the question, he paused a moment, then replied, “No… I’m not sure I believe any more.” A hot, sick feeling washed over me, though I tried not to show it outwardly. For a woman whose life revolves around God and family, nothing could have hurt more than to hear that my child was questioning a lifetime of spiritual teachings.

A long and painful conversation followed, with me occasionally whispering questions–struggling not to weep openly–and Nick gradually spilling out feelings that had weighed on him for years. He hadn’t wanted to rock the boat in our religious family, so he’d held his skepticism inside. He’d been worried about our response, fearful that he wouldn’t fit in with the family if he turned aside from our beliefs–that everything would change.

Eventually we heard faint stirrings of life in the house as people roused from their naps, so Nick and I ended our life-shifting conversation. As we stood, he wrapped me in a tight hug, squeezing me for a long, emotional moment. It was then that I felt him tremble, and realized how much it had cost him to open his heart so completely–to risk weakening his connection to the family. And it was then that I understood that anything we could do to preserve a relationship with this precious son and brother would be worth the effort. With a lump in my throat, I assured Nick that our love was not dependent on everyone believing the same way.

I won’t pretend that I wasn’t devasted. As the rest of the family arrived for dinner, I pasted on a shaky half-smile and finished food preparations. But my appetite was gone. I slipped away during the meal to release the tears I could no longer hold in, grieving Nick’s spiritual shift.

Later that evening, as my husband and I prepared for bed, I shared with him all that Nick and I had discussed. My first inclination was to go on the offensive, to make sure that whenever we spent time with our son we would discuss the gospel in order to answer his questions and concerns. My husband had a better response. He said, “If we preach to Nick every time he walks through our door, he will eventually stop coming home.” I had to admit that my husband was right. Our son didn’t need preaching, he needed unconditional love.

The next several weeks were uncomfortable for me any time I was with Nick. He didn’t act any differently than he always had, but I was hyper aware of any “churchy” comments I–or any other family members–made in his presence. I stopped talking about my work in the temple, ministering, and other church callings, even though those activities filled the majority of my days. I grew tense any time my other children brought up church related topics during Sunday dinner.

Fortunately, it didn’t take long to realize that Nick did not expect us to tiptoe around him. He knew that our lives were centered around the church and the gospel, and he was not offended when we spoke of those things. This was especially important to me since my two youngest daughters were still teenagers, and I didn’t want them to be cheated out of gospel conversations. They needed to be able to ask their own spiritual questions. They needed to hear about the ways their family members were involved in church callings and mission service, and how they saw God’s hand in their lives.

It was helpful for me to recall an experience many years before when someone I loved dearly had stopped participating in the church. My heart was weighed down, worried about his happiness and salvation. Months later, after much sincere prayer, I felt the Lord speak to my heart, telling me that the plan of salvation was not dependent on me. I felt a strong impression that although the path my loved one had taken might look different than the one I was on, he would learn essential lessons along the way, and continue progressing. Most of all, I was reminded that God was aware of him in a very intimate way. I have gradually learned to trust that these same truths also apply to my son.

In the years since I learned of Nick’s spiritual struggles, I have watched him closely. He is a tender husband, a patient uncle, and is remarkably thoughtful of his parents and siblings. Though I claim to be the religious one, in many ways my son is more Christlike than I am. Although many of our standards, activities, and opinions differ, Nick is an honorable man and I am proud of him.

In some respects, I’m grateful for my son’s crisis of faith. His spiritual questioning led me to examine my own faith more closely, resulting in a strengthened testimony. I believe our lives are divinely intertwined, and that we are both learning lessons from his struggles. Over the years I have turned to God much more often because of Nick’s situation. I have been compelled to be humble, to acknowledge that agency is more than just a Sunday school lesson topic. It is a vital component of God’s plan–even when it means that my adult child can make choices I disagree with. This has been a difficult lesson for me.

Weeks after my initial conversation with Nick, I sat in the Celestial room of the temple for a long, long time. My prayers were all for my son. Gradually, I felt the faintest whisper that Nick would eventually return to his gospel roots. However, no timetable was given. Would it be months or years before he came back? Might it even take decades?

Even now, it’s painful to think about my initial discussion with my son, for I sense that something powerful is missing from his life. But in the years since that heart-wrenching Sunday afternoon, I need only recall Nick’s intense, trembling hug, and I’m more convinced than ever that maintaining family unity is far more important than fretting about our differences.

Please know you are not alone. Thousands of us are experiencing the sorrow of having our children decide to leave the church. It broke our hearts when my son took this course, but we continue to pray for him and I know that the prayers of parents for their children are very powerful. I also pray for him when I attend the temple. I believe the Lord will keep calling after his children, and when I am sorrowful I can find some peace by trusting Him.

I was reminded again recently by a brother in his Sacrament meeting talk, that we are not here 'to fix' people but to love them and never give up hope.