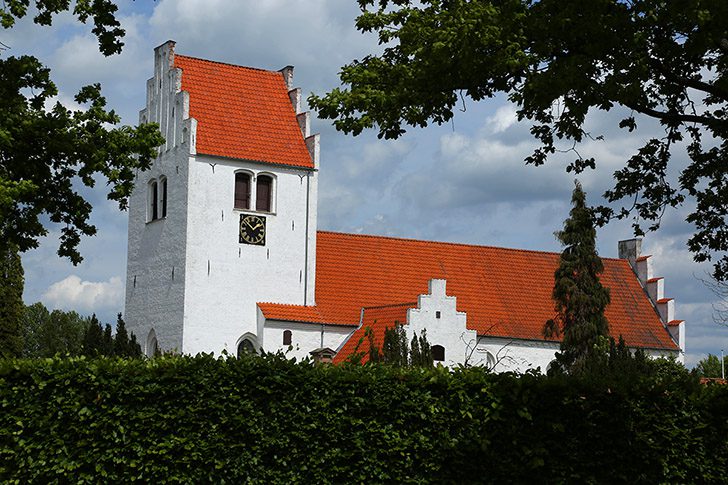 My Hansen Family in Denmark: A Trial by Fire

I’m very drawn to places where my people have been deep rooted—where they lived for generations—and so curious about what made them leave. That curiosity drew us to three tightly-placed little villages in Denmark in late May of 2015—Hvedstrup, Herringløse and Sengeløse. My Danish forbears had been farming here for 207 years where at least six generations had lived and died.

Their farm was between the villages in the most beautiful, almost fairytale-like setting. Lilac bushes bloomed over picket fences. A small pond graced the woods. None of the villages were more than three miles from each other. The neighbor’s children grew up together, known from birth. They swapped stories over the fences. What a setting of utter tranquility!

I grew up with what was to me a sacred story about my great-great grandparents, Peder Hansen and Annie Nielsen. I felt so blessed to go back here to step foot in these places and see where their home had been. Maurine and Mariah were with me—and, of course, these were Mariah’s third great grandparents we were researching.

Denmark is one of the flattest countries in the world. I hadn’t known that. It juts out like a giant wave from the top of Germany, with multiple islands and peninsulas into the cold and windy North Sea. Because the wind is so steady and so fierce in Denmark, they have created one of the largest series of wind farms for electricity on the continent of Europe. The wind would play a role in our story.

The year was 1850 and Peder and Annie would welcome their second daughter into their home: Ane, named after her mother. Ane was their fourth child, but third to live past infancy. She was a beautiful, blondish red-haired Dane, with a bright face and an indomitable spirit. Ane was christened in their local Lutheran church where they regularly attended.

The basin is still there where the children were all christened. Above it hangs a finely-crafted model ship, just like in most of these old churches, with its bow facing directly to a painting of Christ—a symbol of the exactness of mind that leads in a straight course to Christ: Set your sails and steady as you go through life back into the safety of the arms of Jesus. These are seafarers. That symbol was not lost on any.

Two more daughters were born in the next five years, Carrie, and then my great grandmother, Emma Maren Hansen. This household was happy except there was something missing. By the time Ane reached two years old, it was clear that she was not going to be able to walk. Though she was a bright spirit, she was crippled (as they called her in their record). But as she grew her spirit seemed to be brighter and brighter. Ane’s disadvantage was not the thing that was missing.

The Hansens had a neat farm with a lovely farmhouse. The roof was thatched like all the other homes in the area. The barn was sufficient to care for all their livestock and had storage for their bounteous harvests.

Every day the family would place Ane in a chair near the window so she could watch the other members of the family playing and working in the lush fields nearby. Little 8-year-old Ane was impressed that she would some day walk. She began to tell her mother that she would be able to walk and that there would be two men who would come and make her walk. The family had no idea what this hope was from their Ane, and it only caused the family to tease her. They knew the reality was that she would never be able to walk.

One day in 1856, she was sitting by the window as usual when she called excitedly, “Mother! Mother! Here they come, here they come!” My great-great grandmother, Annie, wondering who was coming, went to the window and saw two men dressed in black suits walking along the path toward the house. They were strangers and had not been seen in the area before. As the two men reached the door to knock, little crippled Ane slipped down from her chair and opened the door. These were the very first steps she had ever taken in her life! These two men, of course, were Mormon missionaries that had come to that area to preach the restored gospel of Jesus Christ as had been revealed through the Prophet Joseph Smith.

In the account from my great grandmother she recorded: “Had you been a member of that family at that time what would have been your reaction? Would you have sent the Elders away or would you invite them in and listen to their message?” The Hansen family did invite them in, made them comfortable, fed them and showed their appreciation for the blessing that they had brought to their home. The family joyously received the gospel and all joined the Church.

Word spread into the villages of the miracle of Ane’s healing. These farming families had known each other as neighbors and friends for more than 200 years. Was there rejoicing among them? There was not. There was a saying in the early days of the missionary work in Denmark: “Join the Church and get your windows broken.” But it was not to be so. Broken windows could have been mended.

Not three years had passed and animosity against the Church had grown in Sengeløse beyond what the Hansens could have imagined. They now had six living children, including an eight-month old baby, Niels Peter. Around the end of October, the Saints were gathering for a conference in Copenhagen about 22 miles away by wagon.

The round-trip journey would take them three days. They packed a number of warm blankets into their wagon, some root vegetables, some recently canned jam, and a few large loaves of fresh-baked bread from Annie’s oven. The children were bundled into coats, they took their precious copies of The Book of Mormon and their Bible and off they went.

When they returned along the familiar road that their forefathers had come along hundreds of times and made the final turn, they could not believe their eyes. Their home and outbuildings had been burned to the ground, their crops were trampled and destroyed and all their livestock had been scattered. One eyewitness saw them as they arrived at their farm. He said, “While the Hansen family had gone away for a few days, the townspeople, including my parents, burned the Hansen farm because they were Mormons. When the family came home and saw their farm destroyed, they did not get out of their carriage. They just looked for a few minutes and then drove away and left town.” That Danish wind had whipped the flames to utter destruction of my grandparents’ home.

The Hansens would leave Denmark and finally make their way to Florence, Nebraska. Here they joined with the Samuel A. Woolley Company and departed July 13, 1861 to make the trek across the plains. Ane Hansen, not quite 11, would walk the entire journey. Their first child born in the valley would be named Joseph, after the Prophet Joseph.

It was a Sunday when Maurine and Mariah and I visited the little village of Sengeløse. I had read and reread the story of the Hansens. This was a peaceful town. We were sure that no one knew the story by this time and the lovely Danes who lived here were just living out their lives as they had done for generations. But something happened to make it all come home to us.

We entered the Church where our own ancestors had attended prior to 1856. It was the standard, charming white stucco edifice with lovely art pieces and polished pews inside. But it was Sunday afternoon and the local choir was practicing for a concert that evening. We quietly sat down to listen. The music was familiar to us. It was Christ-centered. It was from Mozart and sung in Latin:

Hail, true body
Born of the Virgin Mary,
Who truly suffered, sacrificed
On the Cross for man,
Whose pierced side overflowed
With water and blood,
Be for us a foretaste
In the test of death.

As we listened to this transcendent music, Maurine and I had the same scene enter our minds at the same time. We were watching in our minds’ eye as the Hansens had been returning from Copenhagen. We saw neighbors and dear friends who had known the Hansens for generations. With the choir practicing we could see an earlier time when the people of this quaint village rolled oil-soaked burlap around poles and headed towards our grandparents’ farm.

We saw them lighting the torches. We saw them looking at each other, filled with hatred for our people and their “heresy” in joining a strange American Church, and then they tossed their torches into the thatched roof and into the haystacks. We saw hand-made rag rugs burning that had been so carefully crafted. We saw walls alive in flame. We saw them tear down the fences and scatter the livestock. These were our grandparents’ long-time friends and neighbors. No strangers. It was like a movie being played before both of us.

It came to us that the ancestors of these very people before us were likely the ones that drove our people from the village. We did not feel animosity of any kind, nor, of course, did they know of the event. Instead, we were feeling the Spirit. We were being filled to overflowing with gratitude for the courage and strength of our ancestors. We had tears of joy because of their decision to follow this path that through their real trial of fire, would lead them across an ocean and a continent to settle in a barren desert and stay faithful to the gospel they had embraced.

The story I had known from childhood was now embedded in my soul.

Thank you for sharing this great story. It caused me to again wonder about the circumstances that led my ancestors to leave Denmark and come to a rather forbidding desert. As far as I know there is no written record of what happened but we can imagine that they too were not accepted in their communities when they joined the Church. How grateful I am for their faith and steadfastness to their convictions.

As a convert of 50 years, l had never heard of any family connection with the Mormon Church, until, doing my family history,, l was led to find that my great great grandmother's two brothers in Denmark had joined the church in 1850 and, facing the same antagonism, left for Zion ("rejse til Zion") with their families on a nine month journey. What a blessing to know of their faith and courage......