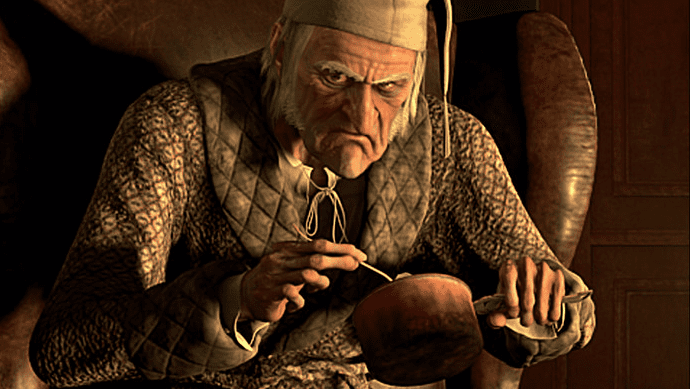 All of this fall people have asked me why I looked like I do, so let me explain.

My two youngest daughters wanted to try out for the local production of A Christmas Carol, so I joined them for some father-daughter time. We filled out the audition papers, and one question asked what part we would consider playing. I put that I would be happy with no part at all and could just work on my next book while I waited for my daughters. But, I wrote, if they had a small part that needed to be filled, I would help out.

They asked me to read the part for Scrooge, and I did. Later that evening they called and asked me to come for callbacks. I did, and the next day I received an email asking me to take that part.

I had to consider it for a while. I had just had knee replacement surgery, and besides spending lots of time in therapy, I was still in a lot of pain. Also, I had extra work at the university and was also trying to prepare my next book for publication. As I took the few days allotted for me to respond, one of the people in charge said they hoped I would take the part because Scrooge needed to be mean, and I was the only one who acted mean enough. I wasn’t sure if that was a compliment or not, but I did decide to take the part.

Once I had accepted, I was asked if I could grow mutton chops for it. For those who don’t know, chops are long sideburns to the chin. Because I work at a religious university with a dress and grooming code in which chops are not allowed, it took a little time to get permission. But within two weeks, the chops had come in thick, I felt that I already looked really stupid, and I still had months to go.

I teach music to the children at the church I attend, and they hadn’t seen me for those two weeks, so they were curious as to why I looked like I did. “Well,” I joked, “I am in a play, and back in that time period, men would compete to see how ugly they could get.”

One darling little four-year-old excitedly worked to get my attention. When I called on her, she spoke enthusiastically. “You are doing a good job. I think you’re going to win.”

My students at the college started calling me Wolverine, and I didn’t even know what that meant until one of them brought me a picture from X-Men.

One Sunday afternoon I lay down for a nap. In the middle of it, a fly landed on my newly grown whiskers. In my sleep, I reached up to swat it away. In doing so my hand brushed my new facial hair, and, in my sleepy state, I thought some kind of caterpillar was crawling on my face. I grabbed it and pulled, and the pain brought me completely out of my sleep.

When my daughter and her children came to visit from California, my three-year-old grandson looked at me and said, “Grandpa, you look . . . ” He paused, so I filled in.

When my twenty-two-year-old son came home from college for Thanksgiving, he looked at me and just started laughing, unable to talk. People that I know and say hi to just stare at me. Others, knowing where I work, ask if I have retired. Seriously, I’m not that old.

And today, I went to pick up my daughter. She was at an after-school activity. I parked the van and went in to tell her I was ready to go home. I finally found a group in the cafeteria that looked like it might be hers. As I approached them, one girl in the group turned and stared at me. She then turned back to the others and whispered, “Don’t look now, but there is a really creepy guy here.” My daughter poked her head up above the group, saw me, and called out, “Hi, Dad.”

But I’m a grown man, so why would looking like this bother me? I mean, I only have thirteen days, five hours, and twenty minutes until the end of the last performance when I can shave my chops off, but who’s counting?

All these people who are creeped out by your mutton chops better not move to Oregon. In my little ward, nearly every one of us over 50 have mutton chops or beards unless we're temple workers or stake leaders. The bishop has a few years until he has to make that decision.

What no picture of your chops? I was looking forward to it