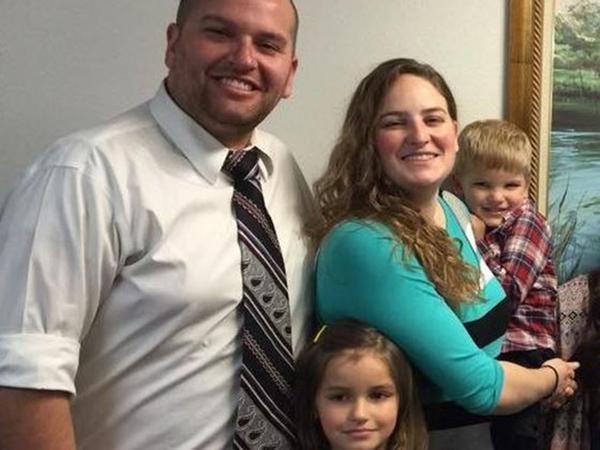 Monday’s death of a 29-year-old mother of two provided a tragic tale of caution to the early part of trek season, when thousands of LDS teens around the world re-enact the Mormon pioneer exodus west.

Meaghan Lee Querry Blair of Rogers, Arkansas, suffered heat stroke symptoms near the end of a seven-mile hike through 95-degree heat Monday, the first day of the trek. She received immediate care and was transported by helicopter to a hospital in Tulsa, Oklahoma, where she died.

“We express our love and deepest sympathies to the family of Meaghan Blair,” said Deborah Neria, spokeswoman for the Rogers Arkansas Stake of The Church of Jesus Christ of Latter-day Saints. “This is a heartbreaking loss for the family and all who knew her. Meaghan leaves behind a husband, Michael, and two young children.”

Blair and her husband Michael were serving as a “ma” and “pa” for a “family” of teens on the trek. Trek groups typically wear pioneer-era clothing, pull handcarts and discuss the sacrifices made by mid-1800s handcart pioneers who walked across the American plains to Utah.

Stake leaders, including Blair’s father, took precautions against the heat at church-owned property near Pawhuska, Oklahoma, a local spokeswoman said.

The stake president, Greg Chandler, and one of his counselors, Brad Querry, who is Blair’s father, nicknamed themselves “Headache” and “Nausea” to remind the group of the symptoms of dehydration, according to a pre-trek Facebook post by Chandler’s wife, Valerie.

The trek also included a doctor and two registered nurses.

So sorry this happened. This is such a fun event. We did some years ago in our country and we had a really good time and we had people fall and cut themselves. We all learnt so much and the day was filled with exoeriences. So sad to hear of this. Please send our blessing from a far. We not there but we can morn with you. Be strong DAD the children will need to understand

The comment by Ken said:"I realize that hindsight is an exact science, but 7 MILES??!! In the heat?? "I completely agree.All you forgot to mention was the HUMIDITY.Which makes it suffocatingly worse. Just a senseless tragedy.