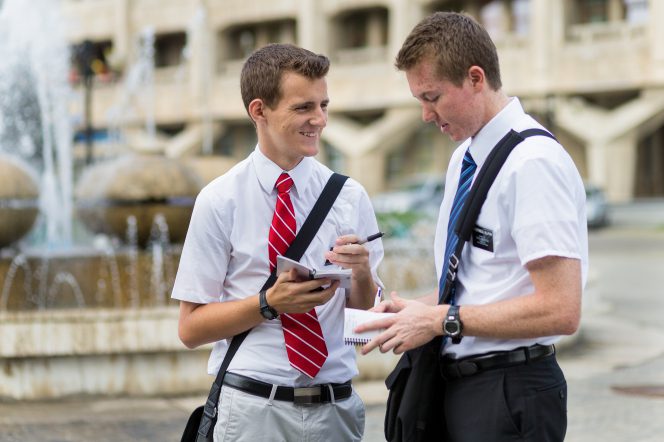 The following was written by Kerry Harding for the “Missionary Moment” column curated by Mark Albright.

Quite some time ago, I was deplaning at the Salt Lake City Airport and, as I went down the escalator to leave the terminal, saw a large group of people—somewhere between 20 and 30—waiting outside the security gate.  A line of children of various ages held a banner, roughly 3’ x 20’, which said, “Welcome Home, Elder Dennis Green: Albuquerque, New Mexico Mission.  Returning with Honor.”

Though I was in somewhat of a hurry to pick up my rental car, I stopped and waited to be a silent witness to what would undoubtedly be a joyous homecoming.  I waited and waited and, after about 15 minutes, was about to give up and leave when I noticed a young man with a missionary name tag coming down the escalator behind the waiting group.

He walked up quietly behind them and peered ahead trying to figure out what everyone else was looking at.  A boy to his left, around the age of seven or eight, looked up to see who was standing so close.  With a loud shout of “It’s him! It’s him,” the boy leaped into the air and threw his arms around the elder’s neck while the rest of the waiting crowd turned and swarmed around him with hugs and tears.  The group holding the banner struggled to turn it around so the Elder could see it in its entirety.

A week later, as I sat in the terminal waiting to leave Salt Lake, I watched with great interest as a band of 14 elders, freshly minted from the MTC, waited to board the flight that would carry them to the mission that was so eagerly awaiting their arrival—Boston, Massachusetts.

They were talking among themselves—laughing, joking and sharing stories—when the gate agent announced that it was time to board.  All traces of lightheartedness suddenly left their faces and was replaced with such an expression of intensity that they each looked like, as they saying goes, “a man with a mission,” because they all were, indeed, exactly that.

On the flight home, I sat next to a second year law student from Harvard who had been one of the early LDS missionaries into Estonia, such an obscure country at the time that, when his call came, he had to pull out an atlas to find out that it was one of the Baltic States and not an African nation.

He talked of the struggles of bringing the Gospel to the former communist nation where most of the people he encountered had little knowledge of or interest in organized religion.

He talked of the times when he spent day after day, week after week, knocking on doors, standing on street corners, and even exploring public plazas and parks looking for anyone who was willing to let him talk to them for just a few minutes, let alone someone who would actually invite him and his companion into their home to listen to one of the lessons.

While he felt he had had little success on his mission at the time, the three families that had accepted the Gospel while he was there found the quality of their lives was dramatically different from those around them, in spite of their similar circumstances.

What made the difference in this young Elder’s most challenging of missions? Diligence.  Faith.  Optimism.

Through the month of August, it has been easy for us to get discouraged at the lack of visible progress on the missionary front.  Not many visitors coming to church.  Not many people to teach.  Not many people to find.  It reminds me of that old B.J. Thomas song, “I think I’m going crazy, everybody’s out of town… there’s no one to be found.”

Well, those days are now over; the daze created of methodically plodding along from house to house, trying to find people to pray-invite-serve should soon subside.

I don’t think the “back-to-school” mentality ever really leaves our system, no matter how old we get.  The desire to try new things, to feel that we are progressing in some way, to discard old possessions and habits—for many, the Labor Day weekend is a more important time for this than is the New Year with its accompanying resolutions.

Somehow, we have forgotten along the way, how easy it is to be involved in the work.  Pray…invite…serve….three easy, non-threatening activities that work in a number of venues and situations.  Are they constantly at the forefront of our minds in the activities and circumstances that make up our daily routines?  Or, as member missionaries, do we have a few major initiatives that involve only a couple of people each year and may or may not work out?

In just a few days it is Labor Day.  Many of you will carry out activities designed to be one last hurrah of summer—hold a cookout in your backyard, have a pool party in your own or a neighborhood pool, go to a local farm to pick fruit, go on a bike ride or hike.

Whatever it is you plan to do with this day, will you also find a way to labor for the Lord at the same time?  Will you invite a non-member friend to join your family in some way—help them clean out their garage, wash their cars, weed a garden or something more creative?

As the old hymn days, “Let all men work, let no one shirk, put your shoulder to the wheel”  Sunday, as you break your Fast, go to the Lord in prayer and ask His advice and guidance on what He would have you do to advance His work tomorrow, Labor Day.