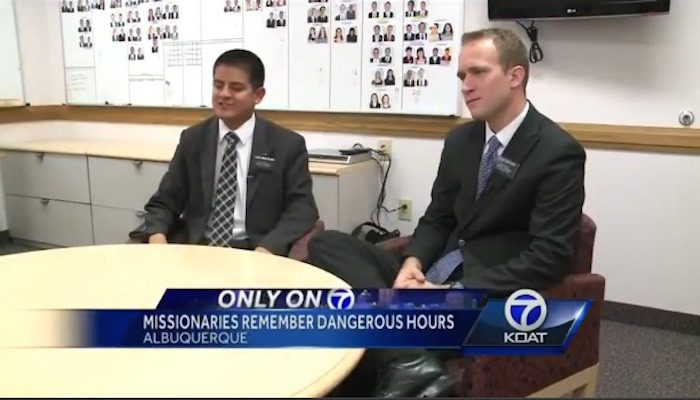 “The Spirit really comforted us,” one of the missionaries, Elder Whitaker said. “Really what we did at that point was just try to calm him down.”

According to LDS Living, “Elders Zuniga Delgado and Michael Whitaker met with a potential investigator in his home last week, where the man refused to let the two missionaries leave, using physical force to keep them in the residence.”

Missionary abductions are more common than many members may think. Movies such as “The Saratov Approach” brought to light this important issue as it recounted the story of two missionaries, Elder Probst and Elder Tuttle, who were held captive in Russia in 1998. The two men were handcuffed in a small room for five days and held at $300,000 ransom. Eventually the Elders were released by their Russian captors and finished their two years of service in reassigned missions before returning home to their families.

With missionaries knocking door to door and hoping to be invited into the homes of strangers, it is no wonder that they run the risk of something like this happening. Elder Whitaker significantly said, however, “In all honesty, it’s those people that we are trying to help out the most.”

So thankful that the Lord knew them and blessed them to be able to love their captor, and to love and reach out to him so that he felt it and responded in an also Christlike way.

During my mission in Spain,1978-80, my companion and I were held "hostage" by a door contact in his home for about 6 hours. He had a loaded gun and threatened to shoot us many times. We could tell he was mentally deranged but after those several hours we were able to escape. In fact, we then went over at the local chapel and attended a wonderful ward party. The Lord watches out for his missionaries.