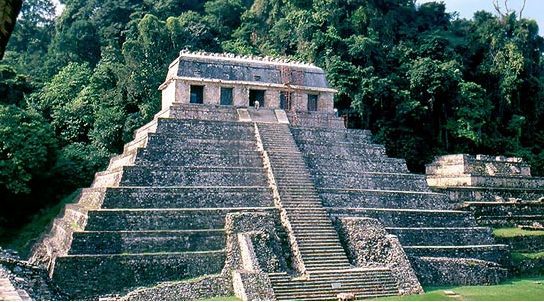 Maya Glyph “And it Came to Pass”: Book of Mormon Literary Style in Mesoamerica

A strange thing about Joseph Smith’s translation of the Book of Mormon plates is the extensive use (over 1500 times) of the phrase “and it came to pass”. Oliver Cowdery recorded Joseph’s translation as a running text without punctuation. When Joseph sent the manuscript to Grandin Press for publication, there was no punctuation. Grandin had to persuade Joseph to let him punctuate the manuscript before printing without altering the text which included the many “and it came to pass” phrases.

When Bruce Warren (1987: 62-64) examined studies of time indicator glyphs by leading Maya hieroglyphic scholars Linda Schele (1982) and David Stuart (1984), he was amazed by a striking Book of Mormon correspondence. J. Eric Thompson (1950: 162-64) first discovered that a posterior Maya date indicator glyph meant “to count forward to”, and an anterior date indicator meant “to count backward to.” An equivalent spoken phrase was not known then in any Maya dialect.

Dr. Warren then illustrated the several striking Book of Mormon correspondence types that match Maya texts at Palenque, Chiapas, Mexico from Schele’s study (1982: 68-69); see figures below: Temple of Inscriptions panel section, Palenque, with glyph variants for “it came to pass”. (from Allen 1989 Fig. 3-4)

And it came to pass that thus passed away the ninety and fifth years also (3 Nephi 2:1)

And it came to pass that the people began to wax strong in wickedness (3 Nephi 2:11)

And it came to pass in the thirteenth year there began to be wars (3 Nephi 2:4)

And thus did pass away the ninety and sixth year (3 Nephi 2:4)

And it had come to pass, yea, all things, every whit, according to the words of the prophets (3 Nephi 1:20)

And six hundred and nine years had passed away since Lehi left Jerusalem (3 Nephi 2:6) (This combined date and event indicator has not yet been noted in Maya texts. See Joseph Allen, 1989, p. 31-34 for additional observations.)

Extensive use of “came to pass” and “come to pass” occurs 1476 times in the Book of Mormon, and is rooted in Old Testament Hebrew where it occurs 526 times. It is considered to be unique to Hebrew historic writing. In other words, we can say, as with chiasmic structure, that wherever it is found as a literary convention, there is the imprint of Hebrew influence.  (see editor’s note #2)

So, how did this “Hebrew” literary convention wind up in Maya writing? Did it come from Nephite influence, or an accidental parallel? Isolated parallels do happen, but they are rare. The answer here rests on the whole literary style contained in the Book of Mormon compared to Maya writing in the Popol Vuh. As unnatural parallels multiply in any study, the scale tips from accident toward the cultural connection side. A glance at independent studies of poetic style in the Book of Mormon (#3. Crowell 1992: 12-26) and in the Popol Vuh (#2. Christenson 2003: 42 ff.) show a striking correspondence in at least ten structure types, which tips the scale significantly toward recognizing the Book of Mormon as a Mesoamerican chronicle with a shared cultural heritage origin with the Popol Vuh (from the region of Izapa).

Angela M. Crowell (#3. 1992: 12) states that, “Knowledge of the poetic structure of the Book of Mormon calls attention to the great beauty of its verse and aids our understanding of its message,” in addition to recognizing its ancient Hebrew origin.
Alan J. Christensen’s (#2. 2003: 52) translation of the Popol Vuh recognizes that, “Far from being the random musings of an unlearned story-teller, the Popol Vuh can be appreciated as the eloquent creation of a master poet with a sophisticated literary heritage.”

Is there earlier origin of this poetic structure in Maya hieroglyphic texts? I participated with Schele’s translation workshop at the University of Texas in 1986 and worked on the Palace Tablet dating to the 7th century A.D. During that week I was able to decipher an underlying geometric “chiasmic” composition structure of the text that placed the name of first ancestor, Pacal, of the Palenque dynasty in the exact geometric “chiasmic” center of the panel text. I found other Palenque panels similarly designed. This is a subject for another time. I only mention it here to illustrate the antiquity of Maya writing for Book of Mormon comparison.

A related subject for investigation is, to what degree evolved Nephite Hebrew writing (Mormon 9: 32-34) might be found in Maya hieroglyphic writing. Maya hieroglyphic writing as we know it does not qualify for Nephite writing for locating Book of Mormon history in Maya territory as some have supposed. The origin of the Maya writing system goes back to Olmec-Jaredite times, so we are looking at a long and complex evolved history of a particular writing development that was manifested in a variety of regional hieroglyphic systems in Mexico, Guatemala, Veracruz,  and elsewhere during the Late Preclassic era before the Classic Maya system became fully formalized in the third century A.D. This would tie more directly to historic Lamanite culture, but in a generation when Lamanite and Nephite cultures had merged.

There was a mistake in the original Allen research about the spelling of the David Stuart translation of “it came to pass”.  Ronald Dye, a long time BMAF member contacted us with the following valuable correction: “The caption for the picture attributed to Joseph Allen of the Mayan glyph ‘for it came to pass’ {U} T Ch I is incorrect.  It should I U ti. I would refer you to How to Read Mayan Hieroglyphs, by John Montgomery, Hippocreene Books, pp. 117-118 and specifically p. 118, figure 6-14 and related text for The Posterior Date Indicator (PDI) (I ut).

Since the “came to pass” glyph deals with time, we would expect to find it on several glyphs in several locations. Typically during a BMAF Book of Mormon Lands Tour in 2010, we visited the ruins of Cancuen on the Pasion River, right in the middle of Book of Mormon lands. We chanced upon an excellent example of the glyph. Take a picture tour of that trip plus background information on Cancuen and an illustration of the glyph at http://www.bmaf.org/node/512)

I certainly look forward to the day when scripture comes out about God's dealing with the people of Central America, it will be fascinating no doubt. For now I will stick with Book of Mormon scripture that I humbly believe only took place in these the United State, the promised land as the Book of Mormon state over and over again, that does not ever seem to be Central America, thanks for the research however.