Lessons from the Restoration: How God "Fought for the Mormons" | Meridian Magazine 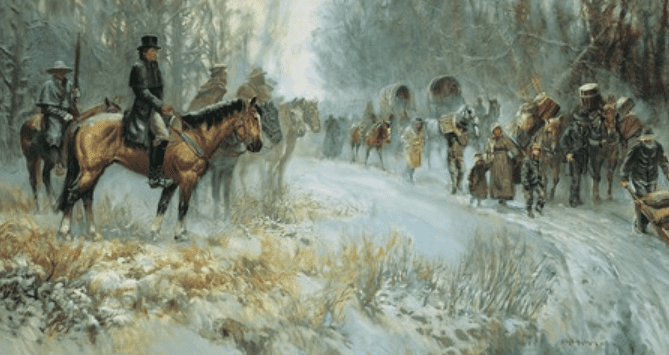 Lessons from the Restoration: How God “Fought for the Mormons”

Most of you will remember that the expulsion of the Saints from Jackson County led to the organization of Zion’s Camp, an effort by determined church members to march to the aid of their brethren in Zion.

The Missourians were warned of their coming and made plans to prevent them from accomplishing their purposes. Among those bitterly opposed to the resident Saints and the advancing army was one James Campbell.

The sole purpose of Joseph and his brethren was to bring succor to their suffering friends; but this their inhuman enemies were determined they should not do. Fifteen of the most violent mobocrats, with Samuel C. Owens and James Campbell at their head started to raise an army to meet and overpower the Camp of Zion. (George Q. Cannon, Life of Joseph Smith the Prophet, p.178-179)

In his bitterness, and while engaged in attempting to raise an army against Zion’s Camp, Campbell swore an oath of such a prophetic nature that it is worth a brief review here.

Campbell swore, as he adjusted his pistols in his holsters, “The eagles and turkey buzzards shall eat my flesh if I do not fix Joe Smith and his army so that their skins will not hold shucks, before two days are passed.” They went to the ferry and undertook to cross the Missouri river after dusk, and the angel of God saw fit to sink the boat about the middle of the river, and seven out of twelve that attempted to cross, were drowned. Thus, suddenly and justly, went they to their own place.

Campbell was among the missing. He floated down the river some four or five miles, and lodged upon a pile of drift wood, where the eagles, buzzards, ravens, crows, and wild animals ate his flesh from his bones, to fulfill his own words, and left him a horrible example of God’s vengeance. He was discovered about three weeks after by one Mr. Purtle. Owens saved his life only, after floating four miles down the stream, where he lodged upon an island; he swam off naked about day light, borrowed a mantle to hide his shame, and slipped home rather shy of the vengeance of God.” (History of the Church, Vol.2, Ch.7, p.99)

On the morning of the 19th of June [1834], the Prophet feeling that [Zion’s Camp was] in an unsafe place, commanded that the camp move forward without delay. They passed through Richmond, [Missouri] where a black woman called to Luke Johnson. He went to hear what she had to say and she said, “There is a company of men lying in wait here, who are calculating to kill you this morning as you pass through.” The company halted for breakfast and were kindly treated and given milk by a farmer. After their breakfast they attempted to continue their journey, but had not gone far before a wagon broke down, the wheels ran off another, and many incidents occurred to hinder their progress. That night they had traveled only to an elevated piece of ground between Little and Big Fishing rivers. While they were making their camp five men with guns rode into the camp and told them they would “see hell before morning.” This was said with accompanying oaths and blasphemy.

They stated that armed men were gathering from Ray and Clay counties to join those from Jackson, and they had sworn the destruction of the camp. During that day about two hundred men from Jackson County made arrangements to cross the Missouri River near the mouth of Fishing River, and be ready to meet the Richmond mob near the Fishing River ford. After the first scow load of about forty had passed over the river the scow had great difficulty in returning and did not reach the Jackson side until dark.

While this was going on and the five ruffians were in the camp swearing vengeance, wind and thunder and a rising cloud indicated approaching storm. Shortly after it began to rain and hail and the storm increased in intensity. An hour before sundown the mobbers commenced firing a cannon, but when the storm broke they sought shelter under their wagons, in hollow trees and wherever they could hide. Their ammunition became soaked and when morning came they “took the back track for Independence.”

Very little hail fell in the camp. The brethren found shelter in an old meetinghouse while in the camp of the mobbers hailstones and lumps of ice cut down trees and crops and trees were twisted out of shape. The water in Little Fishing River rose thirty feet in that many minutes. It was reported that one mobber was killed by lightning and another had his hand torn off when his horse drew his hand between logs of a corn crib. Some out of this wicked mob said if that was the way God fought for the Mormons, they might as well go about their business. (Joseph Fielding Smith, Church History and Modern Revelation, Vol 3, p.36)