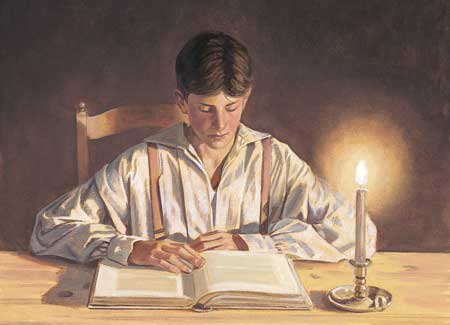 James may be the most important book of scripture for the Restoration.  The now famous passage, “If any of you lack wisdom, let him ask of God,” (James 1:5) set the young Joseph Smith to deep pondering, which led him to follow the simple and pragmatic counsel to inquire of the Lord.  This straightforward, pragmatic approach has long been a noted feature of James, who focused his short epistle on the practical actions and works of the Gospel in contrast to the Pauline writings that lay much emphasis on justification through faith. [1]

Who wrote the epistle of James?  The seemingly obvious answer would be, “why James, of course!”  But, which James?  Some six individual “James” are referred to throughout the New Testament which can be rather confusing and cause us to wonder who wrote this document.  Today, many believe that James the brother of Jesus authored this epistle.  The main reasons for this belief have to do with (1) similarities between the teachings of James in Acts 15 and those of the epistle of James and that (2) James the brother of Jesus is the most prominent among those James’ mentioned in the New Testament; he would not need further introduction than his first name. [2]

James does not date his document and tells us very little about the immediate intended audience of his writing.  He simply states in 1:1 “to the twelve tribes which are scattered abroad,” though in 2:2 we know that his audience assembled at a synagogue which was led by elders (James 5:14).  Some have speculated that the strong themes of social justice such as mercy and compassion for the suffering innocent and poor may reflect the very social situations among many Jewish Christians in and around Jerusalem c. 50 AD.  We remember that in Acts 6 there was a problem in the Church that some widows were being neglected in the daily ministration of support and sustenance.  Additionally, the economic standing of many (including the Christians) in Palestine during the middle decades of the 1st century AD was quite oppressive and restrictive.  Those who had money and especially Roman citizenship had many favors while those who did not were 2nd class citizens at best.  These poor in most cases lacked any power to protect themselves from the rich who lived off their labors, misfortunes, and weaknesses.  So perhaps this document was written in this type of environment.

The epistle is remarkable for the hortatory (exhortation) style that dominates the entire document.  Of the 108 verses of James, 54 of them (½) use imperative/command forms of verbs.  It can stir the heart of even the most hardened hearer to do the works of righteousness.  Here are some examples of the hortatory style using command forms: “Submit yourselves…resist the devil…Draw nigh unto God…cleanse your hands…purify your hearts” (James 4:7-8). [3]

Themes in the Epistle of James

Doers of the Word

One of the most striking features of the epistle of James is the stance, “But be ye doers of the word and not hearers only, deceiving your own selves” (James 1:22).  James powerfully elaborates this pragmatic, simple wisdom in chapter 2 explaining, “Even so faith, it if have not works, is dead, being alone.  Therefore wilt thou know, O vain man, that faith without works is dead and cannot save you?” (JST James 2:17-18). And in case any misunderstand how this principle is applied James has ready and penetrating examples:

“My brothers and sisters, do you with your acts of favoritism really believe in our glorious Lord Jesus Christ?  For if a person with gold rings and in fine clothes comes into your assembly, and if a poor person in dirty clothes also comes in, and if you take notice of the one wearing the fine clothes and say, ‘Have a seat here, please,’ while to the one who is poor you say, ‘Stand there,’ or, ‘Sit at my feet,’ have you not made distinctions among yourselves, and become judges with evil thoughts?”

“You do well if you really fulfill the royal law according to the scripture, ‘You shall love your neighbor as yourself.  But if you show partiality, you commit sin and are convicted by the law as transgressors.  For whoever keeps the whole law but fails in one point has become accountable for all of it.  For the one who said, ‘You shall not commit adultery,’ also said, ‘You shall not murder.’  Now if you do not commit adultery but if you murder, you have become a transgressor of the law.”

“What profit is it, my brethren, for a man to say he hath faith, and hath not works? Can faith save him?james 2:18  Yea, a man may say, I will show thee I have faith without works; but I say, Show me thy faith without works, and I will show thee my faith by my works.james 2:15  For if a brother or sister be naked and destitute, and one of you say, Depart in peace, be warmed and filled; notwithstanding he give not those things which are needful to the body; what profit is your faith unto such?”

James commends the worshipful practice of prayer throughout his epistle.  If we need knowledge or wisdom we can seek the very source of all truth.  Those who petition God with confidence and faith will be richly rewarded (James 1:5).  The story of Joseph Smith is a strong witness for this promise.  If there is sickness James reminds the saints to pray promising that “the prayer of the faith shall save the sick; and the Lord shall raise him up; and if he have committed sins, they shall be forgiven him” (James 5:15).  If there is sin among the saints, then James again encourages prayer for healing and reconciliation “confess your faults one to another, and pray one for another, that ye may be healed.  The effectual fervent prayer of a righteous man availeth much” (James 5:16).  To underscore this principle James cites the story of Elijah, the righteous Old Testament prophet who prayed unto God on behalf of Israel to cause the rain to fall again upon the land after three and a half years of famine.

James has very strong things to say against the rich.  I will not attempt to soften his tone or to explain him away.  Instead each of us can look deeply at our own lives and query whether these stringy words describe us (see especially James 2:1-10; 5:1-6).  His tone toward the poor, on the other hand, is most merciful and promissory comparable to what we hear from Christ at the Sermon on the Mount:

Suffering of the Innocent

Suffering is a fact of mortality and this has been a persistent literary theme for millennia.  Where does suffering come from?  Our own choices can cause us to suffer and the choices of others can cause us to suffer. Ultimately, we alone are responsible for how we deal with suffering whether self-inflicted or caused by others.  Suffering is very real, acutely so for those who innocently struggle under various forms of oppression and injustice.  To these individuals James writes comfortingly (James 5:7-11):

“Be patient therefore, brethren, unto the coming of the Lord. Behold, the husbandman waiteth for the precious fruit of the earth, and hath long patience for it, until he receive the early and latter rain.james 5:8  Be ye also patient; stablish your hearts; for the coming of the Lord draweth nigh.  james 5:9Grudge not one against another, brethren, lest ye be condemned; behold, the judge standeth before the door.james 5:10  Take, my brethren, the prophets, who have spoken in the name of the Lord, for an example of suffering affliction, and of patience.james 5:11  Behold, we count them happy which endure. Ye have heard of the patience of Job, and have seen the end of the Lord; that the Lord is very pitiful, and of tender mercy.”

We all know the evils of gossip, false accusations, lies, deceit and unkind remarks.  James’ pragmatic, yet exceedingly sharp Gospel perspective is quite evident in his exhortations against the follies of a loose tongue.

“The tongue is a small member, yet it boasts of great exploits. How great a forest is set ablaze by a small fire!…. But no one can tame the tongue– a restless evil, full of deadly poison.  With it we bless the Lord and Father, and with it we curse those who are made in the likeness of God.  From the same mouth come blessing and cursing. My brothers and sisters, this ought not to be so.  Does a spring pour forth from the same opening both fresh and brackish water?” (James 3:5, 8-11; NRSV translation)

If we control our tongues James makes a most astounding promise, “If any man offend not in word, the same is a perfect man, and able also to bridle the whole body” (James 3:2).  Do we believe it?  Do we have enough faith to test the word?  Imagine the payoff of such a promise!  If we can bridle our tongue, indeed we will then have power over all other passions and desires that seek to dominate our soul.  “Wherefore, my beloved brethren, let every man be swift to hear, slow to speak, slow to wrath” (James 1:19).

“Now, what do we hear in the gospel which we have received? A voice of gladness! A voice of mercy from heaven; and a voice of truth out of the earth” (D&C 128:19).  The gladness of the gospel is but tinkling cymbals and sounding brass if we neglect the poor, the naked, the hungry, the widow, the fatherless, the friendless, the oppressed, and the forsaken.  “Pure religion and undefiled before God and the Father is this, To visit the fatherless and widows in their affliction, and to keep [yourself] unspotted from the world” (James 1:27).  In this regard, no amount of faith, if not coupled with the power of action, can ever compensate for the living realities of unattended suffering.  James explains this with vivid clarity:

“What doth it profit, my brethren, though a man say he hath faith, and have not works? Can faith save him?  If a brother or sister be naked, and destitute of daily food,  And one of you say unto them, Depart in peace, be ye warmed and filled; notwithstanding ye give them not those things which are needful to the body; what doth it profit?  Even so faith, if it hath not works, is dead, being alone.  Yea, a man may say, Thou hast faith, and I have works: shew me thy faith without thy works, and I will shew thee my faith by my works.”  (James 2:14-18)

Let us press forward in the faith of righteous works, attending to the needs, distresses, and suffering of those children of God all around us.

[3] Perhaps as a study exercise list each of the imperative/command forms that is found throughout the 5 chapters of James.