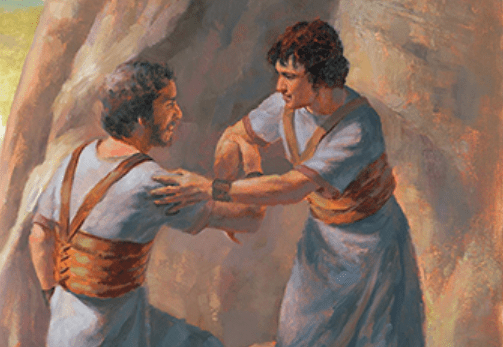 Lesson 23: “The Lord Be Between Thee and Me For Ever”

The real friendships among men are so rare that when they occur they are famous.

The events portrayed in these chapters of 1 Samuel stand as a series of contrasts — and like a diamond photographs more brilliantly against black velvet, so the remarkable friendship of David and Jonathan stands out as a jewel against the dark, jealous rancor of Saul.

David is a golden boy who attracts the admiration and praise of Israel. Indeed, “All Israel and Judah loved David (1 Samuel 16:18). For Saul, who ruled the land, this respect for David, was threatening. Praise for another, in his mind, somehow diminished him and put his position on the line.

For Jonathan, Saul’s son, who would have been a ruler in Israel, David’s popularity could have been just as disturbing, making his own position more fragile. However, Jonathan loved David. Their souls were knit, and their relationship has survived throughout generations as the quintessential example of friendship. The difference between Saul’s and Jonathan’s response to David was in not just the eye, but the heart of the beholder.

It is ironic that Saul could have seen his position as tenuous or wished for more. He was, after all, the king of Israel. God had chosen him. At his command armies moved. He could not have known much more power or influence in the land. Yet, when he heard the women chanting, “Saul hath slain his thousands, and David his ten thousands” (1 Samuel 18:7), he became “wroth,” churned up with jealousy — and from that day forward Saul eyed David with hatred.

It was an anger that quickly turned violent, and we see in these chapters that Saul’s good qualities and even his ability to rule with any wisdom was subverted by this black soul rot that he let consume him. Twice he tries to smite David with a javelin. He sends him into a hot battle against the Philistines, hoping they will kill him. He seeks him by night at his home, and by day with armies. The JST correction to 1 Samuel 19:9 sums up just what possesses Saul, “And the evil spirit which was not of the Lord was upon Saul.”

Armies could not have toppled Saul if he had remained righteous, but instead, he allowed jealousy to overtake his system. Having once succumbed to anger, he enlarged it with action, until it became his life, sucking out every other good instinct. He becomes duplicitous, and eventually even turns his violence upon his own son Jonathan. Where evil is allowed a place in our heart, it can quickly subvert every other good quality.

Elder Jeffrey R. Holland spoke of this green-eyed monster jealousy in the April 2002 conference, using as his example the elder brother of the prodigal son who complained that his brother was receiving so much attention. Elder Holland notes:

Certainly this younger brother had been a prisoner — a prisoner of sin, stupidity, and a pigsty. But the older brother lives in some confinement, too. He has, as yet, been unable to break out of the prison of himself. He is haunted by the green-eyed monster of jealousy.

He feels taken for granted by his father and disenfranchised by his brother, when neither is the case. He has fallen victim to a fictional affront. As such he is like Tantalus of Greek mythology — he is up to his chin in water, but he remains thirsty nevertheless. One who has heretofore presumably been very happy with his life and content with his good fortune suddenly feels very unhappy simply because another has had some good fortune as well.

Who is it that whispers so subtly in our ear that a gift given to another somehow diminishes the blessings we have received? Who makes us feel that if God is smiling on another, then He surely must somehow be frowning on us? You and I both know who does this — it is the father of all lies. It is Lucifer, our common enemy, whose cry down through the corridors of time is always and to everyone, “Give me thine honor.”

It has been said that envy is the one sin to which no one readily confesses, but just how widespread that tendency can be is suggested in the old Danish proverb, “If envy were a fever, all the world would be ill.” The parson in Chaucer’s Canterbury Tales laments it because it is so far-reaching — it can resent anything, including any virtue and talent, and it can be offended by everything, including every goodness and joy.

As others seem to grow larger in our sight, we think we must therefore be smaller. So, unfortunately, we occasionally act that way.

How does this happen, especially when we wish so much that it would not? I think one of the reasons is that every day we see allurements of one kind or another that tell us what we have is not enough. Someone or something is forever telling us we need to be more handsome or more wealthy, more applauded or more admired than we see ourselves as being. We are told we haven’t collected enough possessions or gone to enough fun places. We are bombarded with the message that on the world’s scale of things we have been weighed in the balance and found wanting. Some days it is as if we have been locked in a cubicle of a great and spacious building where the only thing on the TV is a never-ending soap opera entitled Vain Imaginations.

But God does not work this way. The father in this story does not tantalize his children. He does not mercilessly measure them against their neighbors. He doesn’t even compare them with each other. His gestures of compassion toward one do not require a withdrawal or denial of love for the other. He is divinely generous to both of these sons…

One observer has written: “In a world that constantly compares people, ranking them as more or less intelligent, more or less attractive, more or less successful, it is not easy to really believe in a [divine] love that does not do the same. When I hear someone praised,” he says, “it is hard not to think of myself as less praiseworthy; when I read about the goodness and kindness of other people, it is hard not to wonder whether I myself am as good and kind as they; and when I see trophies, rewards, and prizes being handed out to special people, I cannot avoid asking myself why that didn’t happen to me.”

If left unresisted, we can see how this inclination so embellished by the world will ultimately bring a resentful, demeaning view of God and a terribly destructive view of ourselves. Most “thou shalt not” commandments are meant to keep us from hurting others, but I am convinced the commandment not to covet is meant to keep us from hurting ourselves.

Without the faithful friendship of Jonathan, Saul might have succeeded in his devious plots to kill David. The friendship between Jonathan and David was not built on a transitory circumstance or shared, but merely fleeting interests, but on something more. It was a friendship that endured time and pressure, and still shone.

My mother has often stated that the wisest thing she ever did was marry a man who loved the Lord more than her. As a youngster, that statement bothered me since it seemed so incongruous. How could something between two people do other than separate them, make them less close? Yet over the years I have come to see that approach for what it really is, a statement of incredible faith and courage, a sign of great maturity.

Using the word “between” is an interesting commentary. It certainly does seem illogical to say that by putting something or someone between two that they can become closer. However, that is clearly the implication.

Obviously this is something the Israelites understood well; the phrase is often found in the scriptures, most notably the Old Testament. For the term to have become the common idiom that it did demonstrates to us how obvious the lesson was to the Israelites.

Perhaps in our modern English terminology it is simplest to say that “putting the Lord between” us and a friend indicates that we are basing or building that friendship on the foundation of our mutual relationship with God. In the same way that our bonds with our cousins might be built upon the stronger relationship of our parents as siblings, so a friendship nurtured in this world is stronger if founded upon the eternal relationship we have with our Father and his Son.

The implications of this potential friendship are enormous. It demands that we rise above the limits of common friendship and grasp the higher values that the gospel has been teaching us. A friendship in this world usually develops because we share similar backgrounds, interests, goals, abilities, or traits. Yet these can be tenuous, or in a word, temporary, temporal, not eternal.

If instead, we start with the background of having the same eternal parents and the objective of eternal life, the bond is definitely more powerful. If we can move beyond the petty boundaries that eventually seem to plateau friendship in this world and replace envy, jealousy, and strife with faith and charity, we have a chance at forming here on this imperfect earth an eternal relationship.

Can one expect human relationships to be deep and lasting sources of purpose and meaning without having truth at their center? Can there be friendships such as the friendship of Jonathan and David outside the context of absolute values? We read that “Jonathan was knit with the soul of David”; these two individuals “made a covenant.” (See 1 Samuel 18:1-3.)

Friendships formed in the context of floating values are apt to be floating friendships — devoid of real acceptance, depth, and continuity, the very things that friendship is intended to supply in the first place.

When humans are thrown together in more and more temporary relationships in which selfishness is emphasized, in which sensation is sought, we will constantly disappoint each other because we will always be taking. Can we build real friendships without knowing who we are? Strangers may interact at the level of sensation, but not usually at the levels of knowing and loving.(1)”

Dogged by someone who wanted to murder him, David could have succumbed to the same soul-darkness and hatred that Saul had. But even using the excuse of self-defense, he did not. In 1 Samuel 24, when David found Saul asleep in the cave, he could have killed him and apparently ended his woes. David saved Saul because he respected and loved the Lord, saying, “I will not put forth mine hand against my lord; for he is the Lord’s anointed”(1 Samuel 24:10).

Evil can grow like a spot of mold on a rotting apple, but goodness and light have even more ability to spread. A single generous act or a heart in the right place can turn the course. Light a single candle in a room, and the darkness flees. So David’s merciful response to Saul, suddenly awakened the dormant honesty of the wicked leader. Saul confessed to David, “Thou art more righteous than I: for thou hast rewarded me good, whereas I have rewarded thee evil”(1 Samuel 24:17).

It is ironic that the scheming, hand-wringing, self-protecting efforts we sometimes make in the name of shoring up our own superiority or position only serve to subvert us. We learn from Saul Alma’s great lesson that “wickedness never was happiness” (Alma 41:10) and that ultimately self-seeking is isolating and lonely. In contrast, from David and Jonathan we learn that relationships built on a heavenly foundation are one of the rich treasures of eternity.