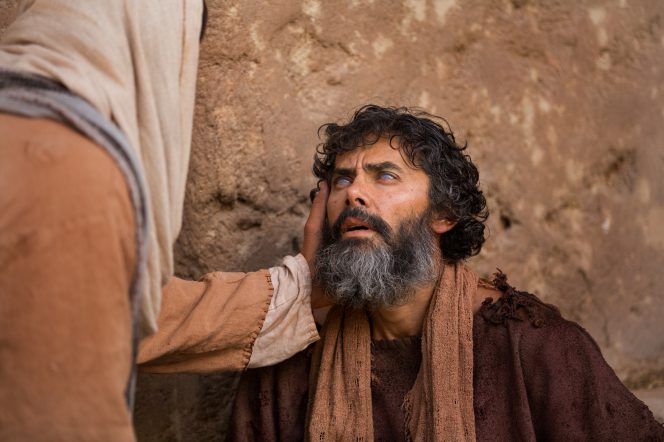 Introduction
John the Beloved’s testimony is full of long and detailed stories and specific experiences from the Savior’s life, all carefully designed to draw us unto Him who is the abundant Giver and the great Healer. Significant is chapter nine of John, the whole of which is the story of the Savior healing a man born blind from birth. What is this chapter really all about?

Jewish Traditions and Jesus’ Touch
“A man blind from birth was begging on the Sabbath, probably on the temple mount, when Jesus’ disciples asked, ‘Master, who did sin, this man, or his parents, that he was born blind?’ It was a typical question for those who had been reared to believe that disease was punishment for sin. A common Jewish view held that even the unrighteous thoughts of a mother might affect the state of her unborn child. Jesus’ answer was thus surprising: ‘Neither hath this man sinned, nor his parents: but that the works of God should be made manifest in him.’ Then the Savior anointed the man’s eyes with clay and asked him to go wash in the nearby pool of Siloam, and the man obeyed and went away with his eyes opened.

“His neighbors, probably accustomed to the familiar sight of the beggar, marveled that the blind now saw, and immediately they went to some Pharisees, who brought the man forward for an inquisition, hoping to find a charge against Christ. The testimony of the man was straightforward: ‘He put clay upon mine eyes, and I washed, and do see.’ The wonder of it could neither be denied nor explained, and in a turn the Pharisaic view was itself on trial. If this Jesus acted by the power of God, then the divinity of their own Sabbath rules, the power of their position itself, was in question. Unthinkable. Next they brought in his parents to verify that the man had indeed been born blind. This they could not deny, but they gave an evasive answer when asked how he had been cured. They knew ‘that if any man did confess that [Jesus] was Christ, he should be put out of the synagogue.’

“Excommunication, depending on the degree, meant a sort of living death for the people. The excommunicant ‘would allow his beard and hair to grow wild and shaggy; he would not bathe, nor anoint himself…As if he were a leper, people would keep at a distance of four cubits from him.’ Even before this threat of the Sanhedrin, the healed man did not cower: ‘If this man were not of God, he could do nothing.'”(1)

The Blind and those who See
The tender and private meeting of the former blind man and the Savior casts further light on the teaching John is trying to communicate to his future readers. The Sanhedrin cast the healed man out, and when Jesus found the man, “he said unto him, Dost thou believe on the Son of God? He answered and said, Who is he, Lord, that I might believe on him? He answered and said unto him, Thou hast both seen him, and it is he that talketh with thee. And he said, Lord, I believe. And he worshipped him” (John 9:35-38). This blind man now not only saw with his own eyes, the very Son of God, but heard Him as well.

“And Jesus said, For judgement I am come into this world, that they which see not might see; and that they which see might be made blind. And some of the Pharisees which were with him heard these words, and said unto him, Are we blind also?” (John 9:39,40) What a telling question! Who is blind? Those who think they see, or those who, having been anointed by the hand of the Lord, are given eyes to see? That day, the blind truly saw, and the sighted Sanhedrin and Pharisees proved blind.

The Good Shepherd and Those who hear His Voice
After having taught about true sight, John the Apostle next began to draw upon the words of the Savior to teach about true hearing. Jesus, knowing intimately the land and setting of His listeners, draws upon the metaphor of a shepherd.

“Burned black in the sun, roaming the rocky hills in every kind of weather, the Middle Eastern shepherd has a tender relationship with his flock. He knows each one; each has a name. If one is stuck in a rocky, mountain crag, he will leave the others to find it, carrying it back, cradled protectively against his body. At night, when creatures roam the desert, hungry for sheep who have no defense against predators, the shepherd protects them in a fold.. A hireling might flee before a wolf, leaving the sheep defenseless, but not the good shepherd. He would even give his life for his sheep. In the morning, he comes to the door of the sheepfold and calls his own sheep by name. Even if it is a common fold where other flocks have been sheltered, his sheep hear his voice and follow him, for they know him. They do not respond to the voice of strangers…

“‘I am the good shepherd,’ said the Lord, ‘and know my sheep…My sheep hear my voice,…and they follow me.’ To His listeners who lived in the land of shepherds, it was a compelling image: ‘The Lord is my shepherd; I shall not want.’ As a lamb, He leads me to green pastures and still waters, to all that is nourishing and protecting. When I am broken, ‘He restoreth my soul.’ Though I walk through the deepest darkness, ‘I will fear no evil: for thou art with me.’ Only because of the good shepherd, ‘goodness and mercy shall follow me all the days of my life.'”(2)

Those who have ears to hear, will indeed hear the voice of the Good Shepherd. And those who have been touched by the Savior will never be blind again.

Other Sheep “Not of this fold”
In a remarkable verse in the tenth chapter of John, the Savior refers to a family who left the land of Jerusalem some six hundred thirty years earlier and became a mighty people upon the American Continent. “And other sheep I have, which are not of this fold: them also I must bring, and they shall hear my voice; and there shall be one fold, and one shepherd” (John 10:16). The Jews did not understand who the Savior was talking about, nor do the modern students of the Bible.

As the Savior was visiting the Nephites some time after his resurrection, he taught them about the Jews’ lack of knowledge of them.

As the Good Shepherd, no matter where His sheep have been led, or where they have been lost, He will find them, and bring them safely back to His fold. “My sheep hear my voice, and I know them, and they follow me” (John 10:27).

My husband was born legally blind virtually from birth. His stepfather thought that he must have done something wrong in a previous life, but we know that it is so that the works of God can be made manifest in him. Every time he is able to serve, even with his physical challenges, it is a testimony of the power of God manifest in his life. Later in life, he developed a cataract. As part of the treatment, a lens was implanted in his eye. His vision improved. It was a "Now I see!" moment. He was amazed by the sight of things like blades of grass and leaves on trees. I thought of the man that Jesus healed, and imagined that he had this same reaction.

I was born with congenital defects. My Uncle's wife had her husband write a letter to my parents that they had sinned and that is why they had a handicapped child. This hurt terribly and they went to their bishop, James Paramore, who later became our Stake Pres. and eventually a member of the 70's. He read John 9 to them to calm them and reassure them. There STILL are people who think this way. They need to understand the beauty of this story and love all people, instead of harboring their fears and practice exclusion of others.