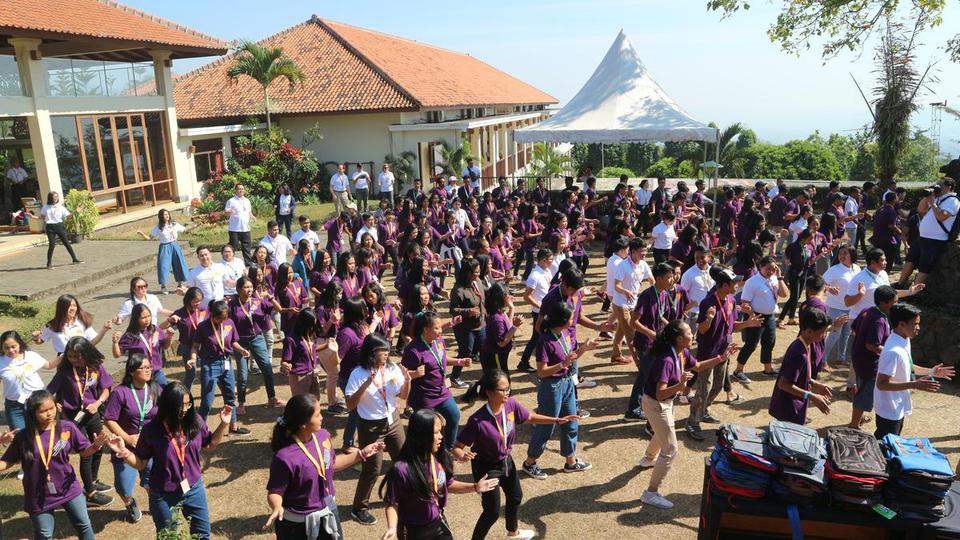 Hope remains the survivors’ beacon of strength despite losing everything. The first lady of Mandaue City and local government leaders expressed gratitude to the Church for providing resources.

Read more about the story on the Philippines Newsroom website.

Cambodia: “Project Hats” for Newborns in Cambodia
Sister Bev Armstrong accompanied her husband, Dr. Robert Armstrong, as he visited the health clinics in the outlying provinces of Cambodia. They are medical missionaries for The Church of Jesus Christ of Latter-day Saints. During their stops, Sister Armstrong noticed newborns wearing knit hats to retain their body heat, even in the hot weather.

Sister Armstrong saw the need these babies had and decided to do something about it. She started crocheting the little hats and dropping them off at the clinics she and her doctor husband served.

Find out much more about this story on the Cambodia Newsroom website.

Colombia: National Day of Religious Freedom Celebrated by the Country’s President
Iván Duque, the president of Colombia, met with 130 people, including Latter-day Saint leaders, to raise the awareness of the need to strengthen religious freedom.

“It is the duty of our society to reflect on how our families are being formed,” explained President Duque” The president also mentioned the importance of working together and generating good projects that continue to protect religious freedom in Colombia.

Go to the Colombia Newsroom website, in Spanish, for additional discussion on the topic.Mexico: Young Latter-day Saints in Cuautla, Morelos, Serve Their Community

Young members of The Church of Jesus Christ of Latter-day Saints joined forces with community and organization leaders to clean up the river that runs through Cuautla, Morelos.

One teenager explained the reasons for the youth and city partnership. He said it’s important that the Church shows an example of caring for the environment and following the teachings of Jesus Christ.

Read more about the project on the Mexico Newsroom website in Spanish.

Philippines: Latter-day Saints and Community Groups Are Earth’s Caretakers
More than 150 Helping Hands volunteers joined by other organizations participated in planting 7,000 mangroves seedlings along muddy river shorelines during the National Day of Service.

Latter-day Saint youth enjoyed the service and said they wanted to help protect the environment as well as serve in their community.

Dr. Nakamura began his career as a heart surgeon in Kumamoto in 1961, where he began research on artificial hearts. In 1967, he was awarded a fellowship with Cornell University in New York, where he relocated his young family. Dr. Nakamura worked alongside Dr. S. Frank Redo to construct various models of artificial hearts, transplanting them into German shepherds.

Read more about Dr. Nakamura and his contributions to medicine and the Church on the Japan Newsroom website.

Guatemala: Missionaries Paint Colorful Joy, Peace and Harmony Mural
Latter-day Saint missionaries recently painted an outside mural designed by artist Diana Sofía Zea, muralist of the Municipal Directorate for Women. Zea explained that “the mural represents the women of the area who express the importance of the family in aspects of life such as joy, peace and harmony.”

Service, rendered by the missionaries, is an important principle of the gospel, which is taught in the Book of Mormon: Another Testament of Jesus Christ.

Read more on the Guatemala Newsroom website in Spanish.

Indonesia: Latter-day Saint Youth Gain Greater Gospel Insights
Youth in the Church of Jesus Christ are given the opportunity during their time off from school to come together in a conference where they have fun, perform service and learn more about what they believe. Such was the case in Indonesia recently.

More than 200 Latter-day Saint youth, 14 to 18 years of age, from many parts of Indonesia, participated in the first Strength of Youth Conference.

Go to the Indonesia Newsroom website in Indonesian to read more about what the youth experienced.